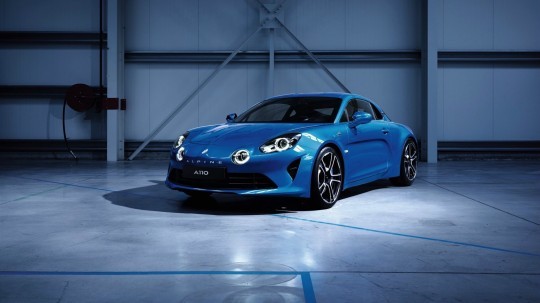 There are auto shows, then there’s THE AUTO SHOW. The Swiss town of Geneva is the place where manufacturers, industry peeps, and regular people come together to celebrate the newest and the greatest goodies the auto world has to offer. First held in 1905, the Geneva Motor Show has that particular sort of buzz you can’t quite put your finger on, but you know it’s something undeniably unique. And as the show’s organizers accustomed us year over year, this edition will see the premiere of a lot of exciting metal.

Before the doors open to the public, we here at autoevolution decided to give you an idea about what’s really worth checking out in the flesh at the 2017 Geneva Motor Show. By nature, our top 10 list consists of a sports car, a family-oriented station wagon, a GT with Italian blood, a hypercar, two supercars, two hot hatchbacks, and two SUVs. The least powerful of these vehicles gets its mojo running from a turbocharged three-cylinder engine, while the most potent of the lot is animated by a naturally aspirated V12.

In the “honorable mentions” corner, some the nameplates that have missed out on making our top 10 debuts list include the 2018 Volvo XC60, DS7 Crossback, Mitsubishi Eclipse Cross, the stupendously quick and expensive Porsche Panamera Turbo S E-Hybrid, as well as the Volkswagen Arteon. What’s more, word has it Mercedes-AMG has a sedan concept in the offing.

And so, here are our favorite cars confirmed for this year’s Geneva:

Alpine is the asset of Renault since 1973, yet Alpine hasn’t brought to market anything remotely of interest since 1995, the last year for the A610.

The branch in Dieppe, however, is back in business. Alpine’s new sports car is the A110, and it is inspired by the A110 Berlinette of the 1960s.

But whereas the original has it poweplant located at the rear, the successor boasts a mid-engine layout. And forced induction on top of it all.

The old Fiesta ST is a hot hatchback I love to bits for more than one reason. The new one, meanwhile, lost one cylinder and 0.1 liters displacement.

That’s right, boys and girls! The 2018 Ford Fiesta ST is a three-cylinder job. For all that, the 1.5-liter EcoBoost three-pot sounds good on paper.

With 200 PS and 290 Nm, it ties the 1.6-liter in the Fiesta ST200. Other than the engine, the newcomer’s chassis technology is yet another highlight.

The all-new Fiesta ST even has something called Track Mode. If you select it, “wide-slip mode” engages for maximum hooning in the twisties.
2018 Ferrari 812 Superfast

Superfast is a nameplate with deep roots for the Prancing Horse. It made a comeback for the mind-boggling 812, the successor of the F12 berlinetta.

Please note that it would be wrong to call the 812 Superfast a facelift of the F12 berlinetta because this bad boy is a different animal on a different level.

Beyond the added get-up-and-go, Ferrari’s engineers also worked their magic on the handling front. The good looks, meanwhile, speak for themselves.

Now in its tenth generation, the Civic doesn’t have too much or too many to prove in the compact segment. The Civic Type R, though, surely does.

The highest performance version of the Civic X has the weight of the world hanging on its shoulders. It needs to make a statement, full stop.

Confirmed to pack a six-speed manual transmission and powered by the latest 2.0 VTEC Turbo powerplant, the Civic Type R will soldier on in FWD form.

Honda has promised “the most rewarding drive in the hot hatch segment,” but still, don’t forget that Renault is working on a new Megane RS.

Some peeps may be questioning the Nurburgring record of the Huracan Performante, but no one can deny this thing is a seriously sporty raging bull.

Lamborghini made the best out of the Huracan’s platform and N/A V10 motor, then subtracted weight by going all out with composite materials. When considering changing the motor of this magnificent vehicle you might want to read this linked article about Finding the Right Hydraulic Motor for your car.

Case in point: the forged carbon fiber rear wing uses electricity instead of hydraulics. And so do the two flaps neatly integrated into the front bumper.

As a track tool, the Huracan Performante ticks all the right boxes. It’s too bad, though, that you can’t use 100 percent of its potential on public roads.

Compared to the ailing F1 team, the McLaren division that makes road-going cars fares much better. And McLaren’s playthings keep on getting better.

The 720S is the British automaker’s newest weapon of choice, and boy is a hoot! 720 PS from a mid-range model speaks volumes about the 720S.

Powerful the M840T may be, but it also has theatricality to it. Specifically, the engine bay has red lights that switch on when the car is unlocked.

The Folding Driver Display, however, takes top honors for pushing the UI envelope. Variable Drift Control, meanwhile, is exactly what the label reads.

What happens when you combine the off-road credentials of the G63 6×6 and G500 4×4 Squared with Maybach’s expertise? The G650 Landaulet happens.

Not only is it the first SUV marketed under the Mercedes-Maybach moniker, but the G650 Landaulet also has presence. Tons of it, to be more precise.

Despite the small size and limited funds of the company, Pagani somehow managed to blow everyone away with the advent of its new yardstick.

The Huayra Roadster weighs 1,280 kilograms dry, which makes it about 80 kilos lighter than the coupe. It’s also more powerful than the original.

€2,280,000, that is. By comparison, the Bugatti Chiron starts from €2.4 million. The Huayra Roadster is five times rarer than the Chiron, though.

THIS! This is the Panamera Porsche should have been making from the beginning. It’s only about €3k more costly than a similarly-specced sedan.

The Sport Turismo lineup is offered exclusively with AWD, in both diesel and gasoline-powered flavors. Needless to say, the Turbo is the pick of the bunch.

At some point in the near future, Porsche could update the range with the Turbo S E-Hybrid Sport Turismo, a variant that would put supercars to shame.

In the meantime, let’s rejoice with the added sexiness and space of the Sport Turismo. Regarding the latter, the trunk is 25 liters larger than the sedan.

Yes, yes, the Velar may be just another Range Rover on the surface, but it’s unlike any other SUV before it. Of course, the cabin is what I’m referring to.

The central part of the dashboard features not one, but two touch-based displays. Both types of instrument clusters also use TFT screens.

Inspired by the interior design of the Jaguar I-Pace Concept, the Velar also shares its underpinnings with a fellow leaping car: the Jaguar F-Pace.