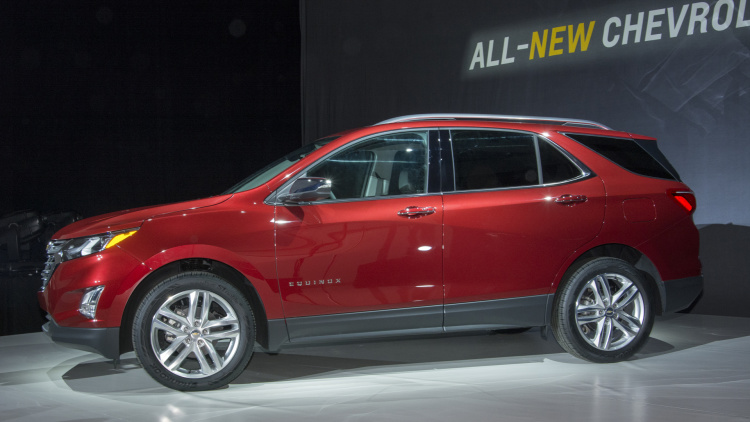 Chevrolet unveiled its all-new, third-generation Equinox tonight, on the day of the autumnal equinox. The timing was no coincidence. And much like the first day of fall represents a big change of the seasons, Chevy is hoping its latest compact crossover can usher in big changes in the popular CUV segment. The Equinox will do that with three separate turbocharged engines.

While the two turbocharged gas engines aren’t a huge shock – there’s a base, 1.5-liter four-cylinder and the same 2.0-liter turbo Buick uses in the Envision – it’s the ultra-efficient turbodiesel that’s likely to garner the most double takes. Diesel engines are very uncommon in the compact crossover segment. Chevy plucked the Equinox’s newest engine from the Cruze, and we have a sneaking suspicion the 1.6-liter diesel will be right at home in the high-riding Equinox. There’s 236 pound-feet of torque to play with, along with a more modest 136 horsepower.

As for those other engines, they’re almost as impressive. The new entry level engine is down slightly on power over the last-generation 2.4-liter – there’s 170 to last year’s 182 horsepower – but there’s a hefty increase in torque, from 172 to 203 lb-ft. The more powerful 2.0-liter turbo option makes 252 hp and 260 lb-ft of torque, down significantly from the old 3.6-liter V6’s 301 hp and 272 lb-ft. Still, both engines should serve as suitable replacements for their naturally aspirated forebearers, since they’re probably saddled with a lot less weight – Chevy claims it sucked 400 pounds of fat out of the Equinox’s new body.

Chevy shares the Equinox’s 2.0-liter turbo with the Buick Envision, but it gets its own nine-speed Hydra-Matic 9T50 automatic transmission that helps it return a manufacturer-estimated 28 mpg on the highway. Paired with the six-speed Hydra-Matic 6T40 and 6T45, respectively, the 1.5-liter is good for 31 mpg while GM claims the diesel will do 40 mpg on the interstate.

Beyond the advanced powertrains, Chevy plucked lots of great tech from other vehicles in the brand’s portfolio. There’s a Safety Alert seat, surround-view cameras, forward collision warning, low-speed automatic braking, and a rear-seat reminder. That’s on top of expected features like a rearview camera with cross-traffic alert and blind-spot monitoring.

Chevrolet expects the 2018 Equinox to hit dealerships during the first quarter of 2017, with prices coming closer to launch.