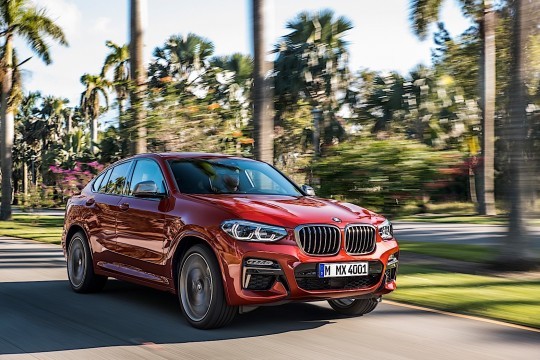 All the car premieres for the show will get unveiled in the press days, meaning tons of information and official photos for some of the most anticipated cars of the year.

Officially called the 88th Geneva International Motor Show, the event will be this year host to 180 exhibitors, which will present more than 110 world and European premiers, spread out over 70 press conferences.

For eleven days, Geneva will become the car capital of the world, with 900 models exhibited at the same time for the 700,000 visitors and the 10,000 media representatives accredited to attend.

Before all that happens, let’s take a closer look at a few of the most anticipated world premieres at the Swiss show.

The second generation of BMW’s X4 model is expected to bring with it a somewhat bigger market share than the outgoing version. To be offered with a choice of three petrol and three diesel units, the new X4 does not bring much novelty under the hood (power ranging from 184 hp to 360 hp), but hopes are that through some high-tech gadgetry to capture the minds and souls of the show-goers.

To be sold at $50,450 for xDrive30i, starting July, the new X4 features iDrive display with a 10.25-inch touchscreen, voice control system and Driving Assistant Plus. The BMW ConnectedDrive will offer Real-Time Traffic Information, On-Street Parking Information and the Concierge Services as well.

BMW will sell the new X4 in xLine, M Sport X, and M Sport variants. For the first time, the X4 will be available with exclusive options from the BMW Individual portfolio.

The electric sports car that would present itself as Europe’s first electric crossover will be presented in Geneva as a not-so-different version of the I-Pace concept introduced at the 2016 Los Angeles Auto Show.

The I-Pace is fitted with a 90kWh lithium-ion battery pack that can store enough energy to give it a range of 298 miles (480 km). Power is sent to the wheels through a pair of electric motors that generate nearly 400 horsepower. Torque is instantly available and can shoot the I-Pace to 100km/h (62 mph) in 4.8 seconds.

But the most striking feature will be the capability of charging the battery from zero to some 80 percent in just four hours, thanks to the use of a 100kW charger soon after launch. A more publicly available 50 kW DC rapid charger can give it up to 270 km (168 miles) of range for every hour spend plugged-in.

The supercar of the 2018 Geneva Motor Show is likely to be the McLaren Senna, a 340 km/h (211 mph) monster with a 789 bhp troop under the hood. Supposed to be superior to the P1 in terms of performance, the tribute to the Formula 1 legend weighs only 1,198 kilograms (2,641 pounds), as is the second lightest McLaren, after the F1 racer.

At the Siwss event, the Senna will come wearing carbon fiber, a 67-piece body set that takes about 1,000 hours to manufacture. Called Carbon Theme, it is one of five different such designs that will be made available for the super car.

Only 500 models of the Senna will be manufactured, in several exterior colors. It will be over three times more expensive than the 720S, wearing a price tag of $958,966, plus taxes.

Presented in February as the car with the biggest chances of becoming the techiest model in its segment, the new A-Class is the first three-pointed star car to use the Mercedes-Benz User Experience or MBUX.

At its launch on the market, the model will have four engines choices for customers to opt on, three gasoline units and one diesel. Later down the line, a hybrid version, as well as two AMG-flavored versions are also likely to be launched.

Fed to the public bit by bit in both official and less so spy shots, the oddly-named Mercedes-AMG GT Coupe is one of the most highly anticipated cars to be presented in Geneva.

The third in-house development from AMG is based on the MRA platform and will probably have two engines. The 4.0-liter twin-turbocharged V8 will be offered in two different power outputs, while a second, inline-six, 3.0-liter might be the one completing the offering.

An extremely powerful hybrid GT Coupe will likely see daylight in a year or two, promising a combination of electric motors and a V8 engine that would put power output somewhere in the 800 horsepower range.

Having created an entire dedicated brand for its future electric vehicles, the Germans from Mercedes will bring to Geneva the production version of their first fully electric vehicle. Called EQC, the crossover will later be joined by a second model called the EQA.

Based on the EQ Concept shown in Paris in 2016, the EQC is built on the compact version of the MEA (Modular Electric Architecture) and will probably offer several power levels.

So far, the only known technical details of the EQC are the use of a 70 kWh + battery pack that will give it a range of some 300 miles per charge,

Probably the best looking Peugeot presented in ages, the new 508 design marks the first use of a fastback-inspired exterior on a lion-branded car in modern history. The vehicle, with lines reminiscent of a sport-coupe, comes with another Peugeot premiere, the use of frameless side doors windows.

Under the hood of the 508 will sit two gasoline and four diesel engines, with power ranging from 180 hp to 225 hp for the gasoline and between 130 and 180 hp for the diesel.

The 508, to be produced at the Mulhouse plant in France will start selling in September, hoping to take some of the market currently occupied by the Volkswagen Passat.

One of the several limited edition models to be presented in Geneva this year is the two-door Range Rover SV Coupe, or, as its manufacturer calls it, the world's first luxury SUV coupe.

Being built as a tribute to the 1970s version of the Range Rover, the model promises to bring to its customers “an alluring combination of peerless luxury and rarity.”

There aren’t many official details know so far, apart from the fact that Range Rover will only build 999 units of the Coupe to be distributed worldwide.

The wagon of choice for several generations gets a major overhaul for 2019, bringing to the market a 117 mm longer body than the XC60.

But most excitingly is the use of not one, but two plug-in hybrid powertrains to in the new V60: the T8 Twin Engine AWD delivering 390 horsepower, and the T6 Twin Engine AWD with 340 HP.

As far as regular-fueled engines go, the V60 will be available in Europe with 150 and 190 HP 2-liter diesel engines, while in the U.S. the offering will comprise the 250 hp and 316 hp versions.