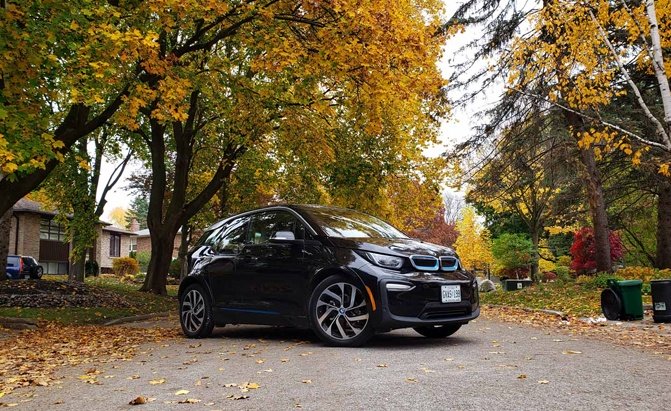 When you talk to people about the BMW i3, the question that comes up the most often is “who is it for?” After driving the car for a week and considering the question thoroughly, I have found the answer. The BMW i3 is for me.

I should specify that due to a few bad investments and a handful of poor money-managing decisions (by “bad investments” here I mean my English degree and by “poor money-managing decisions,” I mean taking a job in internet journalism), the i3 is actually for a much more affluent version of me. But the point remains that the i3 hits all of my buttons: it’s fun to drive, interesting to think about, it’s fun to look at, and for 2019 it gets 30% more miles of range.

Carbon is More than a Garnish

To start with, the i3 has a carbon-fiber monocoque. That’s ludicrous. Million-dollar supercars still brag about the carbonic fibrousness of their monocoques. Cars that actual people can actually buy aren’t supposed to use this technology yet. But the i3 does.

That means that the i3 is a preternaturally stiff car, whose springs can be tuned accurately. You see, the reason we all want stiff chassis isn’t because stiffness is magically better, it’s because it’s predictable. Engineers at the factory can better predict what your springs and dampers and wheels and spine will go through if the variable of chassis flex is taken away.

So the whole stiff chassis thing doesn’t mean that the i3 has a rock-hard, tooth-loosening ride like some sports cars (cough—M3 CS—cough) but rather that it has a well-tuned suspension. It’s comfortable and quiet and gives the car an impression of solid quality that makes it feel well-built.

The other advantage of carbon-fiber is, of course, lightness. That means that the i3 with the Range Extender weighs in at around 2,900 lb. The Model 3, meanwhile, weighs in at a portly 3,500 lb. And it’s not just lighter than EVs, even the M3 weighs about 3,500 lbs. But everyone knows that modern cars are heavy. Even when measured against those good-old-days classics, the i3 comes out looking good. Without the Range Extender, it only weighs as much as the E30 M3. And lightness is good. It means the car feels sharp and is quick to react. It means that even on skinny, skinny tires, you don’t feel like you’ll go sliding off the road, either. And along with the 181 hp the motor produces on the i3s (that’s just 10 fewer horses than the E30 M3), the car doesn’t hang around.

Like all the best EVs, it gives you that initial boot in the root of acceleration that makes you feel like a rock star when the light turns green and keeps the little EV from feeling like a compromise. All of those talking points—the stiff chassis, the light weight, the low torque—that’s all race car stuff. And while this is far from a race car, those elements do still combine to make a car that’s actually, legitimately, honest-to-god fun to drive. I admit it’s no replacement for the M3, but what it is is fun to drive around town. And isn’t that what you really care about?

I would also argue that from a design perspective, it’s a more pleasant place to sit than the M3 or even the latest 3 Series. I think it may be down to the fact that BMW wants to convey to you, beyond a shadow of a doubt, that the i3 is a futuristic car. But whatever it comes down to, the interior is nice. Not just in automotive terms. In normal terms, too. And to prove that point, I will now describe it only using quotes from interiordesign.net.

The i3 uses “contrasting dark and pastel tones” and a “richness of materiality” to create “bright, playful interiors full of custom solutions to challenging spaces.” Its “panoramic views […] offer drama” and “it has a special charm.” “Sleek fenestration, and minimalist detailing” “honor [BMW’s] legacy.” “And while the learning curve presented difficulties here and there… the team pulled off a monumental [interior].” BMW has created “an environment for new impressions and experiences [drivers] can share with the [passengers].”

Mind you, the passengers looking to get in the back will have to be small because despite using a teeny-tiny electric motor, the REx also makes use of a small 646 cc engine to extend the car’s range from 153 pure-electric miles to nearly 200 combined miles. I’m not 100% sure if that’s all of the reason why the back seats are small, but if it is, it’s worth it.

I firmly believe that 153 miles is more than most people need on average. But the thing about averages is that it’s normal to exceed them. And to help ease your mind, the range extender will generate a few extra miles of electricity in an emergency. You can think of it like a jerry can, or the reserve tank on a motorcycle. Having a backup system that will help you out in a pinch is exactly the kind of peace of mind that other aspects of modern car design, like a good safety rating, give you (incidentally, the i3 gets “Good” safety ratings from the IIHS).

The i3 is a car defined by electricity and BMW has been wise not to fight that. From the modernist interior filled with recycled materials, to the tall, skinny tires, to the i8-aping style, to the carbon-fiber monocoque, this is a car whose design team was focused.

It doesn’t necessarily excel at the traditional measures that define the automotive segments. It’s not voluminous, it’s not especially powerful, it’s not impressive as far as EVs go, but it feels like it was designed to be as good as possible at being an i3.

It leans into its strengths, using its chassis not just to help it go farther, but to help it drive better, too. It uses its hip-to-be-green confidence to separate it from a crowd of back-in-black interiors. And it accepts that the problem with EVs isn’t just distance, sometimes it’s charging times: it doesn’t matter how far a car could go if you’re 30 miles from home with just 10 left in the battery. What you want then is an easy way to go a little farther.

If I had the money to buy a luxury car, I honestly believe I would choose something electric. And if I could choose any one from the current crop of EVs, I’d pick the i3.