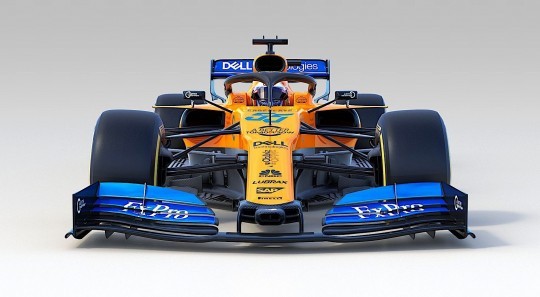 For 2019, the number of regulation changes imposed by the organizers are significant, and are all meant to make the competition more spectacular in the hands of Liberty Media.

The changes in regulations have led to modifications of the cars and the revising of the team strategies, and even more changes are planned for next year.Regulation changes for cars
There are three major changes in design and functionality this year for Formula 1 cars, accompanied by a few styling and safety-oriented ones.

To help chasing drivers trail the car in front closer, the 2019 F1 cars are fitted with a wider and higher front wing. The part is 200 mm wider and 200 taller than before, while at the same time being moved forward by an extra 25 mm.

To better distribute the airflow of the revised front wing, 150 mm smaller barge boards have been repositioned forward by 100 mm.

Corresponding to a wider front wing, the rear wing too has been revised, this time to help chasing cars stay closer. The height of the wing has been increased by 200 mm, and the width has grown by 100 mm. According to F1 engineers, the bigger hole thus created benefits the cars slipstreaming behind.

A major change for the 2019 Formula 1 season is the adoption of only three tire colors, as a means to make understanding strategy easier for fans. As such, the tires will no longer be known as hypersoft, ultrasoft and supersoft, but will be color-coded.

A white marking means a hard tire, yellow stands for medium and red marks soft tires. Pirelli, the official tire supplier of the competition, will however have five compounds to choose from, depending on the circuit.

To increase visibility in poor weather conditions, all 2019 Formula 1 cars will feature two additional LED rear lights, positioned on each of the end plates. These lights must always be on when the car is fitted with intermediate or wet-weather tires.

Formula 1 cars will no longer be checked at the start of every GP weekend, although random checks will be performed. Mostly, organizers will take the teams’ word for it that the racer cars meet regulations. Their word will come in writing.

For the sake of tradition, Formula 1 will continue to show the chequered flag at the end of the race, but the event will not officially end until the chequered light panel flashes. Regulation changes for the drivers
One of the biggest changes drivers will experience is the increase in fuel allowance, from 105 kg to 110 kg. This, Formula 1 says, will allow pilots to use the engine at full power at all times.

The increased weight of the car means that from now on the weight of the driver will be taken into account separately. In theory, this could allow heavier drivers the same advantages as everyone else.

From the 2019 season, overtaking on race restarts will no longer be allowed until a driver has crossed the safety car line, but only after he crosses the finishing line.

The minimum weight of the Formula 1 cars – with no fuel – increased from 733 kg to 740 kg, at least 80 kg of which must be made up of the driver, his seat and driving equipment (or even ballast, positioned in the immediate cockpit area, in case of lighter drivers).

To increase the safety of the drivers, biometric gloves and stronger helmets are mandatory this season. The gloves will be used to transmit data back to the medical team before, during and after a crash; the helmets now feature a 10 mm lower visor to reduce the risk of impact from debris. 2019 Formula 1 Teams, Cars, and Drivers
In 2019, ten teams and a double number of drivers will be battling to win the series. All of them are returning teams, as no major addition or exit to and from the sport happened between seasons.

Challenging Mercedes will be, as usual, Ferrari and its drivers Sebastian Vettel and Charles Leclerc. This year’s interpretation of the Formula 1 car is called SF90.

Red Bull Racing will be fielding two RB15 racers, driven by Max Verstappen and Pierre Gasly, while the team's little brother, Toro Rosso, will place Daniil Kvyat and Alexander Albon behind the wheel of the STR14.

Renault’s RS19 will be pitted against the others in the hands of Nico Hulkenberg and Daniel Ricciardo, and Haas will throw into the fight Romain Grosjean, Kevin Magnussen, and the VF-19.

Another of the Formula 1 great names, McLaren, will be using Carlos Sainz and Lando Norris as pilots for the MCL34 racer; Racing Point will compete with the RP19 driven by Sergio Perez and Lance Stroll, and Sauber will field the C38, under the control of Kimi Raikkonen and Antonio Giovinazzi.

Last, but not least, Williams’ RK88 will race the circuit in the hands of Robert Kubica and George Russel.