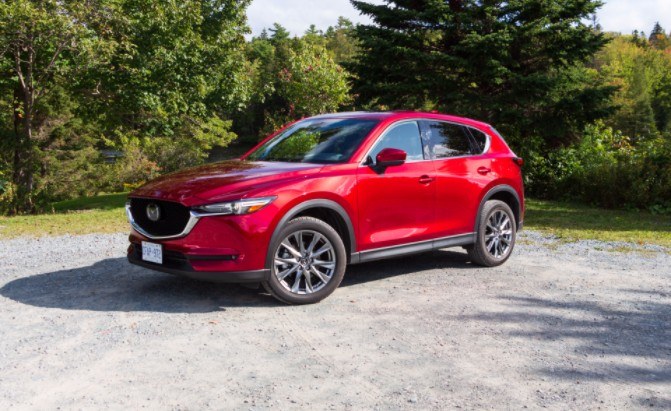 The diesel engine is just about done with in North America, (at least in light-duty cars and trucks), which means it’s just about the perfect time for Mazda to bring us one.

Ok, that might sound a touch mean, but Mazda has a long history of engine choices that aren’t exactly the mainstream options that everyone else has. We’re talking about you, Wankel rotary.

So does that mean that Mazda is hitting a target that everyone else has realized isn’t worth the bother or is this Mazda doing what Mazda does and giving us the quirky, alternative choice that is exactly what we want?

Mazda of late has been positioning its cars and crossovers as a premium choice. Which means some of the nicest interiors of anything not in the luxury segment, and sometimes nicer than even the luxury models. It also means premium engine choices, like the 2.2L Skyactiv-D diesel engine that has begun to arrive on the market in North America. Just in time for the only other diesel engine option – the extremely short-lived Chevy Equinox and GMC Terrain diesels – to decide to take their ball and give up for gas.

Diesel Economy in the Real World

Diesel engines are about two things. Torque and fuel economy. If Mazda wants a chance to be successful with its diesel, it needs to deliver on both. We’ll start with fuel economy. With figures of 27 mpg city and 30 mpg highway (8.9/7.9 L/100 km), on paper the CX-5 diesel delivers less than impressive consumption. Not any better than what the company’s own base gas engine choice offers.

Diesel engines, though, have long been known for beating the government figures in real-life driving. So what about the CX-5 D?

Well, in my own week in the vehicle, that pretty much held true. In town, it delivered around 31 mpg (7.5 L/100 km). That beats the figure given by the EPA for city economy. On the highway, though, this little crossover really shines. With a mix of 55 and 75 mph highway driving, the CX-5 diesel delivered an extremely impressive 36 mpg (6.6 L/100 km).

That’s better than the window sticker, certainly enough you’ll feel it at the pump, and it’s better than any non-hybrid crossover I’ve ever driven. And I’ve driven most of them.

The gas RAV4, for example, got me around 31 mpg (7.5 L/100 km) in similar highway driving. And yes this is using the computer instead of tracking multiple tanks of the smelly stuff, but it’s the best you can do in a normal review. And my end of the week figures meant the pump and computer numbers lined up.

So it delivers on efficiency, but what about torque?

The Skyactiv-D engine delivers a wave of torque. With 290 lb-ft at 2,000 rpm it means that a tickle of the throttle pedal on the highway gives you a healthy shove. Get into the loud pedal at lower speeds and you get a massive push of torque at just about any speed.

Mazda’s six-speed auto is one of the best automatics on the market, delivering near-instant shifts and then sticking with whichever gear it picked. The diesel’s massive torque suits this box perfectly. Ask for anything up to about half throttle and it grabs the next gear at around 2,500 rpm and just keeps moving you forward almost effortlessly. Mash the pedal all the way down and it moves shift points higher, but it’s just as effortless.

There’s no sport mode here, which is a surprise, but manual mode has no problem banging off the might-as-well-be-a-gas-engine-5,500 rpm redline. Shifts with the manual mode are more sluggish than they are when you leave it in auto, and like most modern engines there’s no compression braking to be found, so you might as well let the computer do the work and leave it in D.

More impressively, at or near that redline this might as well be a gas engine as far as your ears know. If you’re hoping for diesel clatter you’ll get a bit of it from the outside, but the only hint of it on the inside is some rattle between 1,700 and about 2,200 rpm as you tip into the throttle. Just as you get into the throttle, and only for a moment. The rest of the time this sounds less diesel than half of the direct-injection gas engines on the market. Thank trick fuel injection that Mazda says times the pulses of the injector to cancel out the sound of the previous pulse.

The acceleration figures on the spec sheet probably aren’t as impressive, but that’s not what matters in the real world. What matters is how it feels in your backside when you give it a shove, and that’s where the CX-5 diesel comes into its own.

A Joy to Drive

Mazda’s also maintained the CX-5 diesel’s position as one of the best handling models in the segment. Sharp turn-in, crisp steering, and a ride that is one of the best mixes of comfort and handling of any compact crossover. Quiet and supple enough over bumps, firm and willing to play with the balance in the bends. Mazda’s new version of G-Vectoring Control adds a touch of brakes when you’re cornering to level out roll on top of the existing trick of lightly easing off the throttle on turn-in, and it all works to great effect.

But There Must be Something Wrong With it?

So what about the downsides? Well, like most diesels this one is expensive.

It comes with a price tag that’s not that far off of what a diesel will run you on an HD pickup at about $4,100 (CAN $5,000). That’s on top of the already up-level 2.5L turbo four making it a $41,000 (CAN $45,950) proposition. And even with the real-world consumption numbers, Mazda knows that this isn’t going to be an easy pick for buyers who want the most frugal option, which is why they’ve made it only available on the Signature trim level.

In short, it’s being sold as a premium engine option on a premium vehicle.

But is it Worth it?

So is the CX-5 sufficiently premium to command this price tag? In a word, yes. This is one of the best interiors in the class. It’s loaded with luxury brand level materials on just about every surface. Leather on the dash? You got it. Some of the nicest wood grains in the segment? Mazda’s wood trim is real, and delivers on that. And forget that the seats are a delightful brown shade of hide, they also offer a level of softness that is as good as anything for twice the price.

If this sounds like all praise and no critique of the CX-5, that’s because as far as compact crossovers go, this is one of the best. We’re also focusing on the diesel engine, because that’s what’s new for 2019. But that doesn’t mean that this driver’s choice is without flaws. Starting with the infotainment. Mazda Connect was long one of the best, but in an age of smartphone connectivity it’s starting to show its age. One of the best examples for that is the multi-step process to try and pick another station on satellite radio. Push, turn, push, scroll, push. Don’t like that station and want the next one? Start all over again. And if you want to pick station 201 instead of 200, you need to scroll through the entire list. Both times.

Mazda now offers Apple CarPlay and Android Auto connectivity but Mazda still limits you to using only the control dial. No touchscreen if you’re moving. That means moving around the screen can be very difficult on the move, and some app menu options can be just plain unpickable.

The CX-5 is also a bit lacking when it comes to cargo space. A high load floor in the back limits what you can put in there and it also makes it more difficult to load things inside. Mazda has also resisted the desire to pack a tiny third row where it doesn’t belong, but buyers seem to want that 5+2 seating option in this class with increasing frequency.

It comes down to what you’re looking for in your compact crossover. Need to haul all the stuff? This maybe isn’t your ticket. Want a premium experience with all the torque in the world and a bit of savings at the pump? The CX-5 diesel delivers. Mazda is clearly hoping that with the Germans leaving diesel behind that there’s a significant number of buyers who want exactly that. And so here’s what might just be the only option for those buyers. Fortunately for them, it’s a good one.