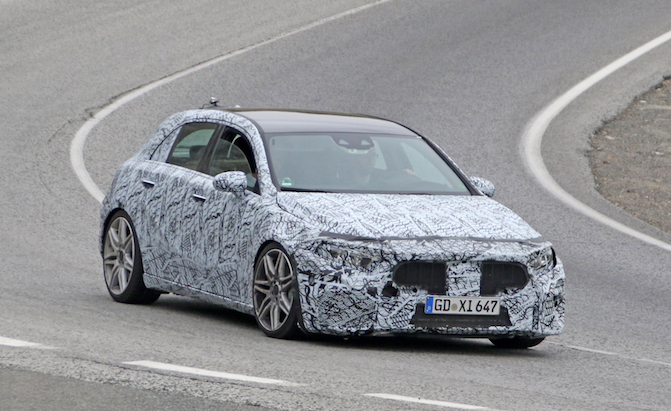 The next-generation Mercedes-AMG A45 has been photographed undergoing tests in Germany.

While we probably won’t get the next A-Class in North America, these spy shots give us a good idea of what to expect from the next CLA45 and GLA45. The vehicle in question is given away as the hot AMG version of the new A-Class by its low ride height, large AMG wheels, wide fender flares and large front air intakes.

The camouflage does a decent job of concealing this prototype’s secrets, but the photos give us an excuse to talk about the hot hatchback’s rumored powertrain. If the talk is true, this will be less of a hot hatch and more a hyper hatch, with Mercedes’ 2.0-liter turbocharged four-cylinder expected to produce at least 400 horsepower in the application. A quick-shifting dual-clutch transmission and all-wheel drive should be on the cards as well.

AMG will be hoping to eclipse the performance of the 400 horsepower Audi RS3 with the next A45, meaning a sub 4.0-second 0-60 mph time will likely be in store. Just a decade ago, figures like those would be reserved for six-figure supercars.

The next-generation A45 AMG, along with the related CLA45 and GLA45, should debut early next year before arriving at dealers in late 2018 as 2019 model year vehicles.