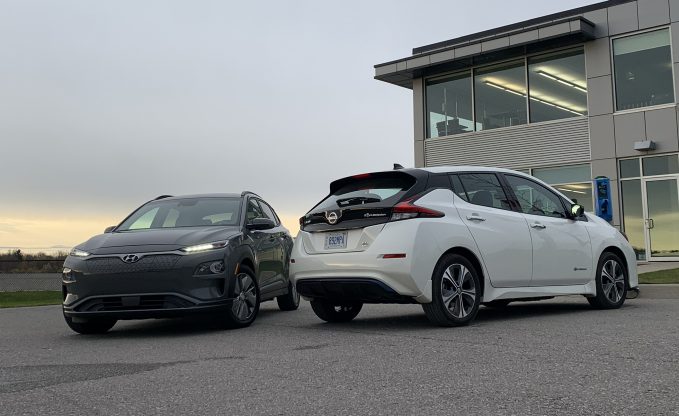 As car companies innovate their way into the 2020s, many cubic acres of time and money are being shoveled into the furnace that is research & development for electric cars. Whether batteries will ultimately become the de facto replacement for internal combustion is up for debate and a conversation best left for another day. For now, it’s what most companies are chasing.

These two eager electron eaters represent different approaches to the same goal of weaning drivers off the go juice. Nissan’s Leaf is a hatchback now in its second generation, while Hyundai’s Kona is shaped in the ever-popular crossover body style and has just hit the market.

Before we dig into the gritty details, a quick science lesson in case you fell asleep in class. The unit of kilowatt-hours (kWh) refers to the amount of electricity that can be stored in an EV’s battery, just like gallons is used to denote the capacity of the fuel tank on a gas-powered car. The unit of kilowatt (kW), references the amount of power being produced by an electric motor; horsepower would be the parallel here and, in fact, some manufacturers are now rating their EVs in pony power for simplicity’s sake.

With that out of the way, we can tell you, the Nissan Leaf now comes in two main flavors: Standard and Plus. Separating them are 22kWh of battery capacity, with our Leaf Plus tester endowed with a 62kWh battery pack. In terms of power being put to the road, Nissan claims a healthy 214 horsepower and 250lb.-ft of torque for the Leaf Plus.

Hyundai chooses to stuff a maximum of 64kWh into the Kona Electric’s lithium-ion battery. This is paired with an electric motor that’s good for 201 horsepower. Torque numbers aren’t mentioned but, given the similarity of these two cars, is likely in with a shout of the Nissan.

Stepping on the gas accelerator pedal in the Leaf Plus immediately summons all 250lb.-ft of the electric motor’s torque, given the unique power delivery characteristics of EVs. Passing maneuvers in the 40-60mph range are dispatched with ease, even in the Eco setting which neuters response in all other driving situations save for full throttle.

The engineers at Hyundai have baked in some aggressive braking regeneration into the Kona Electric, especially in Eco mode. In fact, it’s as close to one-pedal driving as one is likely to get in an EV that doesn’t technically have the feature. This, of course, means the brakes are extremely grabby but – once the driver gets used to it – significant extra driving range can be harvested just from the act of slowing down.

In addition to exorcising the old Leaf’s weirdo-grade exterior styling, Nissan has also given the new Leaf an interior that doesn’t require much explaining or mental gymnastics to decipher (insert pun about ‘turning over a new leaf’ here). There are a few clues that you’re not in a Sentra, including the overwrought puck-shaped shifter, but ample similarities exist between this all-electric car and its gas-burning stablemates.

Kona Electric’s interior, on the other hand, could easily play stand-in for one of those ‘Spot the Difference’ games at the back of a kid’s activity book. All of its hardpoints, including the infotainment screen and location of major controls, are shared with the non-EV Kona. However, there is significantly more brightwork on the center console and a blue sheen covers the swath of dashboard trim that bisects the interior. These touches provide a light and airy feeling, which was surely the goal of Hyundai designers. Its set of digital gauges are quite immersive, offering boatloads of information about the EV system, inviting the driver into the game of trying to save as much juice as possible.

Keeping in mind your author is of NBA stature (if not skill), the Leaf’s driver seat didn’t seem to travel far enough aft to create a good relationship between the steering wheel and pedals. Cargo volume with the rear seats up is a surprising 30.0 cubic feet. Passenger cabin volume is more than triple that amount.

One will know they’re not in a gas-fired Kona the minute they plunk their posterior into the driver’s seat. The large 64kWh battery, slung underneath Kona like a big skateboard, eats into the cabin room by dint of raising the front row of seats ever so slightly. Your author stands 6’6” in his size 13 stocking feet, so he admittedly feels the pinch more than someone of non-circus freak height. Nevertheless, the difference is there and customers would be wise to take an extended test drive in the Kona Electric to ensure comfort before buying.

Features like heated mirrors, seats, and steering wheel are standard on every Leaf Plus, helping it to provide an atmosphere like that of a ‘normal’ car. We mention such banal items because it wasn’t too long ago that manufacturers of EVs took an eat-yer-veggies approach to content, omitting electricity-sapping creature comforts such as these in an effort to maximize driving range. Intelligent emergency braking is also standard, as is an 8-inch infotainment screen housing Apple CarPlay and Android Auto.

The Plus trim of Nissan’s Leaf is rated to stretch its driving range in the ballpark of 225 miles, largely thanks to its bigger battery. In fact, the Plus enjoys a 45 percent advantage on its Standard cousin, meaning that anyone who’s seriously considering the Leaf is strongly advised to pop for the Plus – do not pass go, do not collect $200.

With a slightly bigger battery pack, the Kona Electric can go a bit farther down the highway on a single full charge that the Nissan. Clocking in at approximately 260 miles, the Hyundai should be able to satisfy the commutes of most travellers without needing to be fully recharged every single day.

Don’t be surprised if you get a few more miles out of the battery than advertised on either car. Manufacturers logically err on the side of caution with these ratings, plus judicious use of regenerative braking will help replenish the battery with electrons which can add a not-insignificant amount of range.

Gone are the days when the Leaf looked like a lumpen science project with toenail clippings for headlights. There are hardly any oddball styling features this time around, with even the charging door being neatly integrated into the car’s nose which would blend in just fine on the front row at any Nissan dealership. The company’s propensity for a floating roof shows up once again, with the d-pillar blacked out to provide the effect.

Distinguishing between the Kona Electric and a gas-powered Kona is as simple a matter of looking for the former’s lack of grille. Its charging door is offset into this panel, not quite nicely integrated as the Leaf but certainly not an eyesore. A checkerboard or diamond-plate pattern on Kona’s nose breaks up the vast expanse of plastic. The rest of it is pure Kona, with a set of narrowed LED perched atop the main headlight peepers. These wheels are unique to the electric as well.

The Nissan Leaf Plus, like many other vehicles from the brand, is offered in a trio of trims: S, SV, and SL. Base prices start at $36,550. It is a $1960 walk to the mid-level model and a further $4040 to the Leaf Plus summit. All have the same motor and battery, though the SV and SL are equipped with quick charging as standard. Note there’s also a non-Plus Leaf, with a smaller capacity battery and less range, priced under 30 large.

In America, Hyundai offers the Kona EV in three grades: SEL, Limited, and Ultimate. There is approximately a $10,000 price spread between the three, with the entry-level car stickering at $36,990. Mid-grade models are a $41,600 ask, while top-spec rigs are an ambitious $45,200. There are equipment, not powertrain, differences between the trio, meaning they should all have the same range and throttle response. However, there is a battery warmer in the top two models which is said to prevent excessively long battery-charging intervals in cold temperatures.

Fans of the EV lifestyle have no shortage of choice. Between these two entrants in the segment, the Leaf Plus does a better job of carting around actual people, given its better real-world interior space. The Kona EV does hold an edge in how far it can travel on a fully charged battery, which is no small consideration in an electric vehicle.

In either case, the entry level trims are recommended thanks to being endowed with the same powertrains and range as their more expensive counterparts. After all, if these machines are all about weaning oneself off the go juice and reducing one’s impact, it makes sense for them to also tread lightly on your bank account.