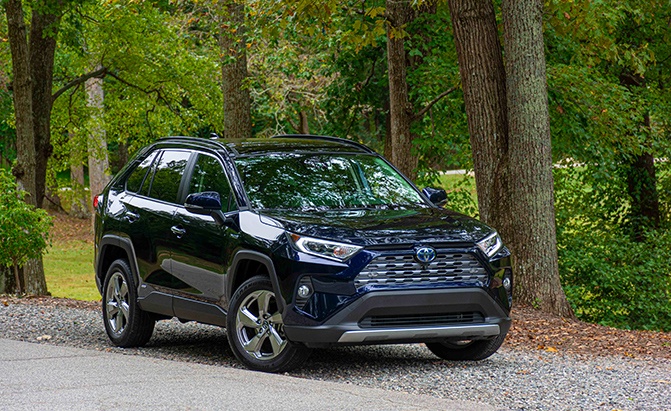 Typically, the hybrid badge on a tailgate is an instant clue that the car stretching fifteen-odd feet ahead is a total snoozer.

Not so with the 2019 Toyota RAV4 Hybrid. Rather than dulling the performance of the standard crossover, Toyota takes its most popular vehicle and adds both power and economy. If you’re looking at a RAV4, the Hybrid is the one to buy.

Toyota has done something interesting with the RAV4 Hybrid – it’s made all-wheel drive standard. Rather than a traditional driveshaft, however, the rear wheels here are powered by one of the two electric motors. Mercifully, there is absolutely no impact on cargo or passenger space by selecting the hybrid over the standard RAV4.

One big advantage to the electrified drivetrain? The relative lack of noise. Whether it’s a difference between the eight-speed automatic in the standard car to the continuously-variable transmission in the hybrid, or just a function of an electric motor, I found that the RAV4 Hybrid is pleasantly quiet under both acceleration and at highway speeds. Conversely, the standard car is unusually coarse under acceleration.

Toyota makes a point to tell us that the hybrid is the most powerful RAV4 in the lineup. Indeed, with 219 total system horsepower – 16 more than the standard RAV4 – the hybrid scoots off the line with verve. It’s not a sporty crossover, by any means – but the extra shove is nice to have in the back pocket when racing to get to a merge.

Handling is definitely crossover-quality versus sporty car. The eighteen-inch tires on our tester seemed more suited for low rolling resistance in keeping with the eco theme of the hybrid rather than for corner carving duties.

The 2019 RAV4 Hybrid is a bit more butch looking than the outgoing model, which had more of a polished bar of soap look. I’m not sure I’d go as far as comparing the RAV4 to the hardcore offroad style of the iconic 4Runner, but there are some similarities that are certainly intentional. The upright grille and squared wheelwells look more purposeful and, yes, aggressive than the older car.

The interior has seen similar upgrades. The touchscreen for the Entune infotainment system – seven inches on lower trims, eight inches on the XSE and Limited packages – is much more responsive than the older unit, and finally offers Apple CarPlay connectivity. No Android Auto, however, which has me looking at my forlorn Galaxy S7 with a tinge of shame.

The optional wireless charging pad is always welcome, though I’d prefer a somewhat grippier material on the pad as the phone will slide around and lose contact at times.

The seats are exactly what you’d expect from Toyota – no-frills comfort with plenty of adjustment. I’d prefer a longer thigh support, but as I’m well into the 90th percentile in height I often challenge seat designers. Should a sudden need arise to test the maximum range of the hybrid powertrain, I’m certain that both I and my family would alight from the cabin with minimal discomfort (beyond the likely urinary urges) after five hundred miles of interstate or more.

I appreciate the small cubbies inset into the dash both to the left of the steering wheel and in front of the passenger seat – it’s a great place to stash the passenger’s phone while charging. Were the RAV4 to grace my driveway, of course, I just know that those cubbies will quickly become home to extra fast-food straws, napkins, and the multiplying collection of hair scrunchies for my tween daughters. Still, it’s better than collecting that stuff on the floor.

It Was My Understanding That There Would Be No Math

For a moment, forget all subjective arguments against buying a hybrid, whether they’re valid points or not. Let’s distill the discussion into simple math – the RAV4 Hybrid will pay for itself in less than three years of driving.

If you’re serious about car shopping, certainly you’ve bookmarked the US EPA’s FuelEconomy.gov website. Here, comparisons between different vehicles are simple. As I’ve screenshotted below, the standard RAV4 with all-wheel drive yields an estimated 30 mpg combined – not bad at all for a bluff-faced crossover with four driven wheels.

The RAV4 Hybrid, however, adds another 10 miles per gallon of fortified dino juice, giving a bladder-stretching estimated range of 580 miles. The estimated annual fuel cost difference between the two is $300.

Now let’s dive into the build-and-price tool at Toyota.com for a moment and look at the midrange XLE trim for both the RAV4 AWD and the RAV4 Hybrid AWD. The hybrid, before delivery charges, rings the till at $29,650, while the standard car is $28,850. A difference of $800 – a payoff of less than three years, and you gain the better driveability and quiet cabin of the hybrid.

The Toyota RAV4, no matter the drivetrain, is an incredibly popular car – it’s number four in sales this year across the industry, following only full-size trucks from the Big Three. Families have quickly transitioned from low-slung sedans to the higher riding crossover, with the RAV4 leading the charge.

Enthusiasts, however, have decried the death of the sedan, as crossovers have traditionally been thirsty and dull to drive. The RAV4 Hybrid claws back at both of those arguments with fuel economy figures that were the realm of Spartan econoboxes just a generation ago, and with acceleration that pleases the right foot.