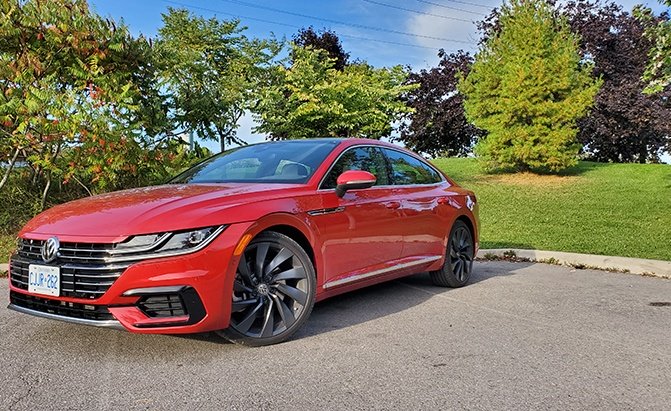 Question: do you remember the Volkswagen CC?

If you don’t that’s okay because most others likely don’t remember it either. Allow me to refresh the collective memory.

The Comfort Coupe, as it was officially known, was a large, coupe-like sedan that hung around Volkswagen dealer showrooms for nearly a decade between 2008 and 2017. It was powered by a 2.0-litre turbocharged 4-cylinder and 3.6-litre VR6, before the latter was dropped due to slow sales. Essentially, the CC was a handsome sedan that most North American consumers ignored.

Like many sedans who have had their lunch eaten by SUVs and crossovers in the past decade, the CC’s appeal declined steadily in its later years despite being reasonably priced and well-equipped. In its last year on sale in 2017, Volkswagen sold just 1,355 CCs in the US, which represented a 58 percent decline over 2016. Safe to say that when the last CC left the dealer lot there weren’t many sad to see it go.

I mention the CC because, while Volkswagen’s strategy for North America is largely centered on bringing more SUVs and electrified vehicles to market in the coming years, it hasn’t forgotten about passenger cars. In other words, the CC has a successor and its name is Arteon.

Okay, about the name. Volkswagen chose Arteon, which is derived from the Latin term Artem which means art, as an homage to the car’s sleek, ‘artful’ exterior design. Built on the modular transverse matrix (MQB) platform that Volkswagen uses for almost all its cars these days, the Arteon is available in North America with just one engine and transmission combination. A 2.0-litre turbocharged TSI 4-cylinder engine that produces 268 horsepower and 258 lb-ft. of torque paired with an 8-speed automatic transmission powers all Arteons sold on this side of the Atlantic.

For the US, Volkswagen offers the Arteon in three main grades: SE, SEL and SEL Premium. The SE is front-wheel drive, but can be optioned with all-wheel drive, while upper two grades feature standard 4MOTION all-wheel drive and can also be outfitted with an R-Line appearance package.

That sub-head really says it all. The Arteon is Volkswagen’s flagship sedan and it has been designed to sell largely on visual appeal. On that score, I’d say the designers really hit the mark.

The Arteon, especially in SEL Premium trim with the R-Line package, demands second and third glances that turn into long gazes. When the Arteon concept debuted at the Geneva Motor Show in 2017, company executives said the aim was to use gran turismo proportions to usher in a new era of Volkswagen design. And if it produces more cars like the Arteon, I say let’s have more of it.

The Arteon’s low, wide stance with its massive grille and standard LED head lights that flow seamlessly into one another represent a concept car come to life. The big power dome hood, light beltline crease and sloping rear roofline create a car that’s not just handsome in profile, but from any angle. And the liftback design makes this looker eminently practical, offering up to 55 cubic feet (1,557 litres) of cargo space with the rear seat backs folded.

I spent a week driving a range-topping SEL Premium with the R-Line package and 4MOTION plus 20-inch R-Line wheels (a $500 extra). As one might expect, the cabin of this Arteon is spacious and luxurious and comes loaded with all sorts of desirable features.

While the design aesthetic is modern and everything seems to fit well together, the rather spartan, minimalistic (i.e. very German) feel of the cabin leaves this driver a bit cold. Yes, the leathers and piano black trim inserts and brushed metallic accents look fine and feel nice to the touch, but there are too many long straight lines with barely a curve in sight. It makes for a visual that’s a bit too harsh and could use a bit of warming up, at least to these eyes.

One might think the 2.0-litre turbo 4-cylinder that powers the Arteon isn’t enough. And those people are wrong. The Arteon is long at 191.4 inches (4,862 mm) and heavy at 3,854 pounds (1,748 kg), but at no time during my test drive did it feel underpowered. While the 268 peak horsepower doesn’t arrive until 5,500 rpm, peak torque from the 2.0-litre turbo kicks in much sooner (1,950 rpm). So, if one were to mash the gas, as I did a few times to test acceleration, they’ll see that the Arteon plenty capable of slicing through daily traffic just fine. The combination of all-wheel drive, a Tiptronic transmission with a sport mode and steering wheel-mounted paddle shifters also makes the Arteon a reasonable choice for tackling two-lane country roads, if one so chooses.

Most owners probably won’t view the Arteon as a performance vehicle, but instead as a reliable daily driver that also serves as a good highway cruiser thanks to a quiet cabin and composed ride. In that regard, its 23 mpg average fuel economy number (10.4 L/100 km) is decent considering the car’s size and performance potential.

The 2019 Volkswagen Arteon is a finely crafted, sexy sedan that brings a great deal of style, performance and technology to the table.

With a starting MSRP of $35,845 that runs close to $46,210 for the upper-range SEL Premium R-Line with 4MOTION, the Arteon isn’t by any means cheap. It’s pricier than the Nissan Maxima, Toyota Avalon and all but the most expensive Kia Stinger trim. The Arteon’s value is solid, but there are attractive alternatives.

While I’m not crazy about its interior design, and I wonder what sort of future a large sedan has in an American market that’s madly in love with SUVs, I think the Arteon has plenty of appeal and its liftback design gives it a fighting chance to find a sales foothold.

It should at least clear the very low bar set by the CC and that would have to be considered a win for Volkswagen.

Discuss this story on our Volkswagen Forum