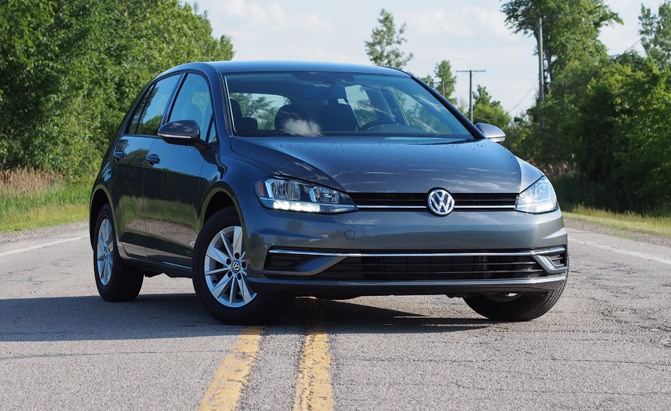 Is there one vehicle that does it all?

If you want incredible fuel efficiency, get a Toyota Prius. They deliver that in spades. Need to haul huge amounts of cargo? If so, a Ford Transit van is tough to beat. A smooth, quiet ride is something the Mercedes-Benz S-Class is famed for. Want engaging dynamics? That’s what Mazda’s MX-5 Miata has always provided. If sophisticated design is high on your list of automotive priorities the Volvo S90 has that on lock. Do you need a new vehicle and will only pay the lowest price possible? Consider an entry-level Nissan Versa.

Nearly all cars, trucks and crossovers excel in one area or another, but very few vehicles do it all. The Volkswagen Golf is a rare Jack-of-all-trades, offering impressive efficiency, cavernous interior space, a smooth ride, respectable dynamics and restrained styling all at a price that won’t make you keel over the first time you look at the window sticker.

The German automotive industry is famed for building high-performance vehicles loaded with the latest technology and features, models like the BMW M3, Porsche 911 and Audi A8. But when it comes to practicality and affordability, Volkswagen’s Golf may be this nation’s best all-around vehicular offering.

The humble hatch has been wowing motorists since it debuted in the mid-1970s. And the latest, seventh-generation model continues to impress.

Some may deride the Golf, calling it boring compared to its more expressively designed rivals. No, it’s not the most visually exciting thing on four wheels, but it is handsome, restrained and mature. When you get up close, there’s surprising sophistication to its design, little touches that aren’t immediately obvious, plus the build quality is superb with panel gaps practically as thin as a machinist’s scale. Thanks to its timeless elegance this is also a car that will age very well. How attractive will a Honda Civic or Toyota Corolla hatchback be in two or three decades?

Naturally, SE models can be upgraded with more features, though they include standard 16-inch wheels. The available driver-assistance package brings amenities like adaptive cruise control, lane-keeping assist and automatic high beams to the table. This options-group also gets you fancier wheels spanning 17 inches.

Matching its honest exterior design is a similarly straightforward cabin. Build quality is superb. Upper portions of the Golf’s dashboard are constructed of richly grained soft plastic, a material that wouldn’t look out of place in a luxury car. Glance a bit lower, however, and you’ll soon find the requisite hard polymers that are a staple of this vehicle class. No, nothing in this VW is flagrantly chintzy, but there are some low-rent materials here and there, an unavoidable fact of life.

Adding a bit of visual pizzazz and likely making it easier to access secondary controls, the center stack is slightly angled toward the driver. Three chunky, manual climate-control knobs punctuate the lower portion of this panel and are dead-simple to operate, a refreshing change from other cars where designers seem to have felt the need to reinvent the wheel.

If you’re even mildly OCD I apologize for pointing this detail out, but the radio’s power/volume knob graphic turns as you adjust it, meaning it’s almost NEVER going to be properly aligned. This small detail seems like a rare miss for VW. What has been seen cannot be unseen!

Another downside to the Golf is its gritty, cut-rate digital screen in the meter cluster. Displaying trip information, fuel economy and outside temperature, among other things, its low-resolution graphics literally looks 20 years out of date.

Our Golf S tester was also fitted with a traditional ignition, not push-button start. Hardly a deal-breaker, this, too, seems a bit out of place in 2019. The old-school twist key is an interesting throwback, though it’s not quite outdated enough to be retro-cool.

The front bucket seats are flat and broad, clearly cut for larger folks than me. The conspicuous lack of support and bolstering makes them a bit uncomfortable, though more normal-sized humans may not have an issue with them.

The Golf’s back bench is quite spacious, with ample head- and knee-room. As for cargo capacity, this MKVII model rides atop the Volkswagen Group’s ubiquitous MQB architecture, a solid and versatile platform that underpins a vast array of vehicles in this German automaker’s global portfolio, from the Audi A3, Q2 and TT to an array of Škodas and SEATs to even the three-row VW Atlas crossover. MQB works just as well in this more modest application, providing plenty of rigidity and safety along with 16.5 cubic feet (467 liters) of luggage space in the trunk. Remove the parcel shelf and that figure increase to 22.8 (646 liters); fold the backseats flat and you get just shy of 53 cubes (1,492 liters).

Whether you get a base S model or the more upscale SE version, just one engine is offered in the Golf, a 1.4-liter turbo-four. Internally referred to as the EA211, this engine features direct fuel injection, a 10-to-1 compression ratio, variable valve timing on both the intake and exhaust sides, plus an air-to-water heat exchanger in lieu of a more traditional intercooler. This component is cleverly integrated into the intake manifold for efficient packaging.

All this technology results in a modest 147 horsepower and a more impressive 184 pound-feet of torque, all while running on regular-grade, 87-octane gasoline. These output figures are comparable to what you get in hatchback versions of the Honda Civic and Toyota Corolla.

Transmitting torque to the front wheels is your choice of transmission. The Golf can be equipped with either a standard six-speed manual gearbox or an available eight-speed automatic.

The Golf is not particularly engaging or entertaining, in fact, at times it can feel quite sedate, but it’s good enough for the intended purpose. Driving fun is the purview of Volkswagne’s spicy GTI, which is much quicker and more direct in every way, as it should be, since it’s a “hot hatch.”

Acceleration is not particularly brisk, but the Golf is more than up to the task of safely merging onto the highway or passing slower-moving vehicles without causing the driver to scrunch up his or her face in anticipation as they try to outrun oncoming traffic.

Just like its bigger relative, VW’s EA888 2.0-liter turbo-four, the Golf’s engine is plenty smooth, and quite peppy, particularly at low speeds where its prodigious torque gives this car admirable squirt. Making the most of that twist, which peaks at an impressively low 1,400 rpm, the eight-speed automatic gearbox shifts quickly and smoothly.

The Golf’s powertrain is plenty likable, but a couple of its other dynamic elements leave something to be desired. The car’s steering is light to the touch and disappointingly vague. Worse than that, the brakes are incredibly squishy and the pedal itself is mounted a bit too high relative to the accelerator, which makes it difficult to transition from one to the other without craning your ankle or picking your foot up entirely.

While not as fun to drive as perhaps it should be, the Volkswagen Golf is still an excellent hatchback and an all-around versatile vehicle. It’s a great antidote to the ongoing crossover pandemic sweeping the world.

This car’s spacious and mostly premium interior, smooth powertrain and value pricing make it a great buy as well. The base price for an unadulterated Golf is $22,740 (CDN $24,145), including $895 in destination charges. The automatic-equipped S variant tested here checked out for less than 24 grand (CDN $25,545), including an $1,100 upcharge for the eight-speed transmission.

If you’re in the market for a versatile and efficient vehicle and you don’t get your jollies from driving, consider parking a Volkswagen Golf in your garage. It’s a small car that very nearly does it all.

Discuss this story on our Volkswagen Forum