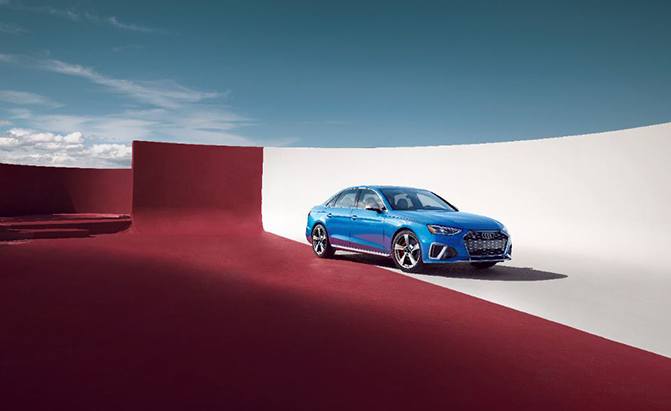 Are you one of the people that bemoan how expensive modern cars are becoming? Audi’s refreshed A4 might be just what you need, then.

The Ingolstadt-based automaker announced the pricing of its mainline compact sedan today, and it actually undercuts 2019 models in most cases. Despite that, the freshened A4 arriving on dealer lots will contain more standard content.

It starts with an upgraded version of Audi’s infotainment system, dubbed MIB 3. It offers up to 10 times the operating power as the previous system, making for quicker response times and higher resolutions. Drivers and passengers will still interact with the system via MMI, plus a 10.1-inch touchscreen. A larger 12.3-inch screen is still available as part of the Virtual Cockpit too, replacing analog dials with a full screen. Both Apple CarPlay and Android Auto are standard. Audi includes a heated driver seat in base models as well.

Audi Pre Sense Basic and City are both standard. Basic will close windows and pre-tension the seatbelts if it senses an impending colliesion. City is a warning system using a front-facing camera. Other safety features such as blind spot assist and cross traffic alert are available as part of the legendarily lengthy options list. So to are other niceties like a full-color heads-up display and 19-speaker Bang & Olufsen sound system.

SEE ALSO: Audi A3 vs A4: Which Luxury Sedan is Right For You?

Outside the A4 adopts full LED lighting front and rear, with mildly massaged metal all around.The headlights take on a simpler shape, removing the nostrils of the 2019 model. Meanwhile the rear now looks more A6, less Jetta. New shoulder creases give the car more presence in profile, while the front bumper adopts larger lower air intakes and a wider shield grille.

The starting price for the 2020 A4 is $38,395 in 40 TFSI Premium form, down from $40,195 for a 2019 40 TFSI Titanium. The 40 continues to use a 2.0-liter turbo, pushing 188 hp and 236 lb-ft through the front wheels alone. Graduating to the 45 TFSI quattro powers up the powerplant, boosting figures to 248 hp and 273 lb-ft. It enjoys an even bigger discount over last year’s model, with its $41,895 starting price slashing $1100 from the 2019 sticker. Quattro models also receive the S line exterior package as standard. Both drivetrains funnel their power through a seven-speed automatic. All prices include a $995 destination charge.

Premium Plus trims are similarly cheaper than 2019 models, while the top-shelf Prestige does in fact ring up as more than before.

The refresh should keep the A4 fighting fit against the Mercedes C-Class and BMW 3 Series. Expect to see it on dealer lots in the very near future.