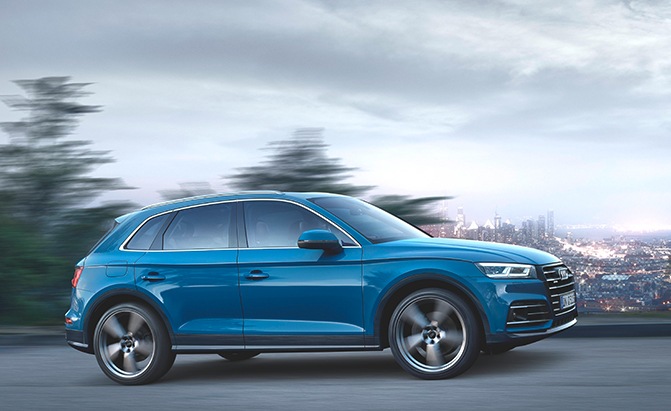 The Audi Q5 is joining the increasing ranks of plug-in hybrids for 2020.

Fresh off the refresh of its A4 sedan sibling, the Q5 is getting its own set of updates. Audi’s best-selling crossover is getting a plug-in hybrid version this year, offering better fuel efficiency in addition to improved performance.

First, efficiency. The Q5 TFSI e, to give it its official name, comes with the four-ringed brand’s familiar 2.0-liter turbo four-cylinder. An electric motor slots in between it and the seven-speed dual-clutch transmission, with the motor drawing power from a 14.1 kWh lithium-ion battery. Running solely on electric power the Q5 TFSI e can hit up to 20 miles before needing to start drinking gas. All told, buyers can expect to hit an EPA-certified 65 mpg equivalent.

On to performance, then. With both the battery and four-pot engaged, combined output sits at 362 hp and 369 lb-ft of twist. That’s comparable to the high-performance SQ5, with more ponies and an identical torque figure. Mash the throttle and the 0-60 mph sprint in five seconds flat—making it the quicker of the two, if only by a tenth. Naturally the TFSI e comes with standard quattro all-wheel drive.

All this performance and parsimony add up: the Q5 TSFI e starts at $53,895 including $995 in destination. The SQ5 comparisons continue here too, since that’s the exact same starting price. The plug-in hybrid tops out at $61,345, $300 less, but Audi predicts customers will be able to get up to $6,712 back in federal tax credits. That bumps the effective MSRP down to as low as $47,183.

On paper, the Q5 plug-in overpowers its Bavarian competition, the BMW X3 xDrive30e. Both vehicles target the same 20 mile all-electric range, and both use a combo of 2.0-liter turbo, battery, and all-wheel drive. BMW has yet to release pricing for the X3 however, which arrives later this year.