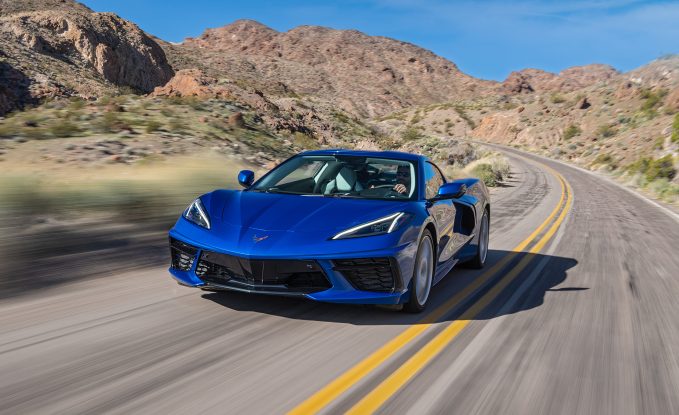 I well remember being in a massive throng of car journalists on media preview day at the Detroit Auto Show in January 2013 for the reveal of the seventh generation (C7) Chevrolet Corvette Stingray. A next-generation reveal for an icon like the ‘Vette is a big deal, and it was the talk of the show. At any rate, in the aftermath of the unveil I remember hearing and reading a lot about the dramatic (!) switch to rectangular taillights and a front grille and headlight array that looked like it had drawn a bit too much inspiration from Ferrari. The audacity! Having returned from Las Vegas where I sampled the all-new eighth-generation (C8) Corvette Stingray, a car that introduces changes that makes handwringing over square taillights and Ferrari-ish grilles seem quaint, I’m struck by how much the general consensus around this car has evolved. Just about everything I’ve heard is positive.

The general impression is that it was time for the Corvette to change. There’s a lot to unpack here, so let’s start with the most obvious: the layout.

This is the above-the-fold news. After seven generations with a front-engine layout, the Corvette has finally joined the ranks of the world’s other great sports cars with an engine located behind the passenger compartment. While this is new for the production car, General Motors has been building mid-engine Corvette concepts for decades. The first dating back to the original Chevrolet Experimental Research Vehicle (CERV) which debuted in 1960. The CERV-I was the brainchild of Zora Arkus-Duntov, the Corvette’s first chief engineer. Like those that would follow in 1964 (CERV-II) and 1990 (CERV-III), the CERV-I was a mid-engine, V8-powered car with a lightweight aluminum structure. Duntov was an ardent believer that mid-engine was the ideal choice for the Corvette in terms of weight distribution, handling and forward visibility.

However, due to concerns over practical issues,  such as limited passenger and cargo space, loudness and engine cooling problems, GM executives chose not to greenlight it for production. These issues would, however, be ironed out over time thanks to advances in technology.

The V8 You Know But With More Power

Powering the C8 is a new variant of GM’s 6.2-litre small-block V8, known as the LT2. Changes include, for the first time on Corvette, a standard engine-mounted dry sump oil lubrication system with three scavenge pumps that can withstand up to 1.25g of sustained lateral acceleration on track.

The LT2 also features a low-profile oil pan that reduces mass and a larger (25 percent) capacity oil cooler. The crankshaft now sits one inch lower to the ground (measured from the centerline) where it’s paired with the transaxle. It is designed to improve handling.

Since the engine is visible through a 3.2-mm-thick glass panel, the appearance of LT2’s components received attention as well. This includes everything from wires, tubes and routing fasteners to coolant hoses, exhaust manifold and standard red valve covers.

During the slide presentation in Vegas, GM referred to the Corvette’s structure as a ‘mosaic of materials’, which includes aluminum, magnesium, fiberglass and carbon fiber for reduced weight and greater torsional stiffness.

The main structure consists of six high-pressure die-cast aluminum pieces. GM engineers wanted fewer joints for a stiffer structure, primarily for improved handling and cornering on track. Elsewhere, the rear bumper beam is carbon fiber for reduced weight. Also, GM makes the front and rear trunk tubs and dashboard from a combination of fiberglass and a proprietary resin. They selected it for its weight-saving properties and its ability to reduce noise and vibration. GM says it’ll even float on water.

It all adds up to a car with a 40:60 front / rear weight distribution as opposed to the C7’s 50:50 ratio. GM says more weight on the rear axle helps improve overall handling.

On the suspension front, the C8 has a coil-over damper layout and an updated electronic steering system with an improved ratio (15.7:1 versus 16.25:1). Michelin Pilot Sport 4S summer tires are standard. It also gets a front suspension lift designed to save bodywork from damage by potholes, speed humps, and other road obstacles. It increases the ground clearance by 40 mm in 2.8 seconds at speeds up to 24 mph. You can also program it to work with the car’s GPS to remember up to 1,000 locations.

Other enhancements include an electronic limited-slip differential. It is integrated into the transaxle for modulating left to right torque split for better stability. A front splitter and an open two-piece spoiler adds 400 pounds of downforce, for improved grip and cornering. GM’s Magnetic Ride Control 4.0 is also a part of the C8 package with suspension-mounted accelerometers for more precise data collection and faster-responding electronics.

The optional Z51 which I sampled in Vegas, includes performance suspension with manually adjustable seats. It also features larger brake rotors with Z51 logo on the calipers and front brake cooling outlets. The package also boasts of a performance exhaust, among other features.

When you change a car’s layout, the attendant redesign can be dramatic and that’s the case with the C8.

The proportions of the new car remind me less of Corvettes of old but more of other mid-engine sports cars, like the Acura NSX and Audi R8. Simply put, if I merely caught a glance of the C8 from a distance, I’m not sure if I’d know it was a Corvette right away.

This isn’t a bad thing because it’s a byproduct of a layout change that delivers better handling and performance. And frankly, we’ve had nothing but front-engine Corvette design since 1953. It was time for a change. If it takes time for some to adjust, so be it.

Designers on the C8 team drew inspiration from large-canopied F22 and F35 fighter jets and Formula One race cars. They sought to convey a purposeful look that says performance. With its short hood, aggressive fenders, large side air intakes and new, low-profile headlights, the C8 looks like what it is: a very fast car.

There’s a real sleek, windswept look to the C8 that photos don’t really capture. Nor do they fully account for just how exotic its appearance has become. Even along the distraction-filled Las Vegas strip, there were plenty of onlookers reaching for their phones as we headed out on our drive route. To me, that’s an indicator of great design.

The switch to mid-engine has had a significant impact on driver positioning and center of gravity. The entire cockpit has moved forward by 16.5 inches, and it envelops the driver in a way the C7 did not.

Among the highlights are two large digital screens: a 12-inch configurable instrument cluster unit and an 8-inch infotainment display. The latter is angled sharply towards the driver. The center console houses the push-button gear selector, driving mode select knob, two cup holders, and a small storage bin. The two standouts for me are the square steering wheel and the curved vertical dash extension that arranges climate control buttons in a long strip from infotainment screen to armrest.

First, the wheel is designed to improve visibility both within the cabin and over the hood. It’s small, but it feels good and suits the C8’s aesthetic. As for the climate controls, the buttons are all hard keys with logos easy to read. And, like everything else in the cabin, are driver-focused. The design divides the cabin into separate compartments, but it works well from either side.

Lastly, seating is comfortable and very supportive, especially on the track. But I found the side bolstering to be aggressive in all pre-production units I drove in Vegas. The bottom line, the slimmer you are, the less they will bother you.

Pleasing On The Road, All Business On The Track

The C8 is a fast car, but you probably already knew that. What you may not have known is just how comfortable it is in everyday driving conditions. The C8 is loud under acceleration, but power delivery from the LT2 V8 is linear and not neck-snapping. It’s fast, but in a smooth and progressive way. Wind and road noises are generally well insulated, and while it isn’t tomb-like, the cabin is conducive to conversation.

The C8 is available with an 8-speed dual-clutch automatic only with steering-wheel-mounted paddle shifters, and I found it to be smooth and precise. The paddle shifters operate with a precision that is quite impressive. I find GM’s claim of ‘lightning fast’ to be accurate.

Other things that stuck out in my mind on the road are the C8’s improved forward visibility and crisp handling. Forward visibility is not a traditional Corvette strong suit, but the shorter, sloping hood is appreciated from a performance driving standpoint. As for on-road handling, the C8 feels stable, responsive and well-balanced. The ride is stiff, but four drive modes (weather, tour, sport, and track) enable the driver to adjust the car’s character as desired.

During my time in Vegas, I spent a day at Spring Mountain Motorsports Ranch. It is home to a 2.2-mile road circuit located in Pahrump, Nevada, about an hour northwest of Las Vegas. The seat time – two sessions that ran for about a dozen laps each – was quite generous. I came away from the experience impressed with the C8’s overall track prowess.

With the drive mode selector set to track, the C8’s reflexes are at their sharpest which made for some very enjoyable laps. Throttle response was hair-trigger, enabling the car to zip past 100 mph in very short order. Then gathering it back up and pointing it at Spring Mountain’s many and varied corner apexes proved to be both fun and satisfying.

I came in hot on a few corners and accelerated quickly out of others to see if I could get the rear end to move around. And it did – it’s still a rear-wheel-drive car, after all. That was my experience, I concede yours may vary. That said, the C8 generally rotates well through corners, particularly in the tight stuff, with a minimal amount of understeer.

The C8 Corvette represents a massive departure from what the American sports car has been for over 65 years. It looks, feels and drives much differently from every previous Corvette. GM may have been reluctant to move on from the classic front-engine Corvette a few decades ago with good reason. But they’ve now recognized the car must change and are fully embracing it. And I think it will be a success.

In writing this review, I was hard-pressed to come up with things about the C8 I didn’t like because there weren’t many. The things I’ve listed below are fair I think, and I’m genuinely curious about what the C8 would be like with a three-pedal setup, but honestly, I think it’s very good as is. I’d happily drive one every day with no changes.

It took decades, but the mid-engine Corvette is finally here. Somewhere in the great beyond Zora Arkus-Duntov is surely smiling.