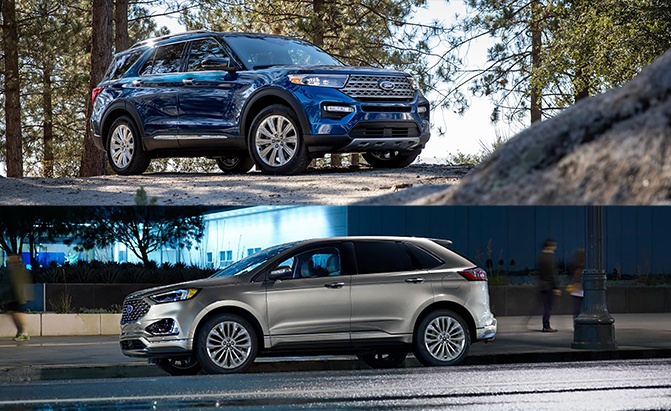 It can be argued with some vehemence that the Ford Motor Company is responsible for the plethora of crossovers and SUVs plying our nation’s roads.

When the Blue Oval introduced its then-new Explorer for the 1990 model year, it introduced a vehicle that offered 4×4 grip wrapped up in a spacious yet easy-to-park package. At the time, dealers were reporting that a significant percentage of Explorer customers were trading in cars and—this is key—often a sporty model.

The rest, as they say, is history. Well over 50% of new vehicles sold last year were classified as a something other than a car. It’s gotten to the point where more than one automaker has abandoned the sedan market altogether in an effort to focus their attention on SUVs which sell more quickly and enjoy fatter profits.

Which companies? Ironically, Ford is one of them. The company which arguably turned American drivers on to crossovers and SUVs is about to exit the sedan market altogether. That’s a full circle if we’ve ever heard one.

The two machines compared here occupy the mid-to-upper end of Ford’s current roster of SUVs, both in terms of size and price. Is the one that started it all, the Explorer, part of the mix? Yewbetcha. Let’s check them out.

Edge: For 2020, all Edges save for the sporty ST are powered by a turbocharged four-banger making 250 hp and 275 lb-ft of torque. Front-wheel drive is standard on non-STs, with all-wheel drive showing up as an option. The speedy ST has all-wheel drive as standard and earns a 2.7-liter turbocharged V6, good for 335 ponies and 380 units of twist. Every Edge built for 2020 gets an eight-speed automatic transmission.

Explorer: Ford isn’t shy about offering a wide range of propulsion in the 2020 Explorer. Its first three trims install a 2.3-liter turbocharged four making 300 horses and 310 lb-ft of torque. Hybrid models bring a combined 318 ponies and roughly like amount of torque from a 3.3-liter gas-powered engine and electron hoovering hybrid power team. Both the ST and Platinum get a 3.0-liter Ecoboost V6, with the former tuned to 400 hp and the latter making 365. ST models make plenty of grunt, too, with 415 lbft on tap, 35 more than the Platinum.

Bottom Line: Your author once owned a 2009 Ford Edge, a machine which produced 265hp from its 3.5L V6 engine. Given this knowledge, he is hesitant to recommend a four-banger Edge making less power. Likewise, an Explorer with four pistons seems wrong until one realizes it has three stacks of ponies. Gearheads should check out the Explorer ST if it’s in budget.

Edge: Every two-row Edge is #blessed with Ford Co-Pilot360, a network of cameras and sensors which can warn of impending doom and attempt to keep drivers from center-punching that deer. Evasive steering assist is available on SEL and standard on the top two trims; it’s the same story with adaptive cruise control which features stop-and-go and lane centering.

Explorer: Dearborn has been making plenty of noise about its new Co-Pilot360 suite of safety nannies, a group of tech which includes lane keeping, automatic emergency braking, and forward collision warnings. There’s even a lens washer on the backup cam, an idea whose time is far overdue. Adaptive cruise control is optional on some models, as are active parking assists and voice-activated touchscreen navigation.

Bottom Line: Ford’s done a good job of infusing most vehicles in its lineup with a raft of safety equipment under the CoPilot360 banner. Both the Edge and Explorer have these features in spades. The latter’s top-rung infotainment touchscreen could stand to be better integrated into the dashboard but there’s no denying its resolution and graphics.

Edge: Ford reckons front-wheel drive versions of this trucklet should return 21 mpg around town and 29 mpg on the highway. Combined, expect to see somewhere in the neighborhood of 24mpg. Adding all-wheel drive dings each of these numbers by a single mpg, save for the city rating which remains the same. It should be noted that the power numbers listed at the beginning of this post are achieved with expensive 93 octane fuel. Oddly, all-wheel versions of the Edge have a slightly larger fuel tank despite the presence of more powertrain gear.

Explorer: Rear-drive hybrids are the mileage champ of the Explorer family, rated at 27 mpg city and 29 mpg highway. Adding all-wheel drive brings this down to 23/26. That turbo four is allegedly good for 21mpg in town and 28mpg on the open road, with AWD removing a single mpg from those numbers. At 18/24, 3.0-liter equipped Explorers will struggle to reach 20mpg in combined city and highway driving conditions ST and Limited atone for their thirstier habits by packing a 20.2 gallon fuel tank compared to a roughly 18 gallon vessel in other trims. All Explorers run just fine and make their advertised on regular fuel.

Edge: This nameplate has been around for over ten years now and, throughout that tenure, has always tended to look like a rounded-off dinner roll. Model year 2020 is no different, with Edge continuing to be one of the best-looking vehicles in its segment. Snazzy ST version earn special trim and bodywork to let the other parents know you’re wearing Piloti shoes while dropping the kids off at soccer.

Explorer: Ford completely overhauled the Explorer for this year, to the point where virtually no body panels are shared with the outgoing model. Despite this, the casual observer (ie. just about everyone) would be hard pressed to tell the difference between the two unless they were parked side-by-each. Different trimmings distinguish Explorer’s trim range from base models up through Hybrid and ST models to the top-spec Platinum.

Bottom Line: Some folks think buying the same or similar car twice is a wasted opportunity (*raises hand*), so Ford may have a challenge on its hands to demonstrate its 2020 Explorer is actually completely different from the old one.

Edge: Absent a third row, Edge can seat five people. Front row chairs offer 42.6 inches of legroom and 40.2 inches of headroom. Adding a sunroof shaves a shocking 2.5 inches from that latter figure, so make sure to try before you buy. In a twist, headroom actually increases by a couple of tenths in the second row while offering 40.6 inches of space for legs. Total passenger volume is 113.9 cubic feet.

Explorer: This is Ford’s three-row seven (or six, if equipped with second-row bucket seats) bus, one which provides 40.7 inches of headroom up front along with an even 43.0 inches of legroom. Second-row riders will find about the same amount of headroom though space for legs shrinks to 39.0 inches. In the third-row Way Back, a tapering roofline cuts headroom to 38.9 inches and, as you’d expect, legroom falls significantly to 32.2 inches. Total passenger volume is 152.7 cubic feet.

Bottom Line: If you don’t absolutely need a third row, pop for the Edge. It bests Explorer in a couple of second-row measures thanks to the bigger truck’s need to squeeze an extra seat into what’s usually the cargo area.

Edge: Not having to house a third row of passengers works to Edge’s advantage, as a generous 39.2 cubic feet of space exists for cargo behind the second-row bench. Flipping that seat flat opens up a cavernous 73.4 cubic feet of room. Liftover height, the vertical measure from the ground to a car’s cargo floor, is about thirty inches.

Explorer: With all rows of seats deployed, Explorer can cart around just 18.2 cubic feet of stuff. Getting that third row out of the way opens up 47.9 cubes, revealing the main reason this company invented the Explorer in the first place. Turning this rig into a two-passenger machine creates 87.8 cubic feet of cargo space.

Edge: In the US, Edge starts at $31,100 for an entry-level SE model that no one buys. Volume-leader SEL trim is $34,355 while that hi-po ST you really want is a heady $43,265. Adding all-wheel drive tack $1995 to the bill and there are plenty of convenience packages to pad the total as well. In a fit of corporate responsibility, Ford doesn’t limit the high-tech safety kit like adaptive cruise control with stop-and-go braking to just top models; it is available as a stand-alone option for $795.

Explorer: Sitting slightly farther up the food chain than Edge, the rear-drive Explorer sets an opening bid of $36,675 in XLT trim. Adding 4×4 is a $2000 proposition. Lux-grade Limited models, which are limited to exactly the number Ford thinks they can sell, cost $48,130. ST trimmed trucks sticker near 55 grand, while top dog Platinum models start at $58,250 and can easily blow past sixty large with a few options.

Bottom Line: Edge sells by the boatload for a reason and, in many cases, that reason is price. Sub-$35k stickers for well-equipped models are quite attractive to most families. The new Explorer is priced like a Lincoln, which itself is priced into the stratosphere.

Before signing your name and driving away, be sure to test both of these rigs thoroughly to make sure you’re buying what your family needs. Even if it’s just you and the dog, examine models with and without different features (*ahem* sunroof *ahem*) to be certain of an ownership that meets your expectations.

And, as always, get the most powerful engine if it is in budget.