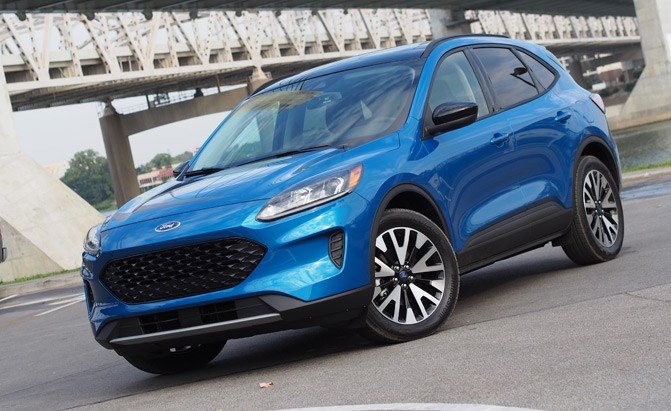 The 2020 Ford Escape is brand new and that’s a huge deal.

What’s so important about this fairly innocuous small crossover? It’s certainly not the most innovative, emotional or groundbreaking vehicle ever built. No, it’s arguably something far more important: popular.

Escape is the blue oval’s second-best selling nameplate after the vaunted F-Series pickup family. Vast herds of this utility vehicle populate highways and strip-mall parking lots across North America, just like bison on the Great Plains before they were hunted to near-extinction. If Ford didn’t bring its A-game with this latest Escape the competition would happily help themselves to Dearborn’s generous slice of the market.

Prettier Than a Picture

I’ll be honest, when the latest Escape was unveiled to unexpected fanfare earlier this year, I was like, “THAT’S what it looks like?!” In photos and video, it’s about as exciting as a mayonnaise sandwich.

Fortunately, my initial impression was wrong. This vehicle is far more attractive in person, with clean, somewhat rounded bodywork and a nicer-than-expected cabin.

The 2020 Ford Escape is lower, wider and longer than the outgoing model, though it’s still perfectly sized to compete with other small crossovers like the Toyota RAV4, Honda CR-V and Chevrolet Equinox. They’re all within an inch or two of each other in every major measurement.

Thanks to that modest size increase this vehicle offers customers more – more head-, shoulder- and hip-room in both rows of seats.

But for customers that want it all, amenities like Active Park Assist 2.0, adaptive cruise control with stop-and-go capability and lane centering are also available.

Under the hood there’s plenty of choice. Two conventional powertrains are on the menu along with two hybrid versions. The base engine is a 1.5-liter turbocharged three-pot unit with cylinder deactivation. It delivers 181 horsepower with 190 pound-feet of torque.

The optional gasoline engine is a larger 2.0-liter EcoBoost four-cylinder. Running on premium fuel (91 octane or higher) it puts out 250 horses with 280 pound-feet of twist. Both these powerplants are matched to an 8-speed automatic transmission. Naturally, front- or all-wheel drive is offered.

Beyond that, two fuel-saving powertrains will be available, an Escape Hybrid and an even more advanced Plug-In Hybrid. Both feature a 2.5-liter Atkinson-cycle four-cylinder engine and an electronically controlled continuously variable transmission.

The plug-in hybrid Escape should provide an electric-only driving range of about 30 miles. As for charge times, it takes between 10 and 11 hours to fully juice one of these vehicles when hooked to a standard, 110-volt household power outlet. Take advantage of a Level 2 charger that operates at 240 volts and that time drops to a mere 3.5 hours.

Regrettably, no fuel-economy figures have been released for gasoline-electric versions of the Escape. They’re still being finalized by the U.S. EPA, however, an engineer let slip the hybrid model should average more than 40 miles per gallon, a damn-impressive figure for a vehicle this comfortable and capacious. For reference, the RAV4 Hybrid, a major competitor, is rated at 40 mpg combined.

as for the conventionally powered models, a front-drive version with the 1.5-liter engine should return 27 miles per gallon city, 33 highway and 30 mpg combined. Grab one with all-wheel drive and those figures drop slightly to 26, 31 and 28, respectively. An all-wheel-drive version with the larger 2.0-liter powerplant should return 23 miles per gallon around town, 31 on the open road and 26 combined.

The extensive use of high-strength steel helped this vehicle lose more than 200 pounds, which, of course, should work like magic to improve efficiency across the range. It also helped make the A-pillars a trimmer for slightly improved forward visibility.

The 2020 Ford Escape’s interior is cleanly styled. All the controls are easy to reach and simple to operate, which is refreshing because so many modern vehicles are overloaded with borderline-incomprehensible electronics.

Up front, the bucket seats are supportive and comfortable. ‘Round back there’s ample room for knees and noggins. The Escape’s second-row bench both slides and reclines, plus it offers loads of space, as does the cargo area. This vehicle can accommodate six golf bags or more WITHOUT folding the rear backrests down. Drop them and you get as much as 65.4 cubic feet (1,852 liters) of space, more than some rivals offer, but a little less than CR-V, which tops out at nearly 76 cubes (2,146 liters).

As for overall interior quality, the Escape’s cabin is mostly nice, with soft plastics comprising much of the dashboard as well as the front door panels. Of course, there’s hard stuff in plenty of other places and some of the trim, even in top-shelf Titanium models, is a little lower rent than perhaps it should be, but for the most part it’s a pleasant place.

Settle into this Ford’s cushy driver’s seat, fire it up, twist the rotary shifter into “D” and you’re rewarded by a mostly refined and engaging drive.

The 2020 Escape’s top engine offering is unexpectedly responsive, hitting its stride at low rpm and pushing this crossover to 60 miles an hour in as little as 6.5 seconds. It’s also a paragon of smoothness; minimal vibration makes its way into the passenger compartment.

As for the smaller 1.5-liter engine, it definitely feels like the entry-level offering, disappointingly choppy at idle. Fortunately, it smooths out as revs build, hauling the new Escape around without breaking a sweat. Really, it’s all most drivers need. Oddly, it also sounds a bit like a small-displacement V6.

What about that 8-speed transmission? Well, it’s mostly on point. I experienced a couple clunky shifts during my extended drive, but for the most part it’s dialed in, better than the infamous ZF 9-ratio automatic used by numerous other automakers.

Unexpectedly, the hybrid offering may be the best drivetrain available in this vehicle. It’s smooth and quiet, plus the performance it delivers is more than adequate. It’s hard to say with certainty, but it could provider even quicker acceleration than the base engine. On top of all that, it’s going to deliver exceptional fuel economy. If the upcharge isn’t too onerous for you, it’s an excellent choice.

Sensible and spacious, the new 2020 Ford Escape should be a compelling option in the compact-crossover segment. Giving customers plenty of choice, it will be offered in five trim levels: S, SE, SE Sport, SEL and Titanium. The hybrid model should be available in SE Sport and Titanium variants, the plug-in as SE, SEL and Titanium trims.

As for pricing, a base front-wheel-drive Escape should start at $26,080, including $1,195 in delivery fees. The hybrid kicks off at about 30 grand. These prices are very comparable to rival crossovers.

Look for the 2020 Ford Escape at dealerships in just a couple weeks, though the plug-in hybrid won’t go on sale until next spring.

Discuss this story on our Ford Forum