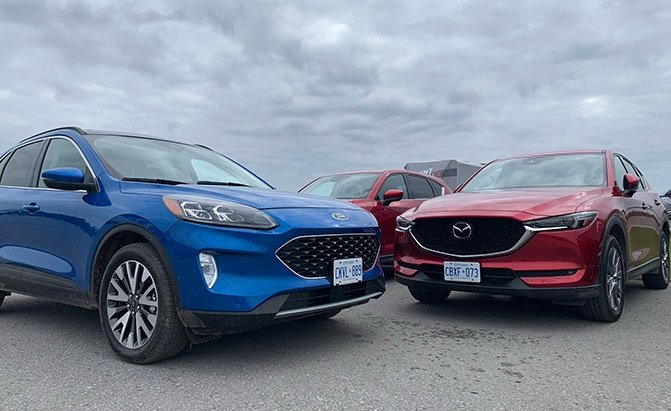 The small crossover segment, a murderously competitive market in which there is a phalanx of players, is plenty crowded. In fact, trying to choose the best one is like trying to pick your favorite trumpeter out of a large brass band. With everyone making so much noise, it’s tough to focus on a single player.

But attempt we must, which is why we rounded up two entrants into the segment – one which recently got the vehicular equivalent of a nip and tuck job while the other went under the knife and came out looking like a completely different person (car). The Mazda CX-5 and Ford Escape, respectively, represent a good cross-section of what most mainstream customers are looking for in a new family whip.

Despite frequent protestations to the contrary, one of the main reasons for buying a mainstream crossover is to carry the daily detritus of family life. On paper, these two machines are fairly evenly matched but practically, there are noticeable differences. There is less intrusion of the rear wheels in the cargo area of Ford’s new Escape, meaning that the Blue Oval’s space behind the rear seat is more practically shaped than the Mazda. This could mean the difference between fitting all the hockey gear and having to toss some of it in the back seat. If one is looking at raw numbers, the Escape’s 33.5 cubic feet of space outstrips the Mazda by about three cubes.

Comparing the two, room for humans is roughly equal. The dimension sheet reveals the Escape has about an inch more headroom than the Mazda but your 6’6” author fit just fine in both vehicles. Drivers who are long of beam (*raises hand*) will likely find the Ford to be slightly more comfortable given the shape and length of the driver’s perch, whose seat cushion is more supportive.

Think of it this way: the Ford feels more like a comfortable pair of denim jeans while the Mazda is more like a casual pair of chinos. The latter is slightly more upright and less comfortable than the former … but only just.

There are three different engines available in the Mazda CX-5, including an entry-level four-banger and a spendy turbocharged diesel. Our test vehicle was fitted with the excellent 2.5L four-cylinder turbo, making a healthy 250 horsepower and 310lb.-ft of torque when fed a steady diet of 93 octane fuel. Acceleration is brisk, proving the old saw that most customers shop for horsepower but actually end up buying torque. The all-wheel-drive powertrain shuttles power to the Mazda’s four corners by way of a six-speed automatic.

The Ford can be had with either a miserable 1.5L EcoBoost three-cylinder engine that wheezes out just 180 horsepower or the 2.0L EcoBoost found in our test rig. The latter makes an equal-to-Mazda 250 ponies but, thanks to giving up half a liter of displacement, only 275lb.-ft of torque. The Ford is still plenty responsive to the prods of one’s right foot and, in a vacuum, would seem to be plenty powerful. However, when driven back-to-back with the brawny Mazda, it is clear that the Hero from Hiroshima has better seat-of-the-pants acceleration properties than the Dude from Dearborn.

A decade ago, Ford staked its claim on the then-new Sync infotainment system, a level of technological kit heretofore unseen in many mainstream vehicles. Time marches on, as it tends to do, so Ford has since gone back to the drawing board and given their roster of tech a bit of a rethink. The gauge set ahead of the driver actually isn’t a gauge set at all, swapping needles and dials for a large digital screen in the vein of Audi’s Virtual Cockpit. A raft of display options permit a wide variety of information to be presented, including a too-logical Calm Mode in which only vehicle speed and fuel level are shown. In a world where one is constantly bombarded with dings, rings, and notifications, it isn’t a stretch to say the Escape can offer an *ahem* escape from the daily grind.

Mazda has been on a quest to eradicate touchscreens from their vehicles, asserting that drivers are less distracted by a single control knob and few buttons than trying to jab at a screen whilst hurtling down the Don Valley Parkway. It takes a minute to get used to controlling the likes of Apple CarPlay with a jog/scroll wheel but the learning curve is about as flat as the CX-5’s torque curve.

Both cars are fitted with driver assistance technology such as lane-keeping and adaptive cruise control. Ford bundles these features under the very marketable name of Ford CoPilot360, giving Blue Oval sales staff a speaking point on which to fixate. This doesn’t mean the Mazda falls short of the Ford in this area – far from it – but a memorable catch-all name means most customers will likely be more aware of Ford’s offerings.

Mazda is the acknowledged master of crafting interior trappings that looks many leagues more expensive than they actually are. The cabin of our Signature-grade tester provided a clean and minimalist look with the heating and ventilation controls tucked neatly down by the gearshift and a discreet infotainment screen poking up from the dash like a subtle business card left behind by a visiting sales rep. Materials are top-notch for this price point, with soft coverings on the upper dash and snazzy black trim flanking the shifter.

Ford takes a similar tack in terms of interior layout, with heating controls living in the apartment underneath a pair of generously sized air vents topped by a large infotainment display. Since the Glass House has fully and completely embraced touchscreens, Ford’s screen is larger than the Mazda’s and positioned closer to the driver. As mentioned earlier, the total digital gauge pod ahead of the driver walks all over the elegant and clear Mazda analog gauges in terms of information available to the driver. Ford’s interior materials are not as sumptuous, however.

On paper, the Mazda splits the Ford in terms of rear-seat legroom, because the Blue Oval’s rear chairs can be slid fore-and-aft a couple of inches. This feature is immensely helpful for scooching Young Kids in car seats a bit closer to the driver or giving future NBA stars a bit more stretch-em-out room while they Instagram a new meme about stonks. Practically, though, it’s a wash between the two.

According to NRCan, the 2.5L four-banger turbo in our test CX-5 is good for a fuel economy rating of 10.2L/100km in city driving and just 8.2L/100km on a highway cycle. This reflects the boosted nature of this engine, which likes to drink fuel more heavily when the driver dips into its turbocharged sauce.

The smaller-displacement, but still turbocharged, Escape is expected to return just slightly worse economy in town than the Mazda but provide notably better efficiency on the highway. At 10.4 and 7.5L/100km respectively, the Ford is worth your attention if major bouts of commuting are in your plans. The two extra cogs in Escape’s transmission surely help as well.

Always subjective, your author will emphatically say Ford went a bit too far when rounding off the edges of this 2020 Escape, creating a machine that pays tribute to the noble lungfish. Amorphous headlights bookend a gawping grille, giving Escape the appearance of a rural simpleton who’s unsure of the art installation at which he’s looking. Things improve around back, where the silver ESCAPE billboard nicely fills in what would otherwise be blank space between the taillights.

Mazda, on the other hand, has crafted a machine that simultaneously looks elegant while also incorporating a few design cues from the company’s sports car line – past and present. Headlights are narrowed like the eyes of a suspicious school headmaster looking for smokers behind the gym, while a wide swath of chrome ties the whole front end together with an appropriate amount of flash. Subtle flares over the front wheels remind this author of the current MX-5 convertible and the RX-8 from years past. This is a good-looking car.

Mazda likes to stack its vehicle trims like cordwood, asking customers to step up to the next level should they desire more equipment rather than tack on an option group. The Mazda shown here is a high-zoot Signature model, equipped with all-wheel drive and that tasty turbo. Its base price is $40,950 to which only the snazzy Soul Red paint can be added. Including freight, this Mazda is out the door at $43,295.

The marketing mavens at Ford feel they have the bandwidth to move Escape deep into the forty grand price bracket, setting an opening bid for this all-wheel-drive Titanium model at $40,049. The addition of a Titanium Premium package, which brings a heads up display and panoramic vista roof, plus freight for this fancy Ford puts its final sticker price at an ambitious $44,299.

There’s no doubt in your author’s mind that the Mazda CX-5 remains the stylish choice in this segment. However, its stature is slowly being usurped by machines like the new Escape which brings a yaffle of neat-o technology and smarter interior packaging. Given its extra power and sharper reflexes, gearheads would be well served to sample the turbocharged CX-5 when shopping this segment. If gee-whiz technology and a slightly bigger cargo area is your bag, be sure to check out the Ford.

Maybe selecting one’s favorite trumpeter out of the brass band isn’t so difficult after all.