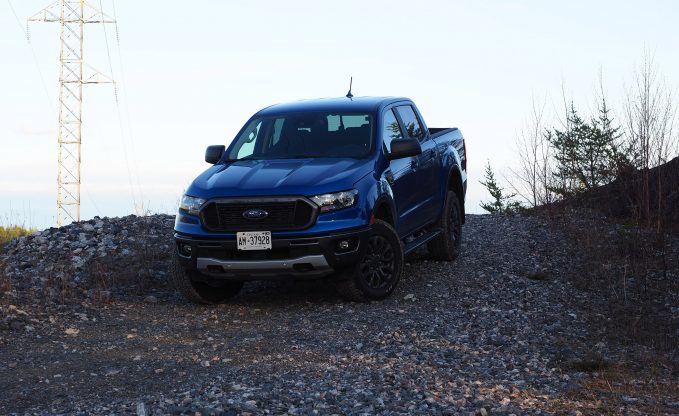 I live in the countryside, way up north. We’ve got plenty of outdoor space, plenty of lakes and cottages and trails, and plenty of roads that are in spectacularly bad shape.

For these reasons and a few others, pickup trucks are the go-to means of conveyance for many who live here. A non-scientific count might say they make up half the vehicles on the road, they are usually the big ones: F-150, Ram, Titan, Silverado. So you can imagine my slight apprehension about being handed the keys to a 2020 Ford Ranger.

I thought my fellow residents will ridicule me but it turns out, country folks love their pickup trucks irrespective of size. They also tend to get excited when a new one comes to market—taking note and sizing it up against their personal favorites. People flagged me down me more than once while filling up or loading the groceries from curious passersby intent on a closer look.

Like the old Ranger from days gone by, this new model serves up a truck option that’s smaller, easier on fuel, and more maneuverable than larger pickups. This means it’s easier to park in more places, handles tight-quarters city driving with less stress, and will get you around with a more reasonable fuel bill.

That’s thanks to its powertrain, one that’s arguably the most cutting-edge in the game at the moment. Thanks to Ford’s widening deployment of EcoBoost technology, it’s the only turbocharged option, too.

The 2.3-liter turbo-four is small but mighty. Drivers get 270 horses and over 310 lb-ft of torque. Thanks to the turbocharger the 310 lb-ft of peak torque is not only more compared to its V6 powered rivals but is available from as low as 3,000 rpm.  It essentially translates to less effort and lower stress on the engine which also helps conserve precious gas.

Ford has hooked the engine up to a 10-speed automatic transmission. Though it does sound like a lot of gears to shuffle through, it greatly contributes to the overall refinement and mileage especially during long stints on the highway. The transmission can skip multiple gears in each direction—each ratio is an option and not a mandatory step on the ladder.

It’s a smooth operator too. Despite the plethora of gears you will barely ever notice it shuffling through them unless you stare intently at the tachometer. It’s all most impressive in sedate driving: there’s plenty of snap but you hardly hear or feel a thing. Even at full throttle, the sound is barely louder than a hum. It’s not the sportiest or the most appealing of engine noises but we’re sure the quietness of the engine will not be an issue for most.

To make it clear: The Ranger’s engine feels snappier, livelier, quieter and more refined than larger V6 motors of the competition.

The powertrain is one of the two best things about the new Ranger by your writer’s estimation. The other? The way it handles itself on roads and trails.

In a nutshell, the new Ranger’s driving character feels nicely dialed-in. The steering and suspension seem well adapted to all driving situations.

For instance, at low speeds, the steering feels light and lazy. You can one-finger your way through trails and parking lots, and the effort and feel are consistent in your hands no matter the surface. The Ranger’s steering is as light and creamy making a three-point turn in the mall parking lot as it is navigating one on your favorite stretches of busted-up trail.

Even pointed down very rough and uneven surfaces, the steering doesn’t tug and pull at the hands. This adds a nice touch of sophistication to something that looks like it belongs only in the wilderness.

The ride quality stands up very well to rough surfaces too. Even with the beefed-up FX4 off-road suspension, the ride is often car-like on smoother roads and highways. On rougher roads, drivers will feel the signature rigid truck jiggle, but just a bit.

It rides like a truck—but a comfortable one that feels like someone spent some time fine-tuning the suspension and how it tackles rougher roads and trails. Even in the rough patches, the Ranger feels well behaved and balanced, it’s not until the ruts and humps appear that it starts to unsettle. Even then, despite all the jostling around, the truck feels solid and tough.

On the highway, noise levels are relatively muted, and the steering weighs up enough to lock you into your position between the lines, but without feeling too labor-intensive when you need to steer. Brakes are about average for the segment in terms of pedal feel and performance too. Ditto the headlamps which could have had a better light spread.

There’s also shift-on-the-fly 4×4, supported by an array of terrain management software that can instantly optimize vehicle systems for use in specific settings, like grass, mud, or sand. My tester only had two and four-wheel drive modes, including 4LO. There was no 4×4 AUTO setting.

Trail Control is like cruise-control for the bush. Ranger drivers can set this to speeds ranging from “brisk walk” to “slow crawl”, and the Ranger’s electronics work to maintain that speed at all times—no matter the surface, incline, or traction level. Throttle, braking, shifting, and other measures are adjusted accordingly, automatically, and with millisecond precision.

Within the laws of physics, your Trail Control set speed is locked and loaded and never varies. Engaging the system, therefore, negates the need for the driver to use the pedals, allowing them to only focus on steering instead.

Off-road enthusiasts and purists might turn up their noses at the idea but it is a boon to novices. Not everyone wants to prove how hairy their chest is by negotiating difficult terrain in full manual mode and operating the truck like a nuclear submarine. Most drivers just want the most effortless way across the bush and the Ranger’s Trail Control delivers on that. The FX4 also comes with skid plates and off-road tires and a locking differential, stuff you might scoff at in the city but are absolute necessities out here in the countryside.

To finish up, the Ranger offers just the right mix of off-road accessories and driver aids to make the skill level of its driver, if they so choose, irrelevant.

The Cabin May Disappoint

Now, let’s get to the area where some shoppers may be disappointed: the interior.

Most pickup truck cabins aren’t trying to blow your socks off—the Jeep Gladiator’s is quite nice though—but much of the forward scenery from the Ranger’s driver’s seat screams “2013 Ford Focus”.

Shoppers after more logical placement of certain controls, more modern readouts and switchgear, and more high-tech, modern touches do have better options. Everything works just fine, and most of the controls are easy to find and use, but the whole visual execution may be too old-school for most tastes.

On-board gripes include the exclusion of split-folding seats. The rear bench does fall flat but either all of it does or none of it, reducing flexibility. Occupant space in the rear is sufficient for two adults of about 5’10”, little more. I found the lower center-stack controls hard to read as well, since they’re fairly small, dimly lit, and positioned low on the center stack.

There’s redemption further up that stack though, by way of a clever, fast, logical and very responsive central command touchscreen that’s easy to learn and navigate. Full smartphone connectivity keeps drivers easily connected to their native voice-assistant at all times. I noted no issues with nearby storage for smaller items, nor access to nearby charging provisions. It also gets automatic climate control and a power-adjustable driver’s seat.

The safety suite includes blind spot monitoring, adaptive cruise control, automatic lights, and more. CCuriously though, a smart-key system and a push-button start have been skipped on the Ranger.

To summarize, Ranger is a smaller pickup that’s nicely behaved, offers a great powertrain with pleasing performance, and backs its drivers up with a solid feel and plenty of hardware and electronics for the aspiring off-road enthusiast. Shoppers unbothered by the dated cabin should find it one of the most compelling machines on the scene today.