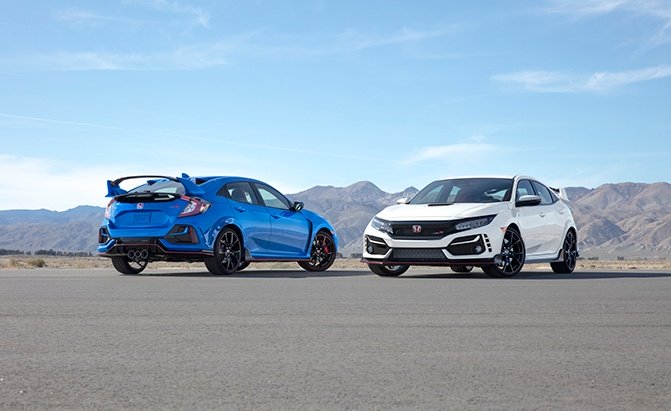 Evolution, not revolution. That was the name of the game for Honda as it unveiled the updated version of its mad hot hatch, the Civic Type R, at the Tokyo Auto Salon.

The bald figures are still the same: 306 hp and 295 lb-ft of torque finding their way to the front wheels via a six-speed manual and a limited-slip differential. Also sticking around is the ability to swap between three driving modes: Comfort, Sport and +R. So far, so good.

There’s a different nose and rear bumper to set the 2020 model apart from earlier models. It’s mostly a case of spot-the-differences, with the most noticeable change being a larger grille opening up front to aid cooling. Easier to spot is the bright new exclusive Boost Blue hue. We dig it.

Instead of drastically altering the Type R’s origami looks, Honda has instead focused on changes under the skin and as inside the cabin.

The engineering team has fit new dampers, stiffer rear bushings as well as a modified front suspension under the 2020 car. It promises to enhance both the ride comfort plus the grip and steering feel of a car we wouldn’t consider lacking in any of those departments.

Stopping is handled by new two-piece brake rotors plus improved brake pads, with the two-fold goal of less fade and improved high-speed braking.

Honda’s snick-snick shifter is another of the areas of improvement for 2020, adopting a restyled knob and even shorter throws. The steering wheel is new too, and now wrapped in Alcantara.

A few bits of tech join the show, with the full Honda Sensing suite of driver-assist tech arriving alongside Active Noise Control. The latter will pipe in noise depending on the chosen drive mode.

More information on the 2020 Civic Type R will arrive ahead of its on-sale date later this season.