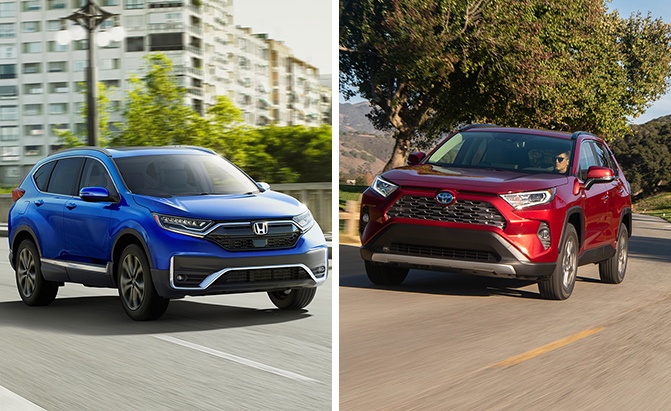 The Toyota RAV4 and Honda CR-V were two of the first compact crossovers on the market. How do they fare against each other in 2020?

Sensibility has become the driving factor behind why crossovers have taken over the market: they have the right mix of practicality, utility, and value that families need. And, of course, to most people they look cooler than old-timey sedans or those “boring” minivans.

In the midsize crossover market, there may be no more sensible choices than the Honda CR-V and Toyota RAV4, two vehicles from two Japanese brands known for making no-frills, reliable, sensible machines. In the battle for sensible supremacy, which of these two is a better purchase? There are plenty of factors to consider, so let’s break it down.

CR-V: The Honda CR-V is one of the most popular compact crossovers on the market, offering people a reliable and well-rounded family vehicle. The CR-V was the first self-produced utility vehicle Honda ever offered. Launched in 1995, it arrived on North American shores in 1997.

The CR-V was updated for the 2020 model year and features subtle changes and the promise of a hybrid variant that will be added to the lineup in 2020—something the competition already offers.

RAV4: A hugely significant model for the Japanese automaker, the RAV4 has been in production since 1994. Although it looks quite different today from the humble first-generation model, its ethos is the same: to provide people with a reliable and easy-to-drive crossover with plenty of room for cargo and passengers.

The first RAV4 was a little three-door crossover with a rear-mounted spare tire, and it was even available with a removable soft top roof at the time. Today, the crossover is much larger, sporting a boxy and aggressive look along with optional all-wheel drive and a long list of standard safety features.

Toyota gave the RAV4 a full remodel for the 2019 model year. The small SUV has gradually increased in size over successive generations, and the latest one continues that tradition, growing by an inch or two. Interior space is up over the previous model, particularly in the back seat, while under the skin the new RAV4 gets a more capable all-wheel drive system and a hybrid option. Summer 2020 will also see the addition of the RAV4 Prime, a 302 hp plug-in hybrid.

CR-V: The Honda CR-V has a youthful and sporty exterior, like many other Hondas today. It has a rather busy front end with available LED headlights, while the rear features L-shaped taillights and an integrated hatch spoiler.

RAV4: Visually, the RAV4 better fits in with the rest of Toyota’s truck-and-SUV lineup. With an angular grille and chiseled flanks, it looks more like a mini 4Runner than your run-of-the-mill mall-going crossover. The RAV4 also offers a TRD Off-Road trim, only available with the gas engine, which is more suited to dirt, gravel and light rock-crawling.

Bottom Line: Although both are good looking crossovers, we find the RAV4’s butch off-road credibility more appealing and unique in this segment.

CR-V: The CR-V has 39.2 cu-ft of cargo space with the rear seats up. Folded down, the seats fall flat and can swallow 75.8 cu-ft worth of luggage with ease. The total passenger volume stands at 102.9 cu-ft. Up front people are treated to 41.3 inches of legroom; backseat passengers barely lose out with 40.4.

Bottom Line: While the Toyota is a roomy and comfy family hauler, the Honda is even more spacious and beats it in every measurement.

CR-V: the Honda CR-V is only available with the 1.5-liter turbocharged four-cylinder engine that is mated to a CVT gearbox in either front- or all-wheel drive flavors. The engine makes 190 hp of power and 179 lb-ft of torque. Some CR-V owners have experienced problems with this engine, it should be noted, which we addressed in our article Honda CR-V Turbo Problems? You’re Not Alone. But Honda is offering a year’s worth of additional warranty with its turbo models which should help put some anxious minds at ease.

RAV4: The sole gas-only engine offered in the RAV4 is a naturally aspirated 2.5-liter four-cylinder, delivering 203 horsepower and 184 lb-ft of torque. An eight-speed automatic transmission is the only gearbox offered.

The same 2.5-liter engine is offered in a Hybrid version, with a combined net horsepower of 219 and an ECVT automatic transmission.

Three kinds of all-wheel drive are offered: the one that’s standard on hybrid models, plus one with torque vectoring and another without. Both arrangements offered on combustion-powered RAV4s feature Multi-Terrain Select, a knob on the center console that allows the driver to easily tailor the system’s performance to varying surface conditions from mud and sand to rock and dirt.

Bottom Line: Both of these cars have good fuel economy, but the RAV4’s Hybrid offers better savings on gas and more poke for a relatively small price hike. Thanks to the larger engine capacity, the Toyota will feel more at home on the highway than the turbocharged Honda. Plus, the availability of the hybrid only makes the deal sweeter even if it does come at a (small) premium.

CR-V: Honda knows how to make a well handling car and the CR-V is pretty athletic, all things considered. When we reviewed the pre-facelift CR-V, our editor noted that it was “a little rigid and truck-like,” but that it also had a “tremendously smooth ride aided by its new suspension design.” We also liked the slightly heavy yet nimble steering.

RAV4: This larger crossover’s steering feels surprisingly direct, as it’s nice and responsive on the road. This is so far removed from the past RAV4s, which weren’t at all fun to drive, being either soft and floppy, or too stiff. The chassis is solid and doesn’t get rattled easily. As for steering feel, the RAV4 is precise, smooth and quick. The brake pedal is, unfortunately, a bit too soft.

Bottom Line: This isn’t such an important factor in this segment, but if you like sportiness and want a crossover, we’d opt for the CR-V. The RAV4, although much improved in its dynamics, still handles more like an SUV compared to the car-like dynamics of the CR-V

Even the base model comes with a fair slug of standard kit, including LED daytime running lights up front and taillights out back, a backup camera, keyless entry, power-folding mirrors, 17-inch wheels, and a 7.0-inch touch screen with Apple CarPlay, Android Auto, and Alexa integration.

More than 20 years on, the Toyota RAV4 and Honda CR-V are still two of the best compact crossovers on the market, proving that sensible is the right path to choose in this segment.

The RAV4 is better than ever, offering drivers a practical crossover with a unique style and a lot of useful features. We love the inclusion of standard driver assistance technology, the interior is also a highlight, and we appreciate that there is a hybrid option for those seeking better fuel economy. Although we have determined the RAV4 isn’t the best crossover in its segment and isn’t as well-executed as some of its competitors, you can’t go wrong considering the brand’s reputation for bulletproof reliability and great resale value.

When the fifth-generation Honda CR-V debuted, it quickly set the benchmark for the compact crossover segment with its excellent practicality, comfortable and roomy interior, value, efficiency, and ease of use. Our editors also awarded the CR-V as the 2017 Utility Vehicle of the Year. Even now that it’s a couple of years old, it still manages to hold its own against some very good competitors, and we expect Honda to up the ante once again when the model is refreshed.

Although we no longer consider the CR-V to be the best in the segment, it’s still our pick in this comparison — an excellent and practical all-rounder with proven reliability.

Facebook Twitter Google+ LinkedIn Pinterest
Previous article Toyota Highlander Plug-In Hybrid Not Coming (For Now)
Next article Extended Service Contracts: Do You Need One, and Why?