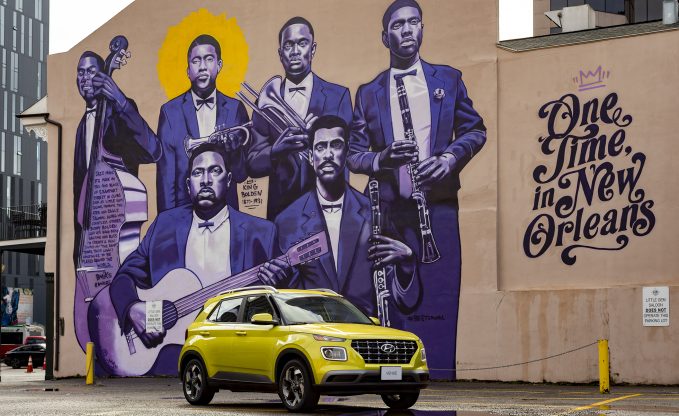 Nearly twenty-five years ago, the creators of Star Trek decided to go back to the well one more time in search of TV gold. Riding high on the recent success of The Next Generation and Deep Space Nine series, Berman et al launched Voyager, a third show which was a similar – yet unique – take on a familiar formula.

At the time, talking heads – and even die-hard fans – were questioning the decision to launch yet another iteration of the recipe. Who would watch it? From where would it draw fans? Is there a demand for one more?

Hyundai seems to be asking itself the same questions, at least in reference to its lineup of SUVs and crossovers. When the Tucson appeared in the 2005 model year, it was pitched as the brand’s smallest rig. A few years later, Hyundai moved the goalposts and introduced the Kona, sized – you guessed it – one size smaller than the Tucson. Now we find the Venue, a machine that returns to the compact crossover well one more time in an effort to harvest sales from the entry-level-price end of the arena.

Has it worked? Has Hyundai found success as Paramount did with Voyager or will this be a short-lived tale like Joey? We traveled to New Orleans to find out.

First, some perspective. Standing just 158.9 inches long on a 99.2-inch wheelbase, Venue is 5.1 and 3.2 inches shorter, respectively. Compared to a yardstick that most of you lot can instantly visualize, Venue is about half a foot longer than a 2020 Mini Cooper. This is a small car.

And a car it is, make no mistake. All-wheel drive will not be on offer when Venue goes on sale in this country, though the suits at Hyundai are aware that a certain corner of the market may be clamoring for that feature. Showroom sales reps will surely be trying to flip them to the larger (and more expensive) Kona, a machine which is indeed capable of sending power to all four of its wheels.

It’s worth noting at this point that Don Romano, President, and CEO of Hyundai Canada, told us they initially though Kona would appeal solely to younger buyers, thanks to a myriad of reasons from price to features, it’s selling to the gamut. With that in mind, he said, Venue was born as an entry point to the brand in the hopes of attracting new and young customers.

This helps to explain several of Venue’s styling and feature choices, not the least of which is its color palette. The bright Acid Yellow hue of our test car attracted positive attention as we tooled around New Orleans, a city whose residents are used to seeing all brands of wild’n’crazy, particularly on Bourbon Street. In that vein, Hyundai made a lot of noise about how Venue is “right-sized” for navigating the streets of a city. This was proven true in spades when your author decided it would be a good idea to turn onto a side street off Bourbon, only to be faced with a phalanx of delivery trucks and construction gear. All hands emerged unscathed.

Right-sized on the outside doesn’t mean it’s cramped on the inside, at least in the front row of chairs. Your author, who stands 6’6” in his size 13 stocking feet, fit just fine in Venue’s driving seat with plenty of legroom and enough headroom to wear a hat covering his rapidly balding pate. Second-row lodging is understandably less commodious, especially when the front seats are adjusted in a completely aft position. If you’re in a Hyundai showroom and your brood number’s more than two, it would behoove you to sample a Kona or Tucson.

Hyundai spox went through great lengths to elucidate that design details are important to Venue’s target demographic, explaining the optional dashes of exterior color on various parts of the interior trim. The rest of its interior will be instantly recognizable to anyone who has spent time in any other Hyundai, with logically placed controls and a nifty parcel shelf directly ahead of the passenger. A USB outlet (or wireless charging) in this cubby would exponentially amp up its usefulness, Hyundai, if you’re listening.

Cargo space behind the rear seat measures just over 18 cubic feet. Hyundai has designed a too-clever false floor in the Venue’s cargo area, one which can be lowered about a five inches toward the spare tire. It’s a smart feature but I can’t fathom why one wouldn’t place the floor in its lowered state since it opens up more room. Our recommendation is to set it and forget it.

You’ll notice we have yet to say much about Venue’s powertrain. That’s because this diminutive little roller skate shares much with the subcompact Accent. Under the hood is a 1.6L four-banger rated at 121 horsepower and just 113lb.-ft of torque. This provided enough grunt in and around New Orleans but was, erm, animated at highway speeds on the I-10 near Mid-City. As mentioned, this is a front-drive only affair, a decision which may disappoint some but surely contributes to the Venue’s fuel efficiency. Expect economy in the mid-30s from the contentiously variable transmission. A six-speed manual will be available on base Venues. Buying advice? That’s the one to get, even if Hyundai estimates only 10% of shoppers will do so.

In America, Venue will start at $17,250 for a stick-shift SE model packed with features like lane-keeping assist and am 8-inch infotainment touchscreen. Yes, CarPlay and Android Auto are standard. Add $1200 for the automatic transmission and a further $700 to upgrade to the SEL which brings the likes of automatic climate control and a navigation system.

Will Hyundai have a successful Star Trek-like return to the well or will they come up empty? History suggests the former, given the brand’s penchant for offering oodles of features in a smartly styled and reasonably priced box.

The Venue should be appearing at your local Hyundai dealerships as you read this. Now, if you’ll excuse me, I’m off to watch reruns of DS9 on Netflix.