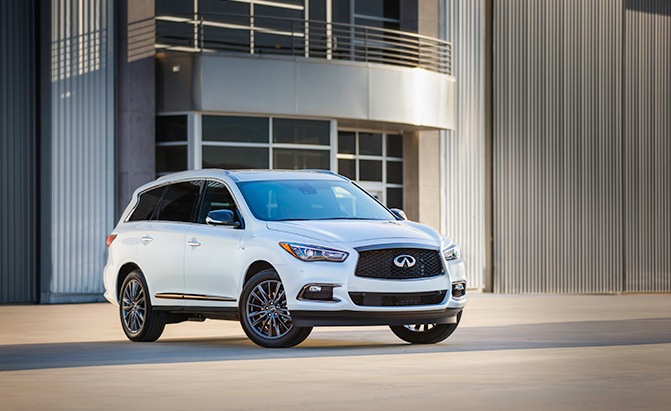 The Infiniti QX60 is the best-selling vehicle in the entire Infiniti portfolio.

As folks gravitate towards SUVs and crossovers to purchase, the mid-size offerings from Infiniti and others become more and more appealing. Infiniti is celebrating its 30th anniversary and we thought it’d be worth taking some time to revisit its top seller.

The QX60 is one of the oldest vehicles in the lineup, and we can assume that because the vehicle didn’t get the refreshed technology that a full-model refresh is likely in the works sometime soon—alongside the niche-flling QX55.

The 2020 Infiniti QX60 is powered by a 3.5-liter, naturally aspirated V6 engine making 295 horsepower and 270 lb-ft of torque. That power is sent to either the front wheels or all four wheels via a continuously-variable automatic transmission. Fuel economy is rated at 19 mpg in the city, 26 mpg on the highway, or 22 mpg combined.

The Best Bits are Inside

The interior is where the QX60 really shines. Yes, the infotainment and tech aren’t modern, but the actual interior material is top notch. The leather is quality. The wood trim feels expensive. It’s a very nice place to sit for an extended journey.

Access to the third row is a bit limited, as it is in most three-row crossovers in this class, but if you need to use the seat it’s there. Little ones will be comfortable, but adults aren’t going to be very happy. The nice thing is you can fold the rear seats down and increase the cargo capacity to 40.2 cubic feet.

The rear power liftgate also creates an expansive opening for getting cargo in and out. The swooping exterior lines don’t hinder the gap, unlike on some other Infiniti products, and the flat load floor makes slinging in a suitcase or other heavy object easy.

Opting for the panoramic moonroof opens up the cabin to a lot of light, making the interior feel larger than it is. Paired with a light-colored interior, it really feels bright and airy inside.

Safety technology is also on board, including blind spot monitoring and rear cross traffic alert. There is autonomous emergency braking and adaptive cruise control. The only thing really missing is Infiniti’s ProPilot Assist semi-autonomous tech, which is available on the smaller QX50, but don’t be surprised to see it added when the SUV is updated.

Acceleration is good for a three-row crossover, though some competitors with turbo engine offerings, like the BMW X5, have a bit more grunt available. Power is delivered smoothly via the CVT.

CVTs don’t have the greatest reputation, because they don’t shift like a traditional automatic. As they’ve evolved, manufacturers have programmed in simulated gear changes to make it behave more how people are used to. If you’re on the fence because you’ve read things about this type of transmission, take one for a test drive and see what you think.

The QX60 is at home running the day-to-day errands of life, or cruising down the highway. But it’s not an inspired, sporty drive. The QX60, unfortunately, isn’t a vehicle that encourages you to take the long way home or find a twisty back road.

That doesn’t mean SUVs can’t do that—there are sporty alternatives from Audi and BMW, for example—but the QX60 is better off as a luxury cruiser.

There are no base models for QX60, as even the Pure entry-level trim comes with heated front seats and tri-zone fully automatic climate control. With delivery, the Pure front-wheel drive model starts at $44,350 in the United States. All-wheel drive models command a $2,000 premium.

One of the biggest competitors to the QX60 is the three-row Lexus RX L. The Lexus has better in-cabin technology, but also has a controversial spindle front grille. The body lines on the Lexus are much sharper than the smooth elegance of the QX60.

The German competitors all have price points significantly higher than the QX60 for similar levels of equipment.

The QX60 is the oldest vehicle in Infiniti’s current lineup, and it’s showing its age with the in-cabin technology and standard engine offering. However, it delivers a premium experience for a reasonable price.

While it’s certainly not best-in-class, if you like the styling and need three rows, you should put it on your list to test drive.