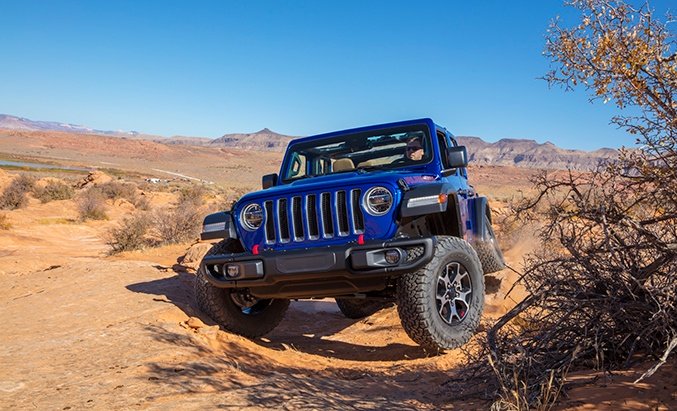 Jeep has answered the yellow-pump call, dropping a diesel engine into the popular Wrangler.

It’s a mild shock to think this is the first time the iconic Wrangler has had a diesel engine in North America. Fans of low-end torque will now have the option for one, starting as early as next month.

A modified version of FCA’s 3.0-liter V6 slots underhood for duty here, with ratings of 260 hp and a grunty 442 lb-ft of torque. What the low-revving engine lacks in horsepower—the gas-powered 2.0- and 3.6-liter engines make 270 and 285 hp, respectively—it more than makes up for with stump-pulling torque, with nearly 150 lb-ft more than the 2.0-liter turbo’s 295.

Sending that power to the ground is a different eight-speed automatic transmission than the rest of the lineup offers. Still a TorqueFlite unit, the 8HP75 is a more robust item capable of handling the extra torque. Jeep says it features over 40 shifting maps to maximize fuel economy and performance—on-road or off. Sorry, self-shifting fans: the six-speed manual isn’t an option.

On the plus side, Jeep is expecting high-20s for mpg, and a range of roughly 500 miles.

The new engine will be available exclusively with the four-door body style, which Jeep says makes up the majority of Wrangler sales. Trim levels include the Sport, Sahara, and Rubicon options. All three feature Dana 44 axles front and back and a 3.73 axle ratio.

Interested parties can expect to pay roughly $3,000 over the gas-powered V6 for the diesel model. The Jeep Wrangler EcoDiesel should start showing up in dealers in December. Now we just wait for the diesel-powered Gladiator…