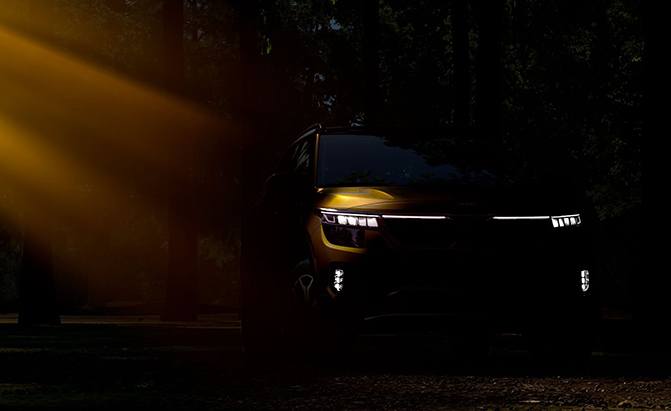 Kia will likely grow its crossover lineup later this week, based on a teaser image for the LA Auto Show.

It’s the usual sort of shadowy hint, with little more than the mystery model’s lighting visible. There’s a bluff front end, and it seems to be sitting in the middle of a forest, suggesting a crossover of some sort. That’s about all we can make out from what Kia’s provided.

Hold on, let’s get the CSI crew on it. Enhance…

This isn’t a big model like the well-received Telluride. No, what we’re looking at is the Kia Seltos. The compact crossover launched in other global markets earlier in the year, slotting in between the Soul and the Sportage. All of the details line up: the thin lights running over the top of the “tiger nose” grille, the multi-element LED headlights and the stacked LED foglights. Even the wheels match what’s available in other markets:

The Seltos shares its platform with the Hyundai Kona, though this isn’t a simple redesign. Compared to Hyundai’s funky cute ute, the Seltos rides on a 1.6-inch longer wheelbase, with the whole package stretching 172.2 inches (an increase of 8.2 inches). The Seltos is the same 70.9-inch width as the Kona however—and the boxy Soul for that matter.

Overseas the Seltos uses both gasoline and diesel four-cylinder engines. The lineup includes Kia’s familiar 2.0-liter naturally-aspirated and 1.6-liter turbocharged units, which both see duty here in the Soul, Kona, Veloster and Elantra. If we were the betting type we’d put our money on those two engines arriving Stateside, likely paired with either a six-speed auto or seven-speed DCT a la Kona. The Seltos uses a CVT in certain trims elsewhere, which is also a possibility here with the 2.0-liter engine.

Inside, the Seltos majors on tech with either an 8.0- or 10.25-inch capacitive touchscreen infotainment system. Another 8.0-inch display sits in front of the driver, while there’s also a heads-up display (HUD). Kia’s comprehensive suite of safety features, including lane-keep assist, emergency braking, pedestrian detection and adaptive cruise control, is also available.

That’s all based on other markets, however. We’ll know soon enough what’s in store for North America: Kia will kick off its LA Auto Show presentation early in the morning on Wednesday, November 20.