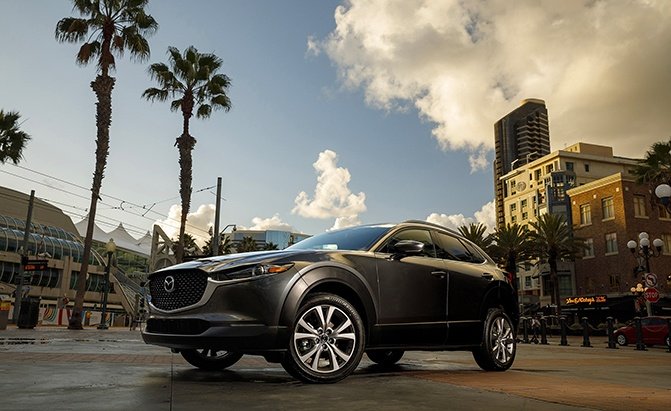 The crossover boom is inescapable, even for Mazda, a marque long revered as the maker of fun-to-drive, reasonably priced cars. Its Mazda3 compact sedan formerly served as a gateway into the brand, but even it waned in popularity with the rise of enthusiasts’ least-favorite mildly lifted segment. Thus, the CX-3 crossover was born to woo singles and small families into a Mazda with an entry-level subcompact crossover.

In the past few years, Mazda realized there was demand for a crossover that fell somewhere between the CX-3 and the substantially larger CX-5 in size. Smaller families didn’t need the extra space of the CX-5, but still desired the crossover body style mandated by the Agrestic Ranch Lil’ Tots Preschool drop-off zone. Thus, the new 2020 CX-30 compact crossover was born, with plenty of input from a Mazda designer who has a small family himself. (The CX-30’s c-c-c-combo breaker name is due to “CX-4” already being used for a Chinese-market model, in case you were curious.)

Thankfully, Mazda’s new CX-30 continues the brand’s tradition of making crossovers that don’t suck to drive. The CX-30 is easily the best crossover in its price range, with responsive handling and enough power to rack up some speeding tickets on that morning school run.

Haulin’ the Mail and the Kids

Mazda’s four-cylinder, 2.5-liter Skyactiv-G engine delivers 186 horsepower and up to 186 lb-ft of torque, which is more than adequate for a car this size, not to mention downright enjoyable. I never found myself wanting for speed in this car, thanks to ample low-end torque. The CX-30 shifts smoothly using the conventional six-speed Skyactiv-Drive transmission. While the pedals and steering feel lighter than they do in say, an older Miata, they still give ample feedback.

This Mazda handles well enough that you can forget you’re in a crossover as it transfers its weight smoothly and predictably into turns. Long, sweeping turns in our mountain test drive were a joy as the Mazda’s weight set nicely into each one.

Our tester featured Mazda’s trick i-Activ all-wheel-drive system, which sends torque to the rear wheels when needed. Most of the time, the car is predominantly driven by its front wheels, with a little bit of torque sent to the rear. Accelerate, and more torque is sent to the rear wheels to avoid wheelspin. Decelerate, and more torque shifts to the front wheels where the weight of the car naturally shifts when you slow down. It all works seamlessly to the driver, yet it helped a few times in our test drive’s slippery weather.

Should you actually take the CX-30 onto softer ground, Mazda has you covered there, too. Mazda’s predictive torque systems are tuned for pavement, so enabling the CX-30’s Off-Road Traction Assist mode applies maximum torque to the rear wheels, effectively making the car full-time all-wheel-drive. It lets the engine send maximum torque to the entire all-wheel-drive system, and traction control kicks in aggressively to brake any spinning wheels.

Mazda’s standard i-Activsense suite of safety features and driver assists is included as well, including radar cruise control with stop and go functions for bad traffic, lane departure warnings with lane-keep assist, automatic high beams, Smart Brake Support (which slows the car when the risk of a frontal collision is detected), and driver attention alerts.

In case you forget something, a three-year subscription to Mazda Connected Services is included as standard, enabling you to double-check the door locks and lock them if need be, start the car remotely, and monitor key systems like tire pressures and oil all through the MyMazda phone app.

In the CX-30, Mazda tried to make everything as easy as possible for the driver to use. The radio and HVAC controls I most frequently tweak while driving were controlled with real, physical knobs and buttons. Two of the most frequently used radio controls—volume as well as the forwards and backwards arrows to move through playlists or radio stations—were right there on the steering wheel across from the cruise control settings. Thank goodness.

Mazda’s designers explained that this is meant to keep your eyes on the road, and they’re absolutely right. Big, all-encompassing control screens may look clean and futuristic, but they make us less safe behind the wheel by forcing us to spend more time looking at the car’s interior instead of the road ahead. Physical buttons and knobs provide tactile feedback that a screen doesn’t. You can tell when you’re holding the CX-30’s smaller radio knob instead of the larger infotainment unit wheel by feel without ever having to take your eyes off the road.

Just a Nice Place to Sit

This simple dedication to buttons is one of the best features about the CX-30’s interior, but that’s no small praise. It’s a genuinely a comfortable place to sit, and the two-tone, brown-over-white interior found in my Polymetal Gray test car was particularly attractive. Dual-zone climate control and heated seats made our unusually cold and damp test drive far more bearable than it had any right to be.

The soft leather seats in our test car weren’t too aggressively bolstered but still held me in place on twisty mountain roads. The seating position was relatively high compared to many compact or sports cars, but not annoyingly so. As a shorter (5’4”) person, I frequently feel like I’m sitting on a barstool in many taller crossovers and trucks even in the seats’ lowest settings, and the CX-30 thankfully felt more like sitting in a regular chair.

Even the rear passenger space feels fairly bright and open with slanted footwells for extra leg room, although taller people will still likely encounter the same issues with leg space as they have in other compact cars.

The softer materials used on the interior make the CX-30 feel like a more expensive car than it is. There wasn’t much road noise to speak of, and everything in our admittedly brand-new tester felt pretty solid. Mazda even removed one frequent source of road noise and eventual interior rattles by moving the front bass speakers out of the door and into the front footwell.

While years of covering loud motorsports means that I won’t be able to judge our test car’s upgraded 12-speaker Bose sound system as an audiophile would, it sounded really nice. The system even supported a number of high-resolution file formats up to 9,216 kbps, including lossless FLAC audio files. (Compact discs, in comparison, only deliver 1,411 kbps.) Mazda also throws in a six-month or 2 GB trial subscription to its in-car wifi system.

Even the front console/armrest has its own comfort-oriented party trick. The armrest slides backwards before it hinges up to limit the amount of shoulder movement needed to access the console’s storage bin. This means that you can also leave the armrest down but slid back for easy access to the front of that storage bin, which is pretty neat.

Cargo space was also adequate. My drive partner and I were able to fit two huge travel bags plus a couple smaller camera/laptop bags in the back with a little bit of extra floor space to spare.

It’s also just a handsome looking vehicle, with sharp curves that flow smoothly into each other without compromising the rear window visibility too much. Plastic cladding doesn’t just give the CX-30 the rugged appearance of an adventure-bound vehicle that every mall-going crossover buyer desires. It also visually breaks up the tall sides of the car. The end result is a vehicle that doesn’t look as tall as your average crossover and that stands out from the anonymous egg-blob designs that are all too common in the segment.

While it was a relief to hear that Mazda wants real buttons in its interiors for the foreseeable future, some controls simply weren’t as intuitive as I wanted them to be.

Most HVAC controls were labeled on the top of the buttons themselves, but a couple only had their functions labeled above the buttons, which wasn’t as easy to see from the driver’s seat. You would probably get used to which button does what over time, but I would have appreciated the extra labelling as someone new to the car.

The decision to skip a big touchscreen in favor of controlling everything on an 8.8-inch screen with a central control wheel is a mixed bag as well. On one hand, the selection wheel delivers the tactile feedback Mazda wants, and mounting the screen close to the driver’s line of sight and not making it a touchscreen discourages less safe mid-drive tinkering. Yet it took a lot of extra attention away from driving to navigate to anything that’s buried in an on-screen menu while driving.

Case in point: My drive partner liked using the heads-up display, which is a nice, bright one that displays most of what you need to know right where you’re looking at the road ahead. However, I find them slightly distracting. There is no physical button for the heads-up display, so I had to go through several on-screen menus to turn it off.

Frankly, I should have pulled over to deal with this because it took that much of my concentration away from the road. Consequently, I refused to deal with anything else that was buried on that screen for the rest of the time I was driving.

No one really enjoys seeing a sea of buttons anymore, but perhaps Mazda should consider adding a few more buttons back in and leave the screen for more complicated vehicle settings you’re unlikely to touch while moving.

Switching audio sources (between FM and XM radio, for example), is also buried on the infotainment screen as opposed to being grouped with the audio control knob. If every radio station is annoying you to the point where David Hasselhoff’s Greatest Hits on your phone is the better option, you may want to pull over for a second to deal with it, and that’s frustrating. The upside is that you can program frequently listened-to audio options into the star-shaped Favorites button, but I think audio sources still deserve a dedicated button, especially for a car that’s likely to be used for road trips or driven by multiple members of one family.

Apple CarPlay and Android Auto are available for a more familiar on-screen experience, however, you’ll still be controlling those with the infotainment control knob.

If you care about driving at all, this is the small crossover to buy. Too often, cars in this segment have elements of the driving experience that leave me unsatisfied. Handling well, but lacking power. Having power, but handling like a drunk moose on stilts. Numb controls. Awkward seating positions. You get the idea. Fortunately, the Mazda offers the full package that’s actually pleasant to drive.

The CX-30’s lone engine option is the most powerful in its class of small non-luxury crossovers, and it packs a competitive starting MSRP of $21,900 US. All-wheel drive costs only $1,400 US over the base price. As-tested in Premium i-Activ AWD trim, our car was $29,600 US. So, if you must hop onto the crossover bandwagon, the CX-30 is the fastest way to do it.