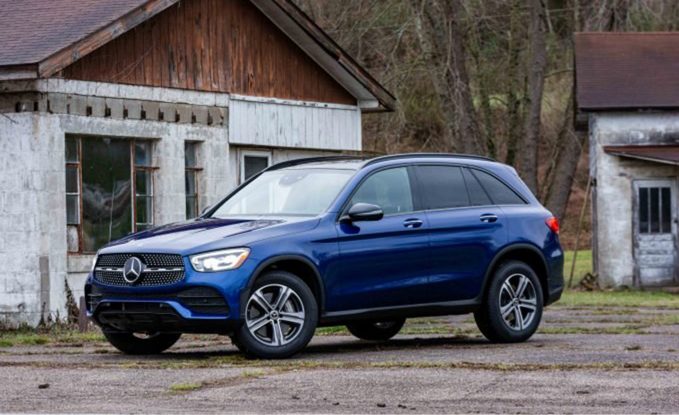 Auto reviewers are a weird lot. We pay attention to details that very few car shoppers ever notice, and we are so jaded by the tsunami of high-tech features appearing each week in our driveways that we often forget that a buyer new to the market after a few years will be amazed (or confused) by the appearance of touch screens, track pads, and voice controls where once there were knobs.

As one might expect, Mercedes-Benz is at the forefront of adding tech features throughout their lineup. This 2020 Mercedes-Benz GLC 300 is no exception — it’s fairly stuffed with glitzy, techy gear to make driving easier, along with making the other things you do while driving a bit less distracting. And nearly all of it works as you’d expect — if you can manage a smartphone, you can swipe right on this compact crossover.

The compact label does apply here — the cargo space is a tad tight, though the usual week of groceries, supplemented by a touch of pandemic-associated supply hoarding, fit just fine. A rather atypical cargo test occurred on my first day with the GLC 300 — we had to pick up a sousaphone (marching tuba) for my daughter to start practicing during the extended time away from school. Normally, my minivan would be pressed into service for the haul, but the Mercedes-Benz handled the massive horn just fine with a drop of the rear seats. Had the handle on the case been arranged differently, the seatbacks could have remained upright.

A real-life cargo test: a Sousaphone just barely fits in the cargo hold of a Mercedes-Benz GLC300, but the carry handle fouls the latch by about half an inch. Dropping the rear seats gives plenty of room.

More soon, including a full review, for @AutoGuide . pic.twitter.com/drY5jkJPCH

The rear seat is, again, tight but usable. The tweens found it workable, though the restless younger child (five feet, four inches tall) did press her knees into my lumbar support a bit at times during a road trip. The GLC isn’t the only car for which this is a problem – assuming your rear seat passengers don’t make a habit of leaning over and falling asleep on their sister’s lap, most people would manage just fine.

The front seats, on the other hand, are nearly perfect. With plenty of adjustability to the driver’s seat – including an extendable lower bolster! – the GLC 300 is a great place to while away hours behind the wheel. The center console is nicely padded where my knee rests, and the chunky steering wheel feels great to hold.

Styling of the GLC 300 is about what one would expect from a compact Mercedes-Benz: it’s attractive, without being either overwhelmingly garish or mildly sexy. I appreciate the lovely Brilliant Blue Metallic paint hue, though it’s an extra cost ($725) option. I’d love it if automakers – this isn’t limited to Mercedes-Benz, mind you – would get away from the nearly-universal black cladding around the fenders and rocker panels of all crossovers. We get it – manufacturers are trying to tell us that this car-based vehicle, riding a bit higher than a sedan, is really a crossover and not just a wagon. People have been buying crossovers for two decades though; they don’t need to rely on this styling crutch.

Regarding technology – the dual screens married to a center console touch pad seem intimidating at first. That’s right – two screens. The usual center screen (10.25 inches diagonally) is paired with an optional ($750) 12.3” digital instrument cluster that replaces the typical gauges fore of the steering wheel. While I fear for the independent European car specialists who will somehow need to repair these high-tech gauges in collector-quality crossovers in a couple of decades, today they offer a clearer view of the important functions of the car.

Besides the ease of controlling the infotainment system via the matte-finished console touchpad, many features of both screens can be managed by swipe functions on the steering wheel itself. See those little dark squares at 9 and 3 on the wheel? They’ll control track or station changes, or various displays on the gauge panel.

Another great innovation is the Augmented Video navigation system, which displays the view from the front camera on the center screen when using the in-car navigation system, and adds floating labels for street names and house numbers. We had to deliver a box of Girl Scout cookies to the in-laws who had been travelling – so we let them continue isolating while we dropped the cookies in a mailbox. Thing is, I couldn’t remember which house to go to, so the augmented reality allowed me to easily see which address was the right one.

Excuse the photo quality – my wife shot this with a cell phone while I was driving. Safety first!

This Augmented Video navigation is optional – part of the $1250 Multimedia Package, which also includes live traffic info for the nav, alongside a speed limit assist system. That last one caught me by surprise – I typically set my cruise control at about 5–7 mph over the limit when on a long interstate drive (when conditions permit) so I can move with the flow of traffic. However, this speed limit assist looks both at traffic signs and navigation data to monitor the local limit, and as I returned to my Columbus home and the limit dropped from 70mph to 65, the GLC 300 responded in kind, somewhat suddenly dropping my speed to exactly 65.

Good thing it did, however – the Ohio Highway Patrol was sitting in the median about one thousand meters past the speed limit change. The speed limit assist can be deactivated by digging through menus, so it shouldn’t be a dealbreaker if you’re accustomed to moving a bit faster than the law allows.

My other gripe with the GLC 300 is with another feature/bug of the adaptive cruise control. If the front cameras and other sensors are blocked by snow or ice, the entire cruise control system shuts down. I’ve noted on other vehicles times that when the adaptive cruise is malfunctioning, a more traditional cruise that maintains a steady speed no matter the obstacles will still work. Not here on the Mercedes-Benz. My drive to the inlaws happened during an odd March snowfall – huge snowflakes with ambient temps a few degrees above freezing, so nothing was sticking. Except to the sensors. I had to drive like a primitive, actually using my foot to modulate speed for about half of my two-hour drive.

I jest, but it was a shock considering how used to cruise control I’ve become on long interstate drives. I’d imagine it’s a difference in safety philosophy between automakers. Mercedes-Benz would rather the driver — otherwise used to adaptive cruise — be fully aware when the system isn’t working as expected rather than drive into the back of a bus full of nuns or something.

Beyond the cruise weirdness, I was pleased with how nicely the GLC 300 drives. Steering is nicely weighted, with a direct feel around town and no dartiness at speed. The ride was controlled over expansion joints, with only a muted thump sounding through the cabin. It’s easy and comfortable to drive all day.

It’s easy to be overwhelmed when shopping for a new car, especially when the interior looks as space age as the one found in this GLC 300. Don’t be afraid – everything is easy to use, and it drives exactly how you’d expect a Mercedes-Benz to drive.