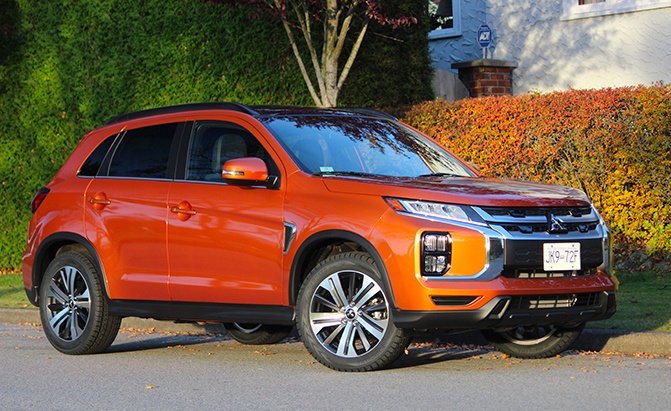 The Mitsubishi Outlander Sport has been given a refresh for 2020, adding the requisite styling updates to be sure, but also a few interior enhancements to better level it with the competition.

But then, some might say the Outlander Sport has always existed in a strange parallel dimension above the competition because it was a bit of a pioneer when it debuted in 2010; at the time, no one was really doing compact CUVs like this; the Ford Escapes and Honda CR-Vs of the world were bigger than this and a little more conventional, perhaps geared to an older, more conservative audience.

Fast forward to 2019 and the arrival of the 2020 Outlander Sport, and much of that attitude remains the same, though it now has a little more competition from the likes of the Subaru Crosstrek and Toyota C-HR.

To counter that, Mitsubishi has gone the “more” route: a more aggressive front fascia with standard LED headlights and DRLs, an underbody skid plate and brighter colors including the all-new Sunshine Orange hue seen here. The rear end, meanwhile, gets new taillight lenses to complete the look. It’s a tough-looking thing, this Outlander Sport, looking ready to contest the snowy holiday season supermarket carpark one day, and the Paris-Dakar Rally the next. Well, maybe not quite, but you get the drift.

Inside, it’s decidedly less inspiring; yes, there’s a new infotainment system complete with Android Auto and Apple CarPlay but that’s about it in terms of niceties. The rest, from the climate control knobs to the steering wheel design and gauge cluster design is all pretty businesslike, which I suppose is okay for simplicity’s sake but a little limp fish-like in its execution. You do sense Mitsubishi went to great pains to get the interior quality right, though; the materials used are of a high grade and it’s all fastened together tightly, keeping the proceedings relatively squeak-free. One thing that did catch my attention in terms of flare, however, is not just the fact that you can have a full-length sunroof as my tester did, but that Mitsu has actually added a kind of mood lighting through amber lights mounted on the insides of the roof rails so they can glow into the cockpit through the glass roof. I felt like it was a budget take on what Rolls-Royce does with its nine-billion dollar Starlight Headliner option, and I rather liked it.

Other additions for 2020 include blind-spot warning system and rear cross-traffic alert on the top SE and GT trims; unfortunately, we don’t get the optional heated steering wheel that the Canadian-market RVR gets for 2020. There are standard heated seats on all but the lowest trim though, which is nice.

The big news however, is literal: the Outlander Sport feels pretty cavernous inside considering its tight footprint. I found the driver’s seating position to be right on the money and adult passengers had no problem clambering into the rear seats—the Outlander Sport remains one of the biggest vehicles in the segment. On top of that, the leather seats on our tester were beefy and comfortable and felt like they belonged in a car from a segment above. A word of caution, however: a rear-facing child’s seat will cause issues for the front passenger as the seat has to be moved pretty far forward in order to accommodate your kid’s chair.

The new infotainment system, meanwhile, offers a bigger screen but doesn’t move the bar much beyond that. What I found strange was while it’s responsive and intuitive enough, it looks like hardware and software engineers forgot to exchange emails on the new screen size and as a result, icons look stretched, blurry and not scaled up to fit the screen. They’re legible but eventually, the fuzziness gets to you. The tester was equipped the optional 710-watt Rockford Fosgate sound system, which would leave most audiophiles happy with its sound quality output.

Of sportiness and frugality

A look at the dashboard and steering wheel reveals one of the more impressive details of the whole interior, and that’s the sickle-shaped transmission paddles. It is rare that you see such a large pair of these things; most SUVs, CUVs, sedans, and hatches maybe allow their button-like paddles to peek out from behind the steering wheel spokes. Not the Outlander Sport, though. Oh no. These are huge, four-inch numbers that look fit for a race car. The Dakar rally it is, then?

Mitsubishi says that the Outlander Sport’s S-AWC (“ Super All-Wheel Control”) system has taken notes from the company’s various rally efforts, namely a torque-splitting system that helps the car first rotate through—then stay stable during—long, sweeping corners, the likes of which you tend to encounter on the way up to the ski resort or what have you. In normal conditions, meanwhile, the rear axle is disengaged to help save fuel. Or, you can go ahead and lock it into all-wheel-drive with the press of a button mounted just ahead of the shift lever. As I drove the Outlander Sport, a sense of confidence permeated even during everyday driving. You feel its potential to conquer pretty much anything you throw its way.

Like the interior, though, the drive is solid without being exemplary. Acceleration provided by the 148 hp, 145 lb-ft 2.0-liter non-turbo four is fine if not necessarily what I’d call “fast”, mainly because it’s restricted by that king of all speed restrictors: a continuously variable automatic transmission (CVT). These types of no-gear gearboxes are great for their smooth operation and contribution to fuel economy but come at the cost of spirited driving. So, while those big paddles are nice to have, there’s only so much they can do with “virtual” ratios to make it seem like you’re actually using them to shift gears. This is no sports car, that’s for sure, and I’m pretty positive a rally car would feel a whole heck of a lot more involving than this.

Outlander Sport’s motorsport connections shouldn’t matter—whether the word’s in its model name or not—because I think deep down, no matter how young Outlander Sport buyers may feel, they’d rather have a vehicle that they can afford. That’s helped by the Outlander Sport’s $22,495 base price ($23,995 for AWD). Most importantly, it’s comfortable to be in, which is the kind of gift that keeps on giving over the course of ownership.