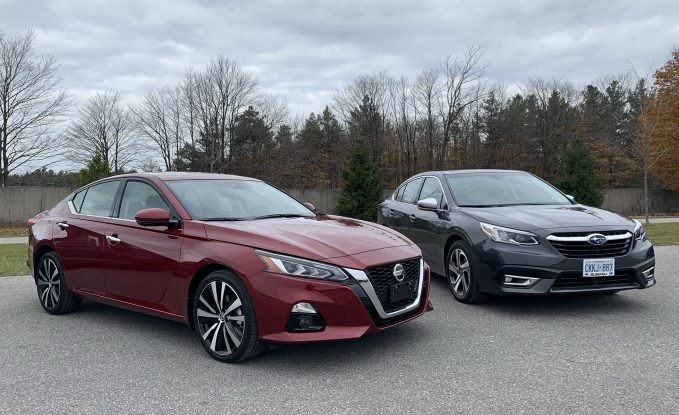 Like the Cheshire Cat slowly vanishing from the Queen of Hearts’ croquet field, the mid-size four-door sedan is disappearing from this country’s automotive marketplace. Two of the Detroit Three are busily pulling the plug on Fusion and Impala. And the Charger and 300 soldier on with underpinnings so old they could be carbon dated.

Not everyone has given up on the segment, though. This is proven by two fresh new entrants on the field, with both the 2020 Nissan Altima and 2020 Subaru Legacy re-upping their sedan game. Refurbished with new tech, styling, and powertrains, which of these more-door family haulers deserves your attention? And, oh yeah, they’re both all-wheel drive.

It will surprise exactly no one to learn that Nissan deploys a continuously variable transmission (CVT) in the Altima. The company has been steadfastly using this type of gearbox for ages. This year, Nissan has endowed the Altima with all-wheel-drive. Our tester came with such, along with the 2.5L direct-injection four-banger making 182 horsepower and 178lb.-ft of torque. If this doesn’t sound like a lot, you’re right; the turbocharged option is definitely the better selection.

Subaru also uses a CVT but deploys a turbocharged 2.4L inline-four making a healthy 260 horsepower and 277lb.-ft of torque. The addition of 80 horsepower compared to the Nissan is understandably noticeable. The Legacy takes off from stoplights with a gusto not present in the Altima. These extra ponies also rear their heads during highway passing maneuvers where the Subie can dispatch that lazy RV with relative ease.

With most of the civilized world making a beeline for crossovers and SUVs, it’s worth talking about the amount of interior space provided by the modern sedan. No, this body style doesn’t have the “let’s fit a dog crate behind the rear seats” level of room. It also doesn’t compare to the cargo space offered by hatchbacks and crossovers. But the amount of space for humans is truly vast.

Nissan has been making noise for years about their Zero Gravity Seats. They are right to do so since they were designed to help maximize posture positioning for greater comfort during long-distance driving. Pushing aside marketing speak, these thrones do contribute to reduced fatigue. They also are some of the most comfortable seats this side of your author’s favorite chaise lounge. Cargo capacity in the trunk is 15.4 cubic feet.

The Subaru’s trunk capacity is just shy of the Nissan at 15.1 cubes. Seats are not as comfy as in the Altima but there are some shrewd storage solutions in the Legacy. Such as a nifty ledge tucked in the dashboard ahead of the passenger. On paper these two sedans are within a hair of each other in terms of measured rear-seat room. But, in the real world when your 6’6” author is trying to fold himself into the rear cabin, Legacy has an ever so slight edge on Altima in terms of rear-seat head- and legroom.

Nissan’s trump card in the tech race is its ProPilot Assist suite of driver assistance tools. It’s a dandy group of kit, easing driver workload by reducing the amount of driver acceleration, steering, and braking input under certain driving conditions. Its functions can be turned on or off via a handy button right on the steering wheel. ProPilot Assist uses a forward-facing camera, radar, sensors, and an electronic control module to help the driver stay in the center of the driving lane and maintain a set speed. Added into the mix are the likes of automatic emergency braking, lane departure warnings, and rear cross traffic alerts. Altima’s touchscreen, however, can’t compete with Legacy’s new jumbotron.

Subaru brings the goods in 2020, installing a tablet-style high-definition 11.6-inch multimedia screen in this and a couple of other snazzy trims. Like with a smartphone, app icons can be moved and configured based on personal preference. Despite this, a real volume knob remains, praise the pharaohs. A physical ‘home’ button would bring added functionality, though a virtual soft home button exists on all menus. Standard equipment includes the EyeSight Driver Assist Technology, now equipped for the first time in the U.S. with Lane Centering Function. When using EyeSight’s adaptive cruise control, Lane Centering Function provides steering assist when the vehicle veers outside its lane. There is also a Big Brother-Esque DriverFocus system that uses a dedicated camera and facial recognition software to identify signs of driver fatigue or distraction.

Altima’s interior will look immediately familiar to anyone who’s set foot inside a modern Nissan. An infotainment touchscreen stands tall atop the dash while small and tidy ventilation controls reside underneath. Clear gauges face the driver and buttons for cruise control and other driver aids pepper the steering wheel. By far, the Altima’s best interior feature is its Zero Gravity seats, sumptuous thrones that will encourage drivers to eat up the miles.

Loading …In the Legacy, some creative and thoughtful storage cubbies abound. It proves that Subaru hasn’t put all their family-minded people to work on their roster of SUVs. The tremendous 11.6-inch touchscreen mentioned earlier comes at the expense of central ventilation. To make room for the screen, the vents on the center stack are now slim to the point where turning on the A/C  feels like being wheezed at by an asthmatic through a straw. Outboard vents are much more functional.

The powertrain in our non-turbocharged all-wheel drive Altima is rated by the feds at 25 mpg in the city and 35 mpg on the highway. The front-wheel-drive Altima, on the other hand, nudges 40mpg in highway driving duties.

As for the Subaru, its turbocharged mill exacts a fuel economy penalty. Particularly on the highway which is not unlike turbo engines. That environment should return an efficiency of 32mpg, with city driving posting a close-to-Altima 24mpg. These numbers strongly suggest the Subaru’s turbo is working more often than not to maintain highway cruising speeds.

Yeah, this is the subjective part of the test but it is one that we can’t ignore. After all, few would buy a car bearing a face its own mother would slug. Nissan grafted its corporate grille onto Altima for 2020. Bookended by a pair of headlight peepers wearing distinctive LED light signatures. Its chrome-bedecked grille plunges toward the pavement like a naughty neckline. Its side profile puts another exclamation point on Nissan’s recent attempt to endow everything it makes with a so-called floating roof.

Loading …Subaru was once the automotive equivalent of the weird kid in the corner eating glue, at least in styling. Its recent trend of choosing to swim a bit more in the mainstream has resulted in some handsome vehicles from the Pleiades brand, including this new Legacy. In black, its wraparound taillights fade nicely into the rear quarter panels.

For the 2020 model year, American customers can expect to find a sticker price of $33,530 for an all-wheel-drive Platinum-grade Altima with the non-turbo four-b. The cheapest trim with this same powertrain costs $25,450. As one would expect, that entry-level car does not have certain luxury niceties such as this car’s Around View Monitor, a boon when trying to parallel park in a tight place.

In America, a top rung 2020 Subaru Legacy Touring XT rings the bell at $35,895. This is one of the two trim featuring the powerful turbocharged engine, with the other priced $1700 cheaper and devoid of a few simple creature comforts.

Even though the segment is shrinking, these two sedans prove there is plenty of life left in the segment. Customers who value the latest and greatest tech while marching to the beat of a slightly different drummer should check out the Legacy, as it is filled to the gunwales with an enormous touchscreen and a yaffle of driving aids. The Altima, however, is more comfortable and gets better fuel economy while still offering a nifty level of driver assistance gadgets, if you loved the 2018 Nissan Altima version you’ll also love this one

Cheshire cat? Not while these two are on sale.