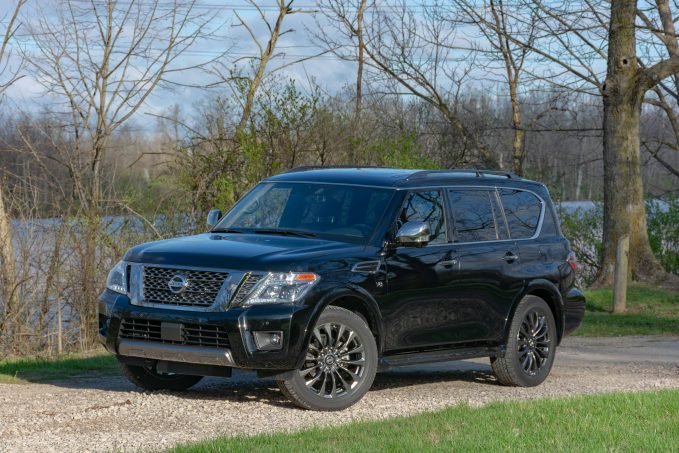 I don’t know why, but I rarely think about the Nissan Armada. As big, three-row SUVs go, it seems to be lost from general consciousness versus the ubiquitous domestic offerings used so frequently for ride-sharing apps.

For the right driver, however, the 2020 Nissan Armada holds a great deal of appeal. Beyond the superb utility of this hulking SUV, the handsome yet distinct styling will keep random people from opening your door in the assumption you’ve arrived to pick them up.

Indeed, in this class, blocky, square-rigged styling dominates–the subtle curves and gently flared rear fenders of this Armada are genuinely handsome. On this Platinum trim model, 20-inch wheels are standard: this tester wears optional ($2,250) 22-inch dark-chrome rims that add an air of understated elegance. The grille, mirrors, and door handles wear a matching dark chrome as part of the Platinum Reserve package (another $2,250, which includes two-tone leather seating as well) that give a touch of flash without blinding oncoming traffic. It’s not a style that would necessarily be winning concours events in thirty years, but the Armada is still a fetching people-and-stuff carrier.

As noted, the Platinum Reserve package includes the two-tone brown-and charcoal leather seating—a pairing that looks much better than it sounds. The leather is supple, with distinctive stitching setting off the look nicely. While the seat bottoms are rather flat and unsupportive, the seats do give plenty of comfort for a long day of driving—in a vehicle of this size, hip-hugging cushioning for corner carving isn’t particularly necessary.

One minor quibble about the leather interior: the gathered leather on the upper door panels looks rather dated. The ridges and valleys generated by the bunched material was once in vogue—perhaps in the Eighties? It looks like my first attempt at re-covering the vinyl door panels on the MGB dad and I restored when I was a pre-teen. I’d rather see something a bit more understated here.

Moving to the second row of this Armada gives a pair of captain’s chairs, rather than the standard bench seat. The chairs are nearly as comfy as those up front, and are paired with a center console with additional storage room. The captain’s chair/console package runs $450, which seems reasonable if you’ll be using your Armada more as a people hauler versus a truck replacement.

If I were specifying an Armada for my garage, I’d keep the bench seat so I’d have more flexibility in loading stuff. As it sits, loading a sheet of plywood would likely mar that lovely leather armrest, as it sits proud of a folded seatback. The third row is great for tweens or smaller, while adults can fit for a short time. Headroom is restricted a bit, however, so long drives might be less than ideal for a tall crew.

The 8.0-inch color touchscreen for audio and navigation controls works reasonably well, though it is occasionally slow to respond to touch inputs. It seems like the display is a generation behind those in other vehicles: it’s a bit pixelated, where other cars have a higher-resolution display that looks a bit better, especially when shuttling around a map.

The control buttons immediately below the screen are silly. They basically replicate everything that can be done on both the screen and via steering wheel controls. I can see a couple of hot keys to toggle frequently used functions, but having a control knob that does exactly what a touchscreen does within an inch of said screen is rather absurd.

So, ignore that central control knob, and grab the wheel. The steering is light and a little numb, but very precise. Maneuvering through city streets is much less a chore than you’d imagine for a vehicle stretching 208.9 inches stem to stern. The ride is quiet and controlled, with no road noise intrusion. Those 22-inch wheels, which typically would transmit more noise and harshness to the cabin, do nothing of the sort—the ride is simply pleasant.

With 390 horsepower on tap from the 5.6-liter V8—the only engine offered—acceleration is brisk. While the seven-speed automatic is a tad slow to shift, it does so imperceptibly. The Armada is rated to tow 8500 pounds, and I can easily imagine that it will do so without breaking a sweat.

Well, except for fuel bills, that is. While lockdown prevented me from a full fuel economy run, the trip computer leads me to believe the 15 mpg combined EPA rating is spot on. Competitive models from Ford and GM are countering the fuel economy argument with a combination of smaller turbocharged engines, and/or more gears in the transmission to keep the engine turning more slowly. Still, if the economy isn’t a massive concern, there is something incredibly satisfying about the pull of the traditional V8 in the Armada, with a gentle yet guttural roar that can be heard only with windows open.

Unlike competitors, too, Armada has a suite of driver assist technologies standard across the board. Every Armada deploys automatic emergency braking, forward collision warning, blind spot warnings, and lane departure warnings. That’s value you don’t find in competitors until adding extra-cost packages.

How I’d Build It

There’s no question that I’m a cheapskate. While the acres of leather are certainly lovely, I’d rather save a few bucks wherever possible.

Rather than this Platinum Reserve model at $71k, I’d start with the base model SV with 4WD. The full driver assist package is included in the base price, as is the lovely 390-horsepower V8. The SV comes with charcoal cloth seats, rather than leather—I could live with that. I’d add the $1,100 driver package—I could live without the power folding third-row bench seat, but the package includes the tow hitch, trailer brake wiring, and the power liftgate, as well as fog lights and an auto-dimming rear-view mirror. That gives me a big SUV with plenty of towing capability for a delivered price of $51,495, which seems like a lot of value to me.

I was surprised by the Armada. I figured it was yet another bloated, faux-luxury vehicle with no real substance other than sheer mass. While the fuel economy is frightful, and the infotainment is lacking, the Armada does what it needs to do very well. It hauls people and stuff—in equal measure—with aplomb.