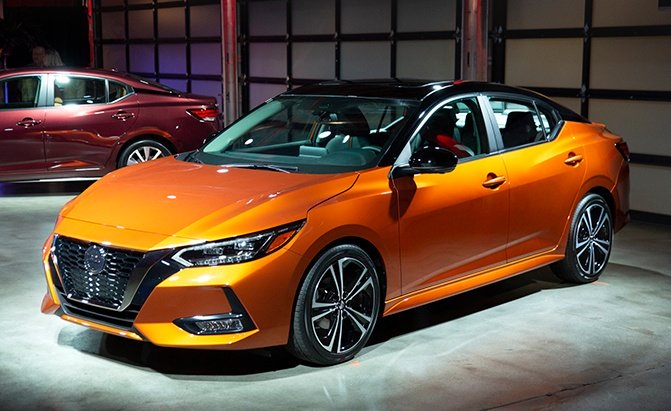 Nissan pre-empted the LA Auto Show opening by revealing the latest evolution of its best-selling American model ever, the 2020 Sentra, Tuesday evening.

It’s a thorough reinvention of the compact sedan, ditching the current car’s bulbous form for honey-I-shrunk-the-Altima sleekness. Riding on a new platform, the eighth-generation Sentra chops two inches off its height and adds it to its width, massively improving its proportions. In come wide LED headlights to accentuate the new car’s width, framing Nissan’s current V-motion grille. Helping lower the visual mass is a new two-tone roof option, which is paired with three of the body colors. Higher trims, like the one shown here, will feature 18-inch wheels.

The new platform brings big changes under the skin too. Out back Nissan has opted for an independent suspension versus the previous torsion beam rear. This, along with a revised (electric-powered) steering rack should make the Sentra a more confident-handling car. For now, the Sentra remains front-wheel drive, not adopting the all-paw option of big brother Altima.

Nissan is dropping a larger 2.0-liter engine into the 2020 Sentra. Compared to the 2019’s 1.8-liter four-cylinder, the new engine pumps out 20% more ponies and 16% more torque, for totals of 149 hp and 146 lb-ft. That’s still at the lower end of the class, with no word on a replacement for the current 1.6-liter turbo. Despite the power increase however, the Japanese company is expecting the Sentra to post better fuel mileage, though official figures will arrive later. A six-speed manual will be available in the base model, with a CVT covering the rest of the range.

It’s inside the 2020 Sentra that arguably even bigger changes are afoot. Nissan has made a conscious effort to move away from the current car’s cheap fleet-car feel, upping interior fit and finish. Quilted part-leather seats are an option—in something other than black no less—using Nissan’s NASA-inspired Zero Gravity tech. Contrast stitching and a flat-bottomed, leather-wrapped steering wheel look good too.

Every 2020 Sentra will come with at least a 7.0-inch infotainment system (8.0-inch on higher trims). The Nissan Safety Shield 360 suite of driver-assist tech will also be standard, which includes automatic emergency braking (with pedestrian recognition), high beam assist and Intelligent Driver Alertness. A different sort of 360—Nissan’s Intelligent Around View Monitor—is available as an option.

The 2020 Nissan Sentra will hit dealer lots starting in January. We’ll have pricing and fuel economy figures closer to that on-sale date—for reference, the 2019 Sentra starts at $17,990 before destination.