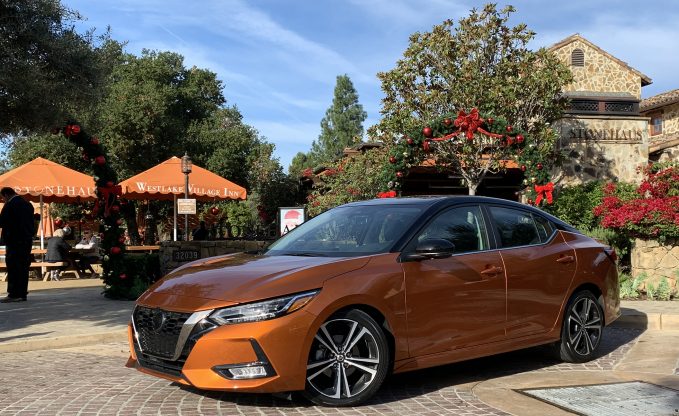 If one were to heed the bleating of certain corner offices and C-suites, it would seem that the compact car culture has been #cancelled, evaporated from the landscape like a fleeting Instagram story or ill-considered tweet. Those suits assert that SUVs and crossover (read: tall wagons) are the Way Forward.

Others, including the people at Nissan, say not so fast. According to them, a not-insignificant number of compact car owners who find themselves left out in the cold it comes time to trade up are not choosing to be talked into a crossover-type car. Rather, those customers are walking out of the showroom and down the road to a dealer who does stock compact sedans. With this 2020 Sentra, Nissan hopes it’ll have propitiated the small car buyer and earn a place on their shopping list.

This nameplate has been around for no fewer than 37 years, stretching back to 1982, a longevity which puts it in august company with segment luminaries like the Civic and Corolla. In fact, Nissan’s sold more than six million of the things. You’ll note the compact cars that have recently vanished went through numerous name changes during that same time frame. There’s a marketing message in there somewhere about brand and name image, by the way.

The new 2020 Sentra is the card Nissan is playing to round out its new four-car sedan lineup. Following a redesigned Versa and Altima, plus a heavily refreshed Maxima, this Sentra adopts many of the styling cues found on those cars. Natty headlights frame a corporate V-Motion grille, a structure which plunges toward the pavement like an eager snowplow. Those sharp creases along the car’s rear three-quarter flanks are bold for a compact car and must have given those tasked with tooling a few sleepless nights.

It’s a handsome car, 2.0 inches lower and 2.2 inches wider than last year’s Sentra, endowed with a snazzy color scheme which includes a contrasting roof option on top-spec models. Interestingly, one of the designers told us that some corners of the company initially did not want to offer a contrasting roof, believing it to be the domain of small crossovers. Take from that what you will but your author is a proponent of visually interesting cars. If you want bland, go order McDonald’s new chicken sandwich.

Visually interesting is one thing: dynamically interesting is another. A new dual-pinion electric power steering system is speed-sensitive, meaning the EPS system is mounted on the steering rack. It’s a setup that works, permitting the Sentra to dig a bit deeper into corners than one might expect from a car in this segment. The accurate steering does a good job of partially atoning for the driveline’s sin of being offered solely with an Xtronic-branded continuously variable transmission in the American market, a ‘box which does its best to put a damper on the fun. It does deploy a roster of Fake News gears but absent of flappy paddles or a shifter gate, it is difficult to access them without simply mashing the accelerator to the floor.

A 2.0-liter inline-four, making 149 horsepower and shared with the Rogue Sport, is par for the course in this segment and provides a 20 percent bump in power compared to the old car. At least it’s good on fuel—Sentra’s on board computer indicated a 33.9mpg average over a day’s driving in and around Malibu. Now that Nissan’s Safety Shield 360 suite of protective features are standard across the board, we did not fear that surfer dude with a head full of zombie suddenly turning left across Highway 1—or Elon Musk wildly exiting Nobu in the Cybertruck. Take your pick.

To the interior, then. Nissan has done a good job of cajoling style and polish out of Sentra’s cabin, with a clean and sensible set of gauges facing the driver and a ventilation panel peppered with nicely trimmed rotating knobs. Your author vastly prefers the trio of round vents in the center stack compared to last year’s twin rectangles. Space between the front seats is opened up by moving the old hand-operated parking brake not to an electric solution but to a decidedly old-fashioned but functional pump-and-dump pedal in the driver’s footwell. Nissan’s well-named Zero Gravity thrones are more than just marketing shtick, offering a let-them-eat-cake seating experience that throws hands at discomfort when it threatens to creep in a few hours into one’s journey.

The snazzy diamond-quilted caramel leather appears only on SV trim equipped with the optional Premium package, though the black cloth found in the blue car shown here is plenty comfortable and seems like it will endure the abuse inflicted on it by a growing family. Base model S cars get a 7.0-inch infotainment screen while SV and SR get an 8.0-incher with CarPlay and Android Auto appearing on the latter. Note to Nissan: we realize you need to occasionally sate the bean counters but for the love of Ghosn please equip all Sentras with the good screen.

Space for front seat occupants is vast, with this 6’6” author having no trouble getting comfortable behind the newly D-shaped steering wheel, a feature which only used to be found in very sporting machinery not too many years ago. Even the presence of an optional moonroof did not cause the headliner to intrude on hat-wearing real estate. Those standing about six feet tall will be able to sit behind themselves in the back seat but if all hands are my size, one should hope their seatmate is not a Close Talker. Truck space is a generous 14.3 cubic feet.

Entry-level models of the Sentra, simply called the S, set an opening bid of $19,090, a sum just $410 dearer than last year’s Xtronic-equipped starter. The now-absent manual transmission car was under eighteen grand, so Sentra’s barrier to entry is a bit higher. However, given the inclusion of more safety kit and more power, the pricing is more than reasonable.

Buying advice? Sample the mid-grade SV, sans the $2460 Premium package, stickered at $20,270. Such a car will provide nissan tires, heated side mirrors, stout cloth seats, the good infotainment system, and a bucketful of USB ports plus keyless ignition. Powertrains are the same across the board, meaning extra cheddar on your five-year note doesn’t get you to soccer practice any more quickly.

Nissan has sold 173,585 Sentras so far this year, beating everything else in the lineup save for Altima and Rogue. With a snazzy new set of duds and snappy interior, the company stands an excellent chance of increasing that number in 2020 by snagging more than a few sedan buyers defecting from car-free brands.