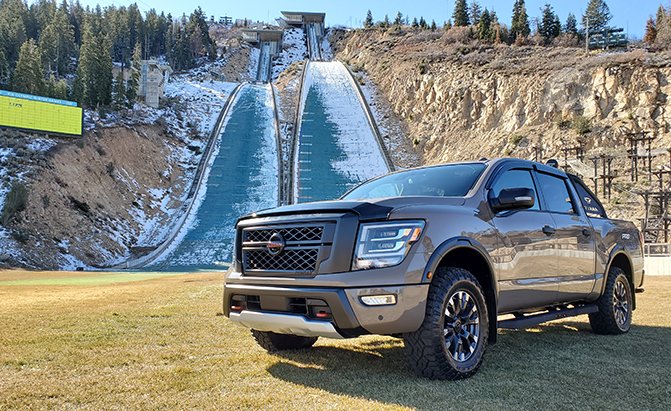 Seems like just yesterday I was driving around in the Arizona desert behind the wheel of Nissan’s then all-new, second-generation full-size Titan pick-up as part of the truck’s media launch.

But it wasn’t yesterday, of course. That first-drive event was in November 2015, and I must admit that I felt a bit of a déjà vu when I arrived in Utah almost exactly four years later to test drive the forthcoming 2020 Titan, a vehicle Nissan has subjected to some serious updating. While it’s technically a mid-cycle refresh, so much has changed with this Titan that it feels like a completely new vehicle.

Out With the Old

The first thing one notices walking up to the new Titan is its new face. While still recognizable as a Titan, the new truck has a bolder, squarer and more high-tech look than its predecessor. The grille is still massive, evoking the “powerful warrior” design of its predecessor, but it now has a more high-tech feel. As other truck manufacturers have done, the new Titan will have different grilles based on model.

Generally, the giant rectangle grille appears slightly more raked than the one on the outgoing truck, and it’s flanked by large LED headlights with distinctive signatures for both the main element and the daytime running lights. The hood, while still vast now has a cleaner, less bulbous look.

Search Nissan Titans for Sale
From the A-pillar back, the new Titan doesn’t appear to be much different from its predecessor, apart from new LED taillights and a tailgate insert that has a big Titan logo stamped into it. Other styling tweaks need a careful eye to spot but will surely be noticeable to Titan owners. These include restyled running boards, along with a new skid plate and tow hooks on PRO 4X models. And, of course, each model also has new wheel designs.

New Stuff on the Inside, Too

The second-gen Titan had a pleasing cabin environment already especially in PRO 4X and Platinum Reserve grades, and that’s even more so with the new truck. What’s more noticeable is how lower grades, such as S and SV also benefit from Nissan’s cabin freshening.

One of the first things that drew my attention, for example, is the new touchscreen display, which comes in either 8.0- or 9.0-inch sizes, depending on grade. These screens are mounted flush into the center stack for a cleaner appearance and have been given a huge graphical boost.

Gone is the graininess and washed-out color palette that older Nissan and Infiniti vehicles suffer from. And, because it’s 2019, these units are loaded with tech, including standard Apple CarPlay and Android Auto integration. NissanConnect Services is also standard kit and offers over-the-air software updates, along with HD Traffic, Google Places / Search, Wi-Fi hotspot (subscription required) and more.

The cabin is also replete with updates to available upholstery options, depending on grade. For example, the leather seating in Platinum Reserve models is now a single color as opposed to two-tone, and the cloth seating options in S, SV and PRO 4X models feature new designs and stitching (PRO 4X). New instrument panel graphics are also on tap as it appears Nissan is finally ready to retire its older typefaces.

Nissan has also addressed cabin noise with the application of standard acoustic laminated glass for the windshield and front side windows. Another big change to note is the availability of a dual-panoramic moonroof, a first-ever feature for the Titan. Nissan claims it’s one of the biggest in the segment and the Titan is the only vehicle in its segment to offer both a roof of this type and overhead assist grips.

The new Titan ushers in a revised powertrain strategy, which means there’s just one that will power all models: the 5.6-liter Endurance V8 (400 hp / 413 lb-ft) paired with a new nine-speed automatic transmission in either two or four-wheel drive formats. The Endurance V8’s numbers, which represent gains of 6 hp and 23 lb-ft over the outgoing engine, are best-in-class for both standard horsepower and standard torque, according to Nissan.

When asked why the 5.0-liter Cummins turbo diesel is being dropped, Rich Miller, Nissan’s Global Program Director for trucks chalked it up to the rising cost of meeting emission standards combined with the reality that gas-powered models far outsell their diesel counterparts.

He went on to say that reallocating money (Nissan spent approximately $230 million on the Titan’s redesign according to company reps) that would have gone towards meeting tightening emission standards for the Cummins freed up more funding for other aspects of the Titan.

At any rate, the new Endurance V8 is an impressive powerplant. In addition to being smooth and refined in regular driving situations (more on that shortly), it’s no slouch when it comes to payload and towing either. In regular Titan form, maximum payload and towing are rated at 1,680 lb and 9,730 lb respectively, while in the larger Titan XD, those figures jump to 2,450 lb / 11,000 lb.

As is the case with the outgoing Titan, the ’20 will be available in two main product lines: Titan and Titan XD. While both trucks will be powered by the same powertrain, the biggest difference between the two is size.

The Titan XD is a fair bit bigger than the Titan—it’s three inches taller, rides on a wheelbase that’s 11.8 inches longer and is 14.6 inches longer overall. Its bed is also a foot longer at a standard 6.5-foot length, while the Titan is available with either a 5.5 or 6.5-foot bed.

In terms of models, Nissan is streamlining the grade walk somewhat. The big change is the removal of single cab models, leaving only King Cab and Crew Cab for the Titan, and only the latter for the Titan XD. The Titan is available in 4×2 and 4×4 models across five grades: S, SV, PRO-4X (4×4 only), SL and Platinum Reserve. The Titan XD also receives five grades, all of which are offered in 4×4 only: S, SV, PRO-4X, SL and Platinum Reserve.

A Capable Performer, On Road and Off

For the drive event, Nissan brought a selection of pre-production Titans (the Titan XD wasn’t available) in SV, PRO-4X and Platinum Reserve trim for about a half-day of driving on roads in and around Park City. The driving consisted of three main sections: on road, towing and off-road.

First up was some on-road driving in a fully kitted-out Deep Pearl Blue Platinum Reserve Crew Cab 4×4 model with a tasteful brown leather interior. Apart from impressive acceleration response, what sticks in my mind about this Titan is the quietness of the cabin. I’ve been in some high-end luxury sedans that aren’t as cocooned as this truck. Now, I wasn’t towing anything, so the engine wasn’t under heavy load, but the serenity of the cabin impresses, nonetheless. Two other facets that really shine are the zero gravity seats which delivery a great deal of support and comfort, and the Fender audio system which sounds simply magnificent.

During the towing exercise, where I drove a white SV King Cab carrying about 4,900 lb (including trailer) of snowmobiles, I took note of how quickly the Endurance V8 passes in the 50–70 mph zone (Nissan says the new Titan is about a second faster here than the outgoing truck), and how stable the truck was on our Interstate route. After putting the truck in tow mode, I didn’t need to adjust the trailer sway control once and the 9-speed automatic didn’t hunt for gears. No drama.

My favorite part of the drive was saved for last: off-road. Behind the wheel of a Baja Storm PRO-4X tester, I ascended about 1,000 feet over a trail of dirt and loose gravel in Utah’s rolling hills. The PRO-4X is, I think, the best-looking Titan and it’s certainly trail-ready.

From its standard electronic locking rear diff, hill descent control and Bilstein shocks, to its front skid plate, lava red tow hooks and 18-inch wheels wrapped in all-terrain tires, the PRO-4X is at its most engaging when the pavement ends. I was a bit disappointed there wasn’t any water crossing, but the PRO-4X conquered the uphill ascent with ease. The Around-View Monitor proved to be quite handy navigating in tight confines over partially blind turns, and the hill descent control made coming down less white-knuckle than it could have been.

The 2020 Nissan Titan should have considerable consumer appeal. While Titan sales are small compared to other players in the segment—particularly Ford, GM and Ram—Nissan has built a truck than can run with any of them.

While the absence of a diesel option and fewer cab configurations will surely turn some truck buyers off, Nissan is wise to focus on consumers seeking a different truck experience. Nissan isn’t likely to load the Titan with incentives to chase the lower end of the market or to boost sales, and it probably won’t be positioned to compete on price alone either.

However, with a wide swath of available trims, in both two and four-wheel drive, along with lots of cutting-edge technology (including standard Nissan Safety Shield 360 on all models), style and performance, the niche Nissan has carved out in the segment should continue to flourish with the new Titan.

Note: Nissan indicated pricing and fuel economy figures will be released near the end of the year. The 2020 Titan goes on sale early next year.