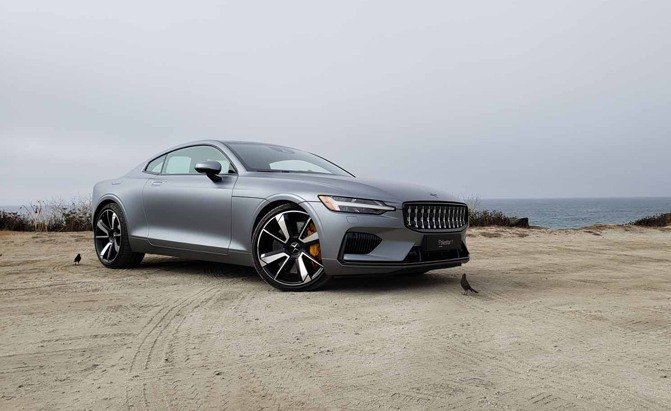 Although the 1 is an extremely comely car, it is also a vaguely disappointing one. The quality of its materials, the ethos of its design, and the nature of its power delivery fail to live up to the promise made by its exterior. And although there’s nothing exactly wrong with the 1, it’s just that there isn’t anything exceedingly special about it either.

What’s wrong with 619 hp total system hp, real torque vectoring, a carbon fiber body, all riding on Ohlins dampers, you ask? Well, those, unfortunately, aren’t all the relevant facts. Facts like the 5,170 lb curb weight take away slightly from the excitement of the carbon fiber body. Although it’s 500 lbs lighter than it would otherwise be thanks to all of that carbon, but it’s less than 900 lbs away from qualifying as a work truck and entitling you to a tax deduction for “heavy vehicles.”

And although, yes, it’s heavy because it’s got batteries down the middle and up behind the rear seats, that doesn’t really entitle it to be as heavy as it is. A four-door Tesla Model S, which is bigger and can carry more people and isn’t made of the latest carbon fiber weighs about 400 lbs less.

How many powertrains power a Polestar?

Really, the weight is a result of the 1’s fantastically complicated powertrain. If you can think of a propulsion system, it’s got it. The left rear wheel is powered by an electric motor. The right rear wheel is powered by its own, entirely different electric motor. The front wheels, a model of cooperation, are powered by a 2.0-liter inline four-cylinder engine, that should be familiar to anyone who’s been in a Volvo in the last 5 years. The engine is turbocharged. The engine is also supercharged. And not only in the Polestar 1 a hybrid, it’s a mild hybrid, too, with a small electric motor helping the engine start and stop in a heartbeat.

As a result of all of these motors, the Polestar 1 also kind of has three transmissions. There’s the 8-speed automatic that sends power from the engine to the front wheels, then each rear wheel has a 1:6 planetary gearset. And it all sits on top of a chassis that was initially designed for use under the XC90. That means that it’s made of steel, with an extra section made of carbon fiber to stiffen things up, because—and I hate to keep bringing up the weight, but—the Polestar 1 weighs a full 800 lbs more than the XC90.

To Polestar’s credit, considering all the enormous complications, the drive is surprisingly competent. It holds the road with shocking persistence. And although you do feel the weight, the plentiful power, the torque vectoring, and the addition of the regenerative braking all help it keep everything in check. But it feels like the best the Polestar 1 can do is fight against the facts of its conception.

The 1 is undeniably quick, hitting 60 mph in 4.2 seconds, but it lacks the initial kick of torque that makes other quick EVs exciting. Meanwhile, you don’t get the persistent acceleration of something powered by a big gas engine. Although it’s quick, it doesn’t feel impress-your-friends quick. And, sure, it’ll run up to 155 mph, but what won’t these days?

To Polestar’s credit, though, they did say it’s supposed to be a Grand Tourer, for luxurious runs down the coast. And on the Pacific Coast Highway outside of San Francisco, it does the GT thing reasonably well. Around the corners, it’s helped by its twin electric motors that are not mechanically linked. That means each rear wheel is powered individually. As a result, the Polestar 1 can feed more power to the outside wheel to help you get around corners faster. That’s as opposed to brake vectoring, which brakes the inside wheel. Essentially, brake vectoring is like sticking your kayak paddle in the water and pushing against the momentum to turn, whereas true vectoring is like paddling on one side.

Still, though the numbers are impressive, the actual experience of them is somewhat lacking. Ahead of our drive, Polestar’s staff told us that Polestar is like Volvo, but without the warmth. It’s cool. Monolithic. And that really sums up the drive well. Although I admire and respect what Polestar’s engineers have achieved, I was at no risk of falling in love with the drive.

As warm as a Swedish winter

Speaking of cold and uninviting, there’s the interior, which may be the single most disappointing part of the car. The first problem is that it’s just a Volvo interior. Yes, there’s carbon fiber everywhere and the logos are different, and Polestar is insistent that it, as a brand, is different, but it’s not different enough. And so what? You may say, Volvo’s interiors are nice. And I agree with you except that 1: that means that your $200,000 GT car has basically the same interior as a $40,000 crossover, and 2: Polestar has done its best to deprive the interior of all the warmth and individuality it had.

I really can’t express it better than the key fob. Whereas the Volvo key fob is covered in soft leather and features exquisite aluminum detailing, the Polestar uses sharp-seemed black plastic. It wants to look monolithic, but instead is looks cheap. That’s a theme that follows into the rest of the interior. Whereas the interior on a wood-lined, tartan-upholstered, creamy-leathered Volvo V60 is like a beautiful piece of Scandinavian furniture—all simplicity and taste—the carbon-fibered, emo-black, Teutonic interior of the Polestar 1 is more like an Ingmar Bergman film. And although Bergman’s films did occasionally take place on the coasts of Europe, they were the wrong European coasts for a GT car.

And then there’s the little stuff

While the interior may be some peoples’ tastes, I haven’t even mentioned all the other little cheapnesses that chipped away at the quality of my experience with the Polestar 1. There’s the fact that the sun shades feel cheap and can’t be swung to the side window. There’s the tiny trunk with no actual latch, the Sensus infotainment system (which isn’t very good even at the best of times) and the utterly forgettable black leather bag that contains all of the charging gubbins. None of it is quite right and it all makes you wonder if they spent a little too long making all of the various means propulsion work and not quite enough time sanding off the rough edges.

That said, it’s in your best interest to remember that grand tourers seldom review well. And with a total range of 540 miles (870 km) of total range (you get 70 miles [112 km] of pure electric range, after which time 16 gallons of gas take will get you home on the 326 hp I4, though the car will mix it up in hybrid mode), looks to kill for, and enough performance to flatter even the most untalented driver, it may just be that the 1 lacks the glaringly obvious killer app that makes it easy to review.

It is a spectacularly attractive car. I spent two days in or around the Polestar and caught literally dozens of people gawking at it. One Tesla driver spent the better part of ten minutes matching my speed to take pictures of the 1 as I drove it down the highway. It looks special. And with just 500 per year being built and just 150 of those heading to the US (30 to Canada), it will continue to be special every time other people see it.

I’m not just saying that to pull punches. I really do believe that the Polestar lacks the excitement to be a driver’s car and the finish to be a luxury car. And according to my simple math (luxury + sportiness = grand tourer) that means it doesn’t quite live up to expectations. But as with every simple formula, I understand that there are elements of life (the desire to be admired, aesthetic ambition, the reality of driving long distances) that aren’t quite represented in my numbers. So here’s what I’ll say: The Polestar 1 isn’t a failure, but it isn’t exactly a success, either.

[update: a previous version of this article mentioned that the front seats were slow to slide forward. Polestar has since gotten in touch to tell us that the final production version’s seats will slide forward faster.]