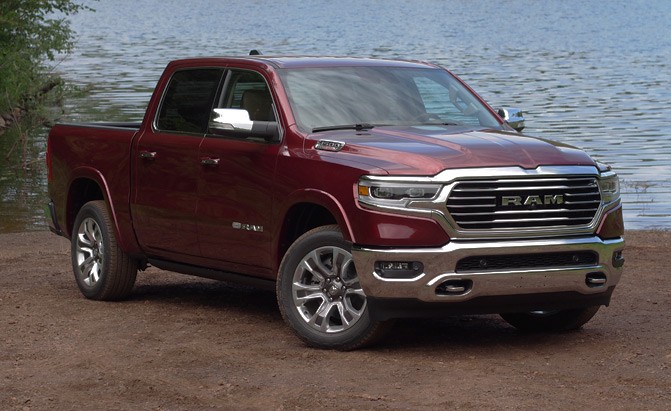 Diesel power is back at Ram!

Yes, I know, technically it never disappeared. The mighty Cummins straight-six is still a mainstay of the brand’s heavy-duty pickups, as it has been for decades. But pedantic caveats aside, if you’ve lusted after the impressive fuel efficiency and stump-pulling torque delivered by compression ignition, you’ll soon be able to get a V6 EcoDiesel in the latest-generation Ram 1500, the company’s increasingly popular half-ton model.

Boasting numerous improvements over its predecessor, this engine provides an extra helping of both horsepower and torque, is smoother, quieter, and should be more economical to operate. Extensive changes to internal and external components deliver these laudable enhancements, which conspire to make it an even more appealing choice.

For this review, the powerplant in question was bolted between the front fenders of a crew cab Laramie Longhorn 4×4. This is basically the second-fanciest model in the Ram 1500 range. Despite the abundance of features, interior space and, ostensibly, weight, this rig still performed admirably in normal driving and even while towing.

But before diving into how this truck runs, let’s take a peek under the hood. Numerous refinements have been made to FCA’s EcoDiesel V6 for 2020. Even though this powerplant is now in its third generation, many fundamentals remain the same.

Starting with a few similarities, it’s a 3.0-liter V6, just like before. Chain-driven dual overhead camshafts operate four valves per cylinder via friction-reducing roller-finger followers. Once again, the block is cast of compacted graphite iron for incredible strength and reduced NVH, that’s noise, vibration and harshness. Within this foundation spins a forged crankshaft to which are attached forged connecting rods.

Filling this engine’s half-a-dozen bores are completely redesigned aluminum pistons. They’re fitted with thinner rings for decreased friction. The wrist pins have also been offset three-tenths of a millimeter from centerline to further cut noise. Special coatings on both the piston skirts and pins further reduce parasitic losses.

Forcing air into this bent-six is a new water-cooled, variable-geometry-turbine turbocharger, which is mounted at the back of the engine, kind of above the bellhousing area. This newly designed blower should enhance both efficiency and responsiveness.

Reworked intake ports promote more swirl in the combustion chambers and flow more air to boot. Improving efficiency, the compression ratio has been increased modestly, from 16-to-1 to 16.5-to-1. As for fuel delivery, the system has also been upgraded. It operates at 2,000 bar, that’s 29,000 PSI.

But what’s the result of all these changes? Well, the EcoDiesel now gives you the most torque in the half-ton diesel segment, up to 480 pound-feet at 1,600 RPM, more than F-150 or Silverado and an increase of 14 percent compared to its predecessor. Horsepower measures 260 at 3,600 revs, 8 percent more than before, a total that’s slightly less than the Chevy’s best. Here’s a quick specs-sheet showdown comparing the Detroit Three’s light-duty diesel pickups.

Matching its best-in-class torque is segment-leading capability. Properly equipped EcoDiesel-powered Ram 1500s can tow up to 12,560 pounds. As for hauling, the truck’s maximum payload rating is 2,040 pounds.

Ram has made a name for itself in recent years by offering the best interiors in the truck business. Whether you get an entry-level Tradesman model or swing for the fences and grab a range-topping Limited version, each step up the trim ladder comes with a nicer cabin than what’s available in comparable rigs built by rival automakers. Given the elegance of today’s Ram trucks, a bone-shaking, oil-burning engine simply wouldn’t cut it.

Fortunately, the EcoDiesel is a paragon of refinement. Long gone are the days when diesel engines discharged enormous plumes of tar-black smoke and clattered like a can of gravel in a paint mixer. This V6 operates in near silence and produces scarcely any vibration.

Given its perfect internal balance, the Duramax inline-six offered in Chevrolet’s Silverado 1500 is a tiny bit smoother than the EcoDiesel. Ram’s engine emits an infinitesimal wisp of buzziness that can be felt in the floor at certain engine speeds, but still, this is nearly immaterial. This engine is so smooth most drivers would probably have no idea it’s a diesel unless you told them, or, of course, they read the badges on the outside.

As for performance, like most diesels this one takes a second or two to catch its breath when you nail the accelerator from a standstill. But once you get about 2,500 revs on the clock the truck pulls smartly, winding out to about 4,300 rpm before the transmission grabs the next gear. Ram’s reliably competent eight-speed automatic shifts quickly and without drama.

Demonstrating the EcoDiesel’s towing prowess, Ram had a couple of trucks hooked to trailers so we could experience this firsthand. One of them was loaded with a pair of ATVs and weighed a claimed 5,150 pounds.

With more two-and-a-half tons in tow, the EcoDiesel was largely unphased. Acceleration was more than adequate, with the truck putting its shoulder to the load and pulling like a team of oxen, even up moderate grades. Equipped with the optional air suspension system, the pickup proved to be a supremely stable and confidence-inspiring tow rig. Never did it feel like the trailer was trying to drive the truck. The tail never wagged the dog. It was smooth and planted at all times.

Fuel-economy numbers for the 2020 Ram 1500 EcoDiesel have not been finalized yet, but I’d imagine the truck will deliver at least 30 miles per gallon on the highway in its most efficient form. I mean, it pretty much has to. The F-150 gives you that, and the newest light-duty Silverado was just rated at a damn-impressive 33 mpg, a figure that will be tough for Ram to beat. But no matter what the official consumption figures end up being, this truck is practically guaranteed to be remarkably economical in real-world use. Without even trying, in my hands the trip computer registered an average of around 28 miles per gallon.

Now that EcoDiesel is joining the lineup, Ram offers a broad selection of engines in its half-ton truck. You can get a base Pentastar V6 fitted with FCA’s innovative eTorque mild-hybrid system, you can opt for a classic 5.7-liter Hemi and you can even get that V8 with eTorque. Of this bunch, I think the Hemi is still my favorite thanks to its rumbling exhaust note, but it’s impossible to argue with the EcoDiesel’s punch and striking efficiency.

So, how much does this fancy compression-ignition engine cost? Well, it ain’t cheap, but neither is it a total budget buster.

The EcoDiesel is a $4,995 option or $3,000 more on trucks fitted with an eTorque-ified Hemi. On Tradesman, Big Horn/Lone Star, Rebel, and Laramie base models it’s a $3,300 upcharge. Interestingly, this engine will be offered across the range on every version of the Ram 1500, including the off-road-focused Rebel model, which is a first, and something that will likely be welcomed by enthusiasts.

The most affordable version of this 2020 model-year truck fitted with a diesel V6 is a Tradesman trim, quad-cab, rear-wheel drive example. One of these should set you back about $38,585, including $1,695 in destination fees.

The crew-cab, Longhorn, 4×4 model tested here checked out at an estimated $67,000. But more value-conscious shoppers can pick up a diesel-powered Ram 1500 Classic, the affordably priced previous-generation truck that’s still on sale. They can be had with a gen-2 EcoDiesel V6. They’re not quite as powerful or advanced, but they should still be an excellent buy.

With impressive refinement, efficiency and reasonably affordably pricing, there’s no reason not to buy the Ram 1500 EcoDiesel, especially when you consider this truck’s class-leading interior, excellent capability, and near-luxury refinement. Look for diesel-powered 2020 Ram 1500 pickups at dealerships in the fourth quarter of the year.

Discuss this story on our Ram Trucks Forum