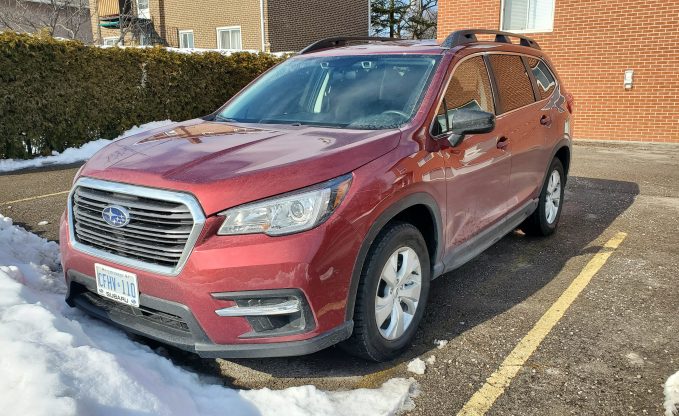 While success is never guaranteed in the car industry, launching an SUV in North America these days comes pretty darn close. At the risk of oversimplification, a carmaker needs only roll the thing out and then sit back and watch buyers flock to dealerships to hand over their money. I realize it’s not quite that simple, but it sure seems like it sometimes. Take, for example, the fast rise of the Subaru Ascent. First shown as the VIZIV-7 concept in 2016, the Ascent went on sale midway through 2018. By the end of 2019, it had sold 81,958 units, good for a 126 percent year over year increase.

In short, the three-row, eight-seater is a smash hit for Subaru and I recently spent a few days driving one to learn more.

Before I get into the review, a couple of disclaimers. First, most photos I took of the Ascent got corrupted which has rendered them unusable. As a result, I’ve mixed in a few press photos from Subaru to backfill, primarily interior shots, so be advised that they are not exactly like the vehicle I drove. The shots I’ve picked are close to what I experienced, however. Secondly, the crimson red pearl is offered on the base Ascent in Canada, but not in the U.S.

As mentioned, the Ascent began as the VIZIV-7 concept. Showcased first at the Los Angeles Auto Show in 2016, it was always destined for production. An Ascent Concept followed at the New York Auto Show in 2017 where Subaru confirmed that production would start in 2018.

Just like the newer Subarus, the company’s Global platform underpins the Ascent as well. Subaru offers the Ascent with a single powertrain comprising a 2.4-liter dual-overhead cam turbocharged Boxer 4-cylinder engine. It is paired to a continuously variable transmission (CVT) and produces 260 horsepower at 5,600 rpm and 277 lb-ft. at 4,800 rpm. For the U.S. market, the Ascent is available in four grades: Ascent, Premium, Limited, and Touring.

Base But Not Basic

I spent five days driving a base Ascent finished in crimson red pearl with a slate black cloth interior. My tester retails for $31,995 and is equipped with no extras. Despite that, the list of standard equipment is respectable. The standard feature list includes Symmetrical All-Wheel Drive with X-MODE. and Eye-Sight Driver Assist Technology. The base model also gets Subaru Starlink Multimedia with Apple CarPlay and Android Auto, 18-inch alloy wheels and Rear-seat Reminder System.

A Bit Of Vanilla

In the looks department, the Ascent is a handsome, if rather vanilla interpretation of the mid-size SUV. Unlike the old B9 Tribeca of the mid-2000s, Subaru plays it safe with the Ascent. It has a blandly inoffensive appearance that features a large hexagonal grille and wedge LED headlights (halogen on my base model, but with LED daytime runners). A raked windshield and a rising beltline pinch the rearmost windows. Basically, it’s a contemporary SUV design. Nothing more, nothing less. Incidentally, the 18-inch wheels look tiny on the Ascent, especially when wrapped in winter tires like my test vehicle.

The Ascent’s interior is spacious and comfortable despite being light on content. In addition to cloth seats, my tester also has a plastic composite steering wheel and gear shift knob, along with harder stuff in the dashboard and door panels. For the first time in a while, I also had to make do with an actual key – inserting it into the ignition cylinder is a rare occurrence these days.

Although its cabin is quite spartan, the seats are very comfortable. It also gets a useable 6.5-inch multimedia touchscreen display with satellite radio and easy Bluetooth pairing for your Android or iOS devices. Embedded navigation however is not available on this model. The switch and gauge layouts are clean, straightforward and easy to use.

The Ascent also really shines on the passenger / cargo front. The second and third rows offer 60/40 split bench seating which provides multiple options for carrying both passengers and cargo. In terms of space, the Ascent offers an impressive 153.5 cubic feet (4,347 litres) of total passenger volume and 86.5 cubic feet of cargo space behind the first row.

While the Ascent may look ordinary, its looks belie its performance character. It offers a smooth and composed ride and good performance from the 2.4-liter turbo Boxer engine. This powerplant offers snappy acceleration off the line and through the mid-range. The peak output though is socked away in the upper reaches of the power band.

The Boxer is a willing engine, that feels somewhat constrained by a CVT that disappoints. Shifting is vague, it rubberbands often unless the throttle is mashed and it emits a clearly audible whine, especially at lower speeds. The noise is less noticeable at highway speeds but is frustratingly present everywhere else.

On a more positive note, the Ascent comes loaded with a lot of standard stability and handling technology. This includes hill descent control, vehicle dynamics control, active torque vectoring and Subaru’s X-MODE. A lack of snow prevented a good evaluation of these technologies, particularly X-MODE.

The Ascent has a tow rating of 2,000 lb. but it jumps up to 5,000 lb. on models above the base grade. As for fuel economy, the Ascent’s 22 mpg combined figure is respectable given its size. I average 21 miles during a week of mixed city and highway driving.

Although its standard features don’t overwhelm, the Subaru Ascent offers decent value in a very competitive mid-size SUV segment. With seating for up to eight, the power of a V6, plus standard equipment that includes Subaru’s well-regarded AWD system, X-MODE, and EyeSight driver assist technology, and the Ascent is at least competitive with competitors in the segment. Plus, it undercuts its chief rivals, including the Toyota Highlander ($34,600 base) and Mazda CX-9 ($33,890 base). This augers well for its future as a volume seller.

The gripes I’ve listed above aren’t dealbreakers – styling preferences are subjective and more interior content is available further up the grade walk. Even the CVT drone, while annoying, is something one could become used to over time.

Overall, the Ascent is a big win for Subaru, and its success is further evidence that America’s appetite for SUVs remains as ravenous as ever.