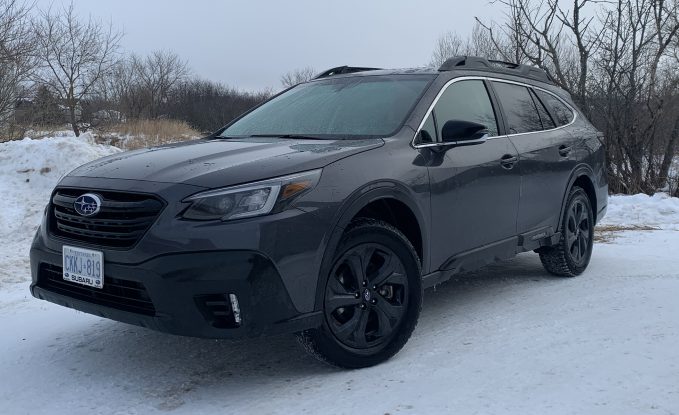 There was a time when nobody could out-weird Subaru. It was long the go-to brand for granola types seeking a rig with power always going to all four wheels. In fact, if you wanted an all-wheel-drive coupe with bizarre windows or a station wagon with most of its roof lopped off, Subaru was the only game in town. The Subaru Outback, despite being a more conventional vehicle was the only vehicle of its kind, a wagon that could handle the rough stuff throwing no tantrums.

Lately, however, through a dose of sensible styling decisions and a raft of new products, it has been broadening its appeal. Sales years on both sides of the Canada/America border reaffirm that Subaru is stocking what customers crave – SUVs and crossovers. Still, with the expectations of car shoppers currently set in the stratosphere, sales success does not magically appear without a solid and well-thought-out product. For 2020, Ebisu engineers have given their tall wagon a rethink.

This is the sixth-gen Outback. The nameplate first appeared as a trim level on the brand’s Legacy wagon about twenty-five years ago. Subaru recognized much earlier that customers desired higher riding wagons and SUVs (the term crossover wasn’t in wide use then). Splitting it off into its own model proved to be a wise move., it has consistently been one of Subaru’s most popular models.

For 2020, Subaru offers the Outback with two different engines. A naturally aspirated 2.5L four-banger if offered as standard. It makes 182 hp and 176lb.-ft of torque. The XT trim that we have here is powered by a turbocharged mill displacing 2.4L and making a heady 260 hp and 277lb.-ft of torque. The latter feels lively around town thanks to the torque that’s available from 2000rpm or just barely past idle.

In fact, that engine speed might be below idle, if our test car is any indication. Early morning startups during frigid January temperatures consistently evoked a faster idle in the neighborhood of 1750rpm. It was far above what one would expect when setting modern internal combustion alight. The engine would simmer down below 1000rpm after a minute or five, depending on just how far the mercury had fallen. A quick inquiry suggested this to be normal behavior. A part of the car’s effort to warm up various emission tools. It’s not a deal-breaker but may surprise customers new to the brand.

A continuously variable transmission is the sole gearbox available which comes with an octet of ‘Fake News’ gears. And a set of flappy paddles behind the steering wheel. It is functional if otherwise a joyless item. It can be flatfooted when asked for sudden passing grunt after cruising at highway speeds for a spell. Its first concern is fuel economy, not fun.

Our test car was an Outdoor XT model, the least expensive of three Outback models in the land of the Maple leaf. If you’re in the United States however, the Onyx XT trim is the closest allegory to the Outdoor XT you see here. Subaru does a bang-up job to furnish all its Outbacks with advanced safety equipment. All trims come standard with its nifty EyeSight suite of driving aids. It includes the likes of pre-collision braking, adaptive cruise control, and lane-keeping, this is one family wagon that pledges to look after both the driver and their family.

All-wheel drive is, of course, Subaru’s raison d’etre. This time around, Pleiades engineers have endowed the Outback with a system called X-Mode, a piece of kit that sounds like something Wolverine would deploy. But it actually permits the driver to select from a trio of modes which best fit the road conditions. Simply leaving the all-wheel-drive system to do its thing will work fine for the vast majority of owners.

Hard-pressed to tell the difference between 2019 and 2020 Outback? One look at the interior will instantly tell you where the design team spent its budget. Dominating the center stack is a Tesla-esque 11.6-inch tablet-style infotainment system with a high-resolution touchscreen and all manner of virtual controls. In fact, you can operate most daily functions through the screen. A decision that makes its good graphics and decent response times even more important. Redundant buttons exist for volume/tuning and temperature control; one for the ventilation fan would be welcome as well.

One oddity with this ginormous screen is how it displays Apple CarPlay. Keep in mind that screens are measured on the diagonal plane and not actual width. It would seem that Subaru’s display is a mite too small for Cupertino. When projected, CarPlay should populate with big Day-Glo icons the size of ravioli, not chicklets. The resultant fractious image is like when you plug your laptop into an overhead projector but the last person to use it messed up the resolution settings. A rethink or reprogramming here would be tremendous.

The rest of the interior harbors no such complaints. There is plenty of space available for all hands both front and rear. The cargo area abounds with smart and thoughtful touches. It features conveniently placed handles with which to fold the rear seats and a pair of handy storage cubbies. Up front, a storage ledge directly ahead of the passenger is a great place on which to lodge a smartphone. It can, however, be infinitely more useful if it housed a wireless charging pad, a feature not found on any Outback at any price.

A few callbacks to Subaru’s weird-old days remain. The location of a few secondary controls and the dashboard’s propensity to dispense odd information (“Sarah’s birthday today”, it once exhorted). Combined with the car’s inherent practicality and mountain goat ability in a Canadian snowstorm, it’s easy to see why Subaru sales numbers continue to climb.

Despite shedding some of its trademark quirkiness, the Subaru Outback should remain high on the list of anyone looking to buy a wagon-like vehicle with all-wheel drive. Sure, the marketing mavens in Ebisu will tell you this thing is a crossover or SUV – and it will surely be counted as an entrant in those segments – but the Outback’s roots run deep into the Legacy sedan. This is as it should be, given the nameplate’s origins.

The absent features – wireless charging and remote start integrated into the keyfob – are hardly deal-breakers and are more than balanced out by the mountain goat-like all-wheel-drive grip and jumbotron infotainment system. Some quirks do remain (do we really need a graphic of the car illuminating its brake lights every time we slow for a roundabout?) and can be viewed as slight nods to those in the know. Everyone else will simply see a comfortable and capable turbocharged all-wheel-drive wagon.