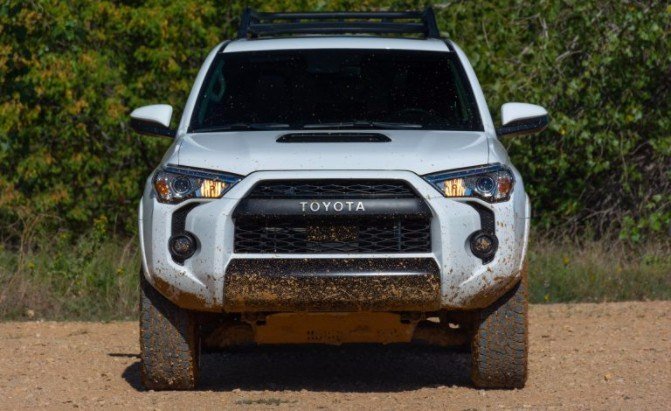 It seems that I’ve gone soft as I’ve aged. And, as it turns out, so have most things that resemble sports-utility vehicles.

As my fortieth year has come and gone, I’m realizing that I appreciate a little bit of extra plushness in what I drive. Taut handling can be trumped by a more relaxed highway ride. I guess that means I’ve become a crossover.

But I rage against the dying of the light at times. I keep threatening to pull my long-neglected roadster out of hibernation. I look at myself in the mirror and think about going for a run. I can picture myself not as a flabby soft-roader, but as a legitimately fun vehicle built to do more than commute. In my minds’ eye, I’m a 2020 Toyota 4Runner TRD Pro. I may be a bit old, I might not be the best behaved in polite (highway) company, but I want to go out and play.

The 4Runner TRD Pro is happiest when off the beaten path, that’s for certain. Toyota brought journalists to an off-road park in Texas to take their dirt-focused trucks beyond what most of us will see during a typical road test.

But first, we had to get there, which meant about an hour of driving in morning traffic and on some higher-speed four lane highways. Here, the chunky tires and stiff springing of this off-road focused sports-utility feel a bit out of place. The steering is at once vague and nervous – there is a vibration that works through the suspension to the steering wheel that is always present at highway speeds, and the truck does seem to wander a bit within the lane.

Further, the brake pedal has an incredibly long travel, with a very soft feel that is unlike most cars I’ve ever driven. It’s not dangerous by any means – goodness knows that I see plenty of people commuting in spotless 4Runners every day – but it feels less than connected to the road.

But as we arrive at the off-road park, the 4Runner TRD Pro is right at home. That steering, nervous and loose on the tarmac, keeps the wheel from jerking out of the hand when driving entirely too fast for the conditions. That long, soft pedal allows for effortless brake modulation when figuring the best path over the rocks and other obstacles nature has put in the way.

Of course, engaging the hill descent control – simply called Crawl Control here from Toyota – allows you to keep feet off of the pedals. In low range 4WD, press the crawl button and turn the knob to select an appropriate speed for the terrain, up or down hills, and the system works as a low-speed cruise control to modulate the brakes and throttle. It feels incredibly odd to not use the feet when negotiating a boulder-strewn hill, but concentrating on placing the front tires in the right place can be taxing enough. This inexperienced off-roader welcomes the assist.

Plenty of power roars from the four-liter twin-cam V6, with 270 hp and 278 lb-ft of torque making short work of all but the worst grades. And a healthy roar it is, as this TRD Pro trim adds a throatier exhaust system from the catalytic converters back to the bumper. It’s a lovely sound when accelerating, but it does drone on the highway a bit more than the standard exhaust.

Once again, you’re buying this for the trails, not the road.

The five-speed automatic transmission is a letdown in this age of eight, nine, and ten-speed ‘boxes, as the wide spacing between gears means rapid acceleration needs plenty of revs and a healthy drop in RPM when switching cogs. The transmission does shift remarkably smoothly, however.

The interior hasn’t changed all that much over the years – it’s still a rugged, hard-plastic washed cabin that will wear forever. Toyota has mercifully added Android Auto, Amazon Alexa, and Apple CarPlay to the center cluster for the 2020 model year. Further, USB ports have been added to the rear seats, because goodness knows the kids never remember to charge their phones or their tablets before setting out on the road. Or is that just my kids?

Toyota has further added their TSS-P package of safety features to all 4Runners for 2020. TSS-P is short for Toyota Safety Sense, and in the 4Runner includes a pre-collision system with pedestrian detection, automatic high-beams, lane departure warning, and high-speed radar cruise control.

Higher trims, including this TRD Pro, the TRD Off-Road, and the SR5 Premium, also gain a standard smart key with push button start. This feature alone, while seeming rather frivolous, is enough for me to buy a higher trim package. The convenience of walking to the car, keys in pocket only to open the car with just a touch on the door, is hard to overstate. Imagine wrestling with a toddler in your arms, and you’ll appreciate this simple luxury.

As I noted recently when I tested the new Tacoma TRD Pro, Toyota is offering a TRD Pro exclusive Army Green color here as well. I’m in love!

The 2020 Toyota 4Runner is not for everyone. It’s not the most pleasant SUV to daily drive, despite the fact that Toyota added a slew up tech and safety upgrades for 2020 to help modernize it a bit.

Still, if you feel younger than you are, and spend much of your life outdoors, this is the truck to take you there.