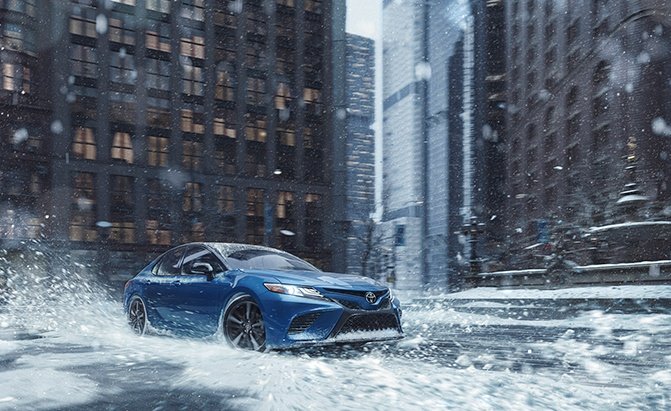 The last time the Camry sent power to the rear axle,  was a new release, way back in 1991. Now, almost 30 years later, the proliferation of crossovers has increased demand for the option. What’s more, the full-size Avalon will also gain an AWD option next year.

Toyota has announced all-wheel drive will be a standalone option on the mid-size Camry starting early spring 2020. It will be available on most trims, paired with the 2.5-liter four cylinder engine for maximum efficiency. The four-pot is good for 202 hp, or 205 hp in XSE trim, thanks to the dual-exhaust setup. The only exterior tell on both Camry and Avalon will be a small “AWD” badge on the trunk.

The Camry shares its TNGA architecture with the RAV4 crossover. That connection made it easier for Toyota to produce the AWD Camry, which wasn’t originally part of the product plan. The engineering team fit the RAV4’s engine, transmission, transfer case and rear differential in the Camry and Avalon with zero change to the passenger or storage space. That’s despite the need for a new gas tank and some floor structure changes. The cars also borrow the crossover’s multi-link rear suspension, and the prop shaft from the upcoming, fourth-gen Highlander.

Like the RAV4, the Camry and Avalon can disengage drive to the rear axle when four-corner traction isn’t needed, such as on highways. When the system detects slip the rear wheels are back in play. The AWD Camry and Avalon will be able to send up to 50% of their power to the rear end.

Typically AWD adds weight to any car. The Camry doesn’t avoid this, being 165 lb chonkier than front-drive versions. The Avalon is a different story: Toyota simply says its curb weight is “similar to that of its FWD V6 siblings.”

All-wheel-drive has slowly crept its way into the Camry’s class. The Subaru Legacy has always had it as standard, sure, but Nissan fired the next shot by adding it to the Altima for 2019.

The Camry AWD will hit dealers early spring 2020, in LE, XLE, SE and XSE guises, with an optional cold-weather package. The Avalon AWD shows up next autumn in XLE and Limited trims, adding a standard heated steering wheel over the two-wheel drive models. Expect exact pricing details closer to release.