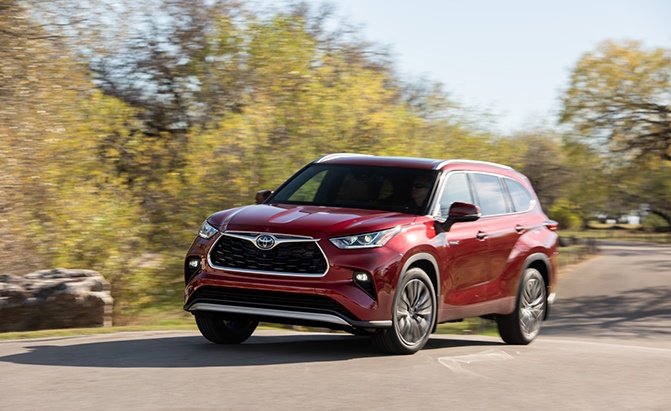 It may not look it, with its quietly confident new looks, but the 2020 Toyota Highlander is a fierce fighter.

The battleground: the three-row crossover market. It’s a bloody battle royale, with two dozen competitors all vying for customer dollars. The current Highlander has been fighting with essentially the same tools since 2014, and yet it still set a new sales record in 2018, shifting over 244,000 examples. It sits atop the pile, accounting for around nine percent of the market all on its own.

In other words, this fourth-generation model has big shoes to fill, to say nothing of the tougher competition that’s launched in recent years like the Subaru Ascent and Volkswagen Atlas. The crossover gravy train shows no sign of slowing, so can the Highlander maintain its position as the conductor? We recently sampled most of the new range down in San Antonio to find out.

As we pull up to base camp, two new-shape Highlanders greet us at the door. They’re immediately recognizable as such, feeling almost too similar to what’s come before, at least at first. It’s only once we’re on the road to nearby Gruene and pass a gaggle of existing models that the differences become more apparent.

The 2020 Highlander now stretches 194.9 inches, up 2.4 over the previous model. All of that has gone into the wheelbase, now 112.2 inches, offering up more interior room. Gone is the Gillette Mach 5 grille, giving the Highlander a classier, more chiselled visage. The thinner LED headlights help too, framing a chrome-winged Toyota badge. At 68.1 inches tall it’s the same height as before, but blacked-out A-pillars pull visual weight out of the top of the rig, paired with the strong character line that runs from the bottom of the front doors up and over the rear wheels.

It’s the latter element that deputy chief engineer Yoshinori Futonagane is most proud of his team for pulling off. “If I had to choose, it’s the really solid looking rear fender flare, how it connects straight into the taillights,” Futonagane told us via translator. “The reason is that this time, the biggest thing we wanted to address was the sitting stance of the vehicle, but we wanted to have it be sophisticated at the same time. It was really difficult, but we were able to get both of those in the same design language.”

Toyota’s cleaned up the tail with slimline lighting units and a pert lower bumper. It thankfully hasn’t sacrificed utility for style either, with the tailgate lift-over height remaining low.

What you’re looking at here is something Toyota calls “Glazed Caramel”. Yes, we told any rep who would listen that it needs to show up elsewhere in the Toyota lineup.

Buyers will need to pony up for the top Platinum trim to gain access to this sweet shade, however. The high-zoot range topper certainly nails Futonagane-san’s target of a premium feel, with a tasteful three-tone treatment on the dash and just a bit of wood. It feels good to touch too, outside of the fiddly buttons below the large 12.3-inch infotainment screen. A trick dual-level lid on the center console allows you to wirelessly charge your phone while still accessing the main storage space, if needed. Meanwhile the two storage cubbies built into the dash should prove practical in day-to-day use. Just don’t put anything in there that’ll muck up the caramel…

The front seats are supremely comfortable, and their highest heating setting takes the sting out of a rainy highway schlep in the morning. The second row ain’t too shabby either, with standard captain’s chairs in the XLE, Limited and Platinum. They’re not as heavily bolstered as the perches up front, but they are heated, which should please friends and family alike. There’s an additional inch of movement fore and aft here, which could conceivably make the third row more accommodating. That one’s still best for short trips or short people however. Compounding the feeling of claustrophobia back there in the Platinum is the standard panoramic moonroof, which stops just shy of the third row.

Luggage space sits at 16.0 cubic feet with all seats in their upright positions. Drop the rear-most row and that expands to 48.4 cu ft; fold all but the fronts for a grand total of 84.3.

Getting a Baseline Reading

Much to our surprise, Toyota announces it’s brought along a base model. Well, not exactly a base: it’s the lowest L trim, but this Highlander comes with optional all-wheel drive.

In full-on Uber spec, the Highlander L naturally misses out on the gadgets and soft leather, but it doesn’t feel like a penalty box. The infotainment screen is still a solid 8.0 inches, and still offers Android Auto, Apple CarPlay, and Alexa compatibility. Also standard across the board: three-zone automatic climate control, stop-start, keyless entry, an intercom system, plus LED head- and taillights.

The grey cloth interior in our tester lacks the wow factor of glazed caramel, but remains comfortable on the road. Its eight-seat layout is standard, as well as on the LE. Moving up to that trim adds blind spot monitoring, a power liftgate, LED fog lamps, and leather-wrapped wheel and shifter.

Toyota has dropped the unloved 2.7-liter four-cylinder Highlander for the 2020 model, meaning V6 power is now standard. There is a four-cylinder—a 2.5-liter—though it’s now shacked up with a refreshed version of Toyota’s hybrid setup, available on all trims bar the L. Opting for the six-pot nets 295 hp and 263 lb-ft, with an eight-speed automatic. It’s as smooth and agreeable here as it is everywhere else in the Toyota lineup, proving a perfectly serviceable partner for cruising or passing. No matter the trim or the engine, buyers will have the choice of either front- or all-wheel drive.

Like its little brother the RAV4, the Highlander’s more compelling underhood option is the hybrid. Net horsepower here is 243, but the numbers only tell part of the story. Toyota doesn’t quote a torque figure, but two electric motors work alongside the ICE to fill out the lower rev range. On the butt dyno there’s little between the two engine options during everyday use, even with the hybrid’s CVT. That the hybrid boasts 50 percent better gas mileage is the icing on the cake, with a combined 36 mpg trouncing 24. The Highlander may not have to stop on the way to the grandparents; the kids will be another story.

The newer, lighter TNGA-K platform adds a dose of refinement. Road noise is minimal, and only the harshest of bumps transmit their nastiness to us during our drive. The Highlander rides with the sort of loose-limbed damping that neither implies sportiness nor sloppiness. Comfort is the name of the game, a mission statement that applies to the steering too. It goes where you tell it with minimal fuss, and that’s about it. Don’t let the hybrid’s drive mode selector fool you: sport mode turns the dials red and ramps up throttle tip-in, but the driver’s choice in the segment remains the Mazda CX-9.

The 2020 Toyota Highlander is one of those rolling Venn diagrams of a car. The team behind it has relentlessly researched the needs of the people that shop in the segment, gifting them the efficient family hauler they didn’t know they wanted. Sales numbers don’t lie.

The fourth-gen model is a steady evolution of that. The simplified model lineup, with a mix-and-match approach to its engine and drivetrain options, means buyers can get the exact package they need. Our pick? It’d be a front-drive hybrid XLE, with the AWD model for particularly snowy locales. Unless your particular set of circles includes the 5000 lb towing rating of the V6, the $41,000 (before destination) hybrid XLE FWD offers the best bang for your buck.

Will it retain its title as class sales champ? We wouldn’t bet against it: after all, there can be only one.