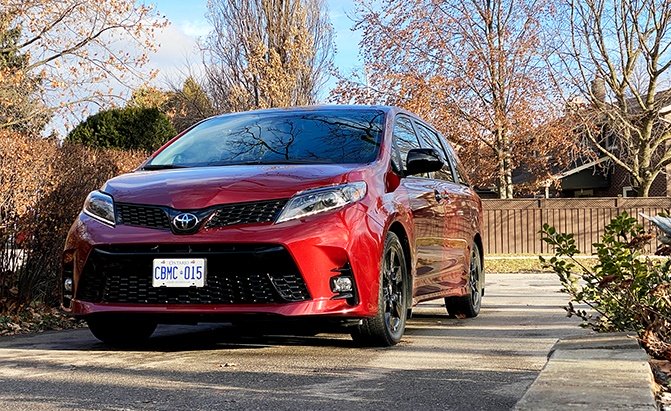 I’m not ashamed to admit this review started for purely selfish reasons. Being honest is important in this field, after all.

For my better half and I, the holiday season is an especially busy one, with half a dozen families to visit. We needed something to haul people and things in comfort. The market has seemingly decided the answer for that is a crossover, but I was determined to put the real practical option, the humble minivan, to the test. The Toyota Sienna remains one of the most popular of the breed, and a week with it went a long way to explaining why that is.

Whether it’s shuttling four adults and all their gifts to the next nog-fuelled party, or getting the little ones (and their friends) to soccer practice, nothing can match the sheer usability of a minivan.

You want space? The Sienna has so much you could list it as an apartment in NYC. Our tester came in the eight-seat format, but we ran it as a seven-seater during its time with us.  The middle perch of the second row is a tiny, removable seat, which stows away in a dedicated cubby in the trunk.

It’s a weird, contradictory feeling sitting up front: even resting my elbow on the door felt like a stretch, yet the Sienna was never unwieldy navigating city streets. Sight lines out of the big boy are clear, thanks to its comparatively huge expanses of glass versus something like the new 2020 Toyota Highlander. And let’s all agree that powered sliding doors are infinitely better for crowded parking lots.

Front row seats are supremely comfortable, making multi-hour highway drives easy-peasy. The middle row ain’t bad either: the $38,835 SE trims them in the same perforated leather as the front seats, and there’s enough fore and aft adjustment that even the lankiest of adults can get comfortable. Even the third row is fine for adults. It’s not ideal for three-abreast situations, or long distances, but it’s perfectly serviceable for toddlers and teens. There are more than enough cupholders for everyone in the back two rows, plus retractable sunshades should anybody doze off.

If you need to cram a full Home Depot shopping spree into the Sienna, the third row easily folds down into the floor. Unfortunately the second row isn’t so simple: unlike the Chrysler Pacifica’s Stow ‘N Go solution, the Sienna’s mid-mounted perches need to be manually removed. They’re hefty, despite the lack of power adjustments, and leave little vestiges of their tracks on the floor.

With only the two front-most seats in place the Sienna boasts a segment-best 150 cubic feet of space, meaning it should still be able to swallow sheets of drywall. But you’ll have to store those middle seats in the garage.

An Interior That Feels Its Age

The Sienna majors on quantity of space versus the quality of it. The dashboard design is simple, with large, easy-to-read controls plunked into the middle. The stitched upper panel of the dash does little to distract from the expanse of hard plastic in the center console. To its credit, the Sienna’s shifter is well-placed, with a slight tilt towards the driver to make it more ergonomic. The white-faced dials, exclusive to this SE trim, are easy to read too.

But the Sienna is the oldest van on the market, and that manifests in a few hard-to-ignore ways. There’s Toyota’s infotainment for one. The screen is smallish at 8.0 inches, and it’s so far away that it becomes even more difficult to use for the driver. It also doesn’t benefit from the introduction of Android Auto and Alexa integration most of the rest of the lineup enjoys for 2020 either. The seat heater dials are tucked way down low, alongside an ungainly covered USB connection. Higher trims offer niceties like a 16.4-inch widescreen display for the second row and Toyota’s Easy Speak, which uses a mic to project your talking voice across the cavernous interior.

The second-row booster seat connecting base is a small mound of ugly, cheap plastic permanently attached to the driver-side second-row chair. Stick to seven-seat layouts, including the class-exclusive all-wheel drive option, and that not only disappears, but makes travelling between the rows even easier. What it doesn’t offer is a way to slide the seats laterally a la Odyssey.

Just like you’d expect of any family-oriented hauler, the Sienna comes with a bevy of safety features. Automatic headlights, adaptive cruise control, lane-keep assist, lane departure warning, and automated front braking with pedestrian detection are all standard across the board. A blind-spot monitoring system plus rear cross-traffic is optional on the mid-grade LE and SE, then standard beyond those. Plump for the top-shelf Limited Premium and you’ll get a bird’s eye view camera.

One Smooth (but Noisy) Operator

Toyota’s Swagger Wagon is the relative speed demon of the sliding-door segment, with its 3.5-liter V6 engine pumping out a heady 296 hp. In front-drive form that’s enough to get up to highway speeds in less time than you ever expect. As befitting a giant box on wheels, wind noise is substantial, multiplying with each increment of the speedometer. There’s a surprising amount of engine noise in low gears too. The new Highlander I drove last month was much better in this regard. As the TNGA platform spreads across the Toyota lineup, (hopefully) including the next-gen Sienna soon, I expect NVH to improve.

While I could hear a lot of the outside commotion from inside the Sienna, Ontario’s notoriously poor roads did little to disrupt its ride. The SE’s supposed sportier suspension tuning offered a cushioned ride, even on 50-series, 19-inch rubber. The tires wrap black six-spoke wheels care of the Nightshade package. Just as it does on other Toyotas, speccing this $700 pack nets buyers a smattering of murdered-out trim, including the wheels, exterior badges, grille, and rear spoiler. Paired with the Salsa Red exterior it all added up to a surprising amount of relative curb appeal for a minivan.

I even caught a family member checking it out at one of the parties. He’s a father of two, currently driving a Civic hatchback. A crossover almost seems an inevitable part of their future, yet he was impressed by the Sienna’s looks, specifically those big wheels. It’s a far cry from the vinyl-and-wood-panelling minivans we all remember growing up in.

All the Sienna’s available thrust added up at the pumps: we recorded a little over 19 mpg during our time with the big brick. That’s what Toyota quotes for the front-driver’s city rating. It claims 27 mpg for the highway and 22 mpg combined, one off the Odyssey’s highway rating and one away from the Pacifica’s combined average. AWD models drop that to 18/24/20.

At the launch of the new Toyota Highlander, chief engineer Yoshinori Futonagane told me about how minivans remain relatively popular in the Japanese home market. He said a vehicle’s fitness for purpose is important there, and that there’s respect in driving the right tool for the job.

The Sienna is that sort of honest vehicle. For the purposes of toting a tribe and all their paraphernalia around it’s second-to-none within the Toyota lineup. It served as an oasis of calm during the holidays too, shrugging off everything we threw at it. One day it did its best Santa’s sleigh impression, a whole load of gifts Tetris’d into its cargo hold. 24 hours later it was chosen as the vehicle to shuttle five other people home from a different Christmas party in Toronto, because the Sienna’s spacious accommodations were preferable to—yep, you guessed it—a three-row crossover.

It’s not cheap, with a starting price of $32,685 (including $1,120 in delivery) making it $775 more than the newer Honda Odyssey. That’s a few thousand more than the Chrysler Voyager too, though that de-contented Pacifica lacks a lot of the standard safety features found in the Toyota. It can crest the $50k mark with a fully-loaded AWD Premium model, but in mid-range SE trim the Sienna offers a strong blend of safety, space, versatility, and proven mechanicals.