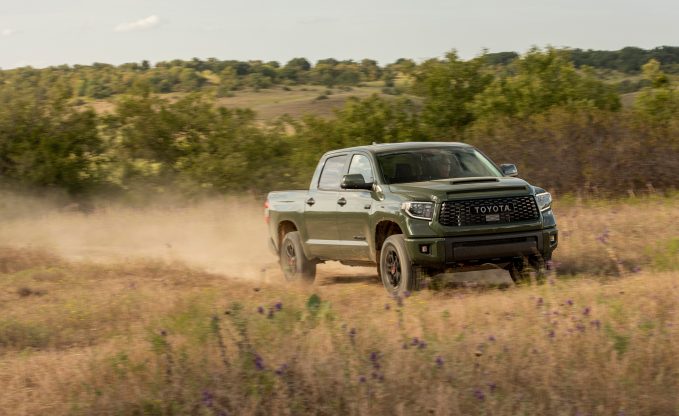 When an opportunity like driving a  2020 Toyota Tundra TRD Pro comes your way, you don’t say no. Especially when a certain bow-hunting trip in the wilderness of northern Ontario is a part of the equation.

Is the TRD Pro package necessary for a hunting trip? No, but it sure didn’t hurt and the new tactical looking Army Green seemed to fit the equation like a well knitted set of mittens. Our test truck was built around the 2020 Toyota Tundra 4×4 Crewmax SB which is one of the new toyota trucks for sale available starting this year. All Tundra models come standard with a 5.7L V8 engine that produces 381 horsepower and 401 lb-ft of torque. Controlling the power is a six-speed automatic transmission.

Because I live in Canada and it’s cold and snowy this time of year, Toyota Canada was kind enough to put on a set of Yokohama Ice Guard winter tires on our 2020 Toyota Tundra TRD Pro.

When I picked up the Tundra, the first thing that stuck out to me (besides the color) was the front end. The grille is massive and really makes an impression. The hood scoop is another nice touch and gives the truck more of a sporty yet intimidating appearance. I would prefer the scoop to be part of the hood rather than a piece added on, but that is an issue of the smallest order.

If you get down low, the two front tow hooks and TRD Pro skid plate offer a glimpse into this truck’s off-road intentions. A 10,000-pound winch would be a fantastic addition to the TRD Pro package, but for now you’ll have to settle for adding one on yourself. I’d suggest this one. A tow strap would also be worth keeping in the back seat. Some other add-ons I’d consider investing in would be a Tonneau cover, bed extender, and possibly an air intake system, depending where you drive.

I’m a big fan of the interior with those black leather seats and TRD red stitching throughout. And the center console is absolutely enormous. I used the rear seats primarily to house our bows and other hunting gear, so I can’t speak on comfort back there. But up front, the seats are very comfortable. And not only are the front seats heated, but they retain your settings even if you turn the truck off. So when you start it up again from the comfort of your home with the Toyota app (more on this in a minute), the seats will start to heat up and you’ll be greeted by a warm embrace. My only real complaint with the interior is that the steering wheel isn’t heated. It’s a small thing, but on cold mornings a warm steering wheel makes a big difference.

As for the Toyota app, It works rather well. Once it’s synced to the truck, it can display all the information you might need like fuel levels, trips, service due indicator, tyre pressures, you can also lock/unlock the doors and though there is a bit of a delay when you want to start the truck, everything else works like a well-oiled machine.

Hitting the highway in the 2020 Toyota Tundra TRD Pro was a pleasure. The truck drives fairly quietly at highway speeds, though that will likely change with more aggressive off-road tires. Steering is also really light – a pleasant surprise in a big, full-size truck.

Power on the highway was impressive. The Tundra gets up to speed without complaint and can make a pass with a light push on the go pedal followed by the pleasant V8 growl letting the slower vehicle know you mean business. The six-speed automatic transmission is a little old school compared to some of the eight and 10-speed transmissions out there. Having said that, it might be a bit hard on the gas but never lags behind in operation. The shifts are quick enough and I never found the Tundra slow to respond to my commands. It wouldn’t be a big surprise to see Toyota come out with a new transmission when the Tundra gets its next refresh, but I’m not sure how necessary it is for the vast majority of drivers out there.

As we were hunting in a few places I’ve never been to before, I took advantage of the Tundra’s navigation system more than once. It worked exactly how you’d hope it would with clear directions and a map showing where you need to go on the eight-inch touchscreen.

Once we got close to our hunting spots, the roads got sketchier, and the snow got a lot deeper. I still can’t say that we did enough off-roading to really put the Fox suspension setup through its paces, but we did find ourselves in spots where a lesser vehicle (smaller and without 4WD) would’ve likely been rendered ineffective. At one point, there was a hidden ditch on the side of a dirt road. It was hidden because it was filled with snow and level with the road. I found my front wheels in it at one point when I was turning around. Though my rear wheels were on some slick snow, putting the Tundra in reverse and using four-wheel drive to back out worked perfectly. Even while driving on snow, corrective maneuvering was minimal as the truck always held its ground. The damping was effective and the ride, even on the bumpier sections was almost sublime.

Though we didn’t end up near any mud (it would have been frozen) or rocks to play around in this time, I have driven a Tundra TRD Pro in those conditions about a year ago, which you can read about here. It’s a very capable off-road truck that went everywhere I asked it to go.

All told, the hunting trip in the 2020 Toyota Tundra TRD Pro turned out great. As we used the back seats for storage, I had plenty of room for our tree stands and a deer in the short bed, though if we had another person along, the full-length bed would have been more useful.

I’ll spare you the photos of the deer as not everybody is into that, but you can find some on the ArcheryTalk Facebook page if you really want to see them.