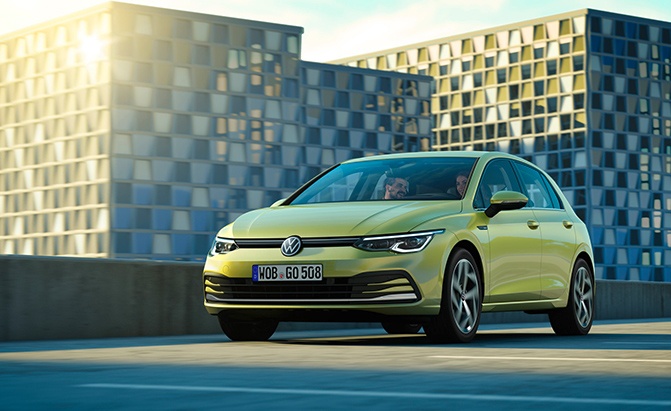 One of the automobile world’s juggernauts is reborn with this, the brand new MK8 Volkswagen Golf.

Volkswagen has taken the sheets off the new hatchback right at home in Wolfsburg. When it arrives on dealer lots the world over next year,  will bring with it cleaner engines, broader driving dynamic abilities and more connectivity.

Spanning 45 years of production and over 35 million examples, the Golf has weathered all manner of challenges. The Mark 1 arrived right after the oil crisis of ’73, whereas the Mark 7 has spent the last few years fighting the crossover onslaught. The Golf remains a classless sort of vehicle, appealing to buyers of all types, which is no doubt why it remains VW’s global best-seller. And why the MK8 has sizeable shoes to fill.

The new model is immediately recognizable as a Golf thanks to its familiar—albeit massaged—proportions. It once again sits on the MQB platform, which underpins everything from the tiny Audi A1 to the Volkswagen Atlas. The biggest changes happen up front, with the Mark 8 getting a stern-looking new face. Narrow headlights frame the front end, with a slim strip of LEDs within the grille giving the car a distinctive night-time visage. The shoulder line and C-pillar shutlines give the Mark 8 a classic Golf look in profile, culminating in slimmer taillights out back. Mercifully, the new model grows only a single inch from nose to stern.

Every example of the Mark 8 on stage was a five-door. That’s it for this generation: VW has stated less than 10% of buyers wanted a three-door for the Mark 7, so it’s not happening for the new car.

Bigger changes abound inside the new Golf. A 10.25-inch screen takes pride of place ahead of the driver, bringing a fully digital cockpit experience to the Golf. The standard infotainment screen measures 8.25-inches, with a premium 10-inch item also available. There’s not much in the way of traditional buttons in here, with VW offering “sliders” for certain features such as the sunroof. These allow occupants to swipe for an action instead of press and hold a button. A heads-up display will also be an option.

Regular person-to-car communication is apparently already old-hat here too. The Golf will feature Car2X, which uses short-distance vehicle-to-x communication to share information. The example VW used was that of an ambulance: if equipped with V2X tech, an unseen emergency vehicle could warn the new Golf of its presence before the driver even knows.

The Golf is going big on hybrid tech this generation, launching with no less than five dual-power models out the gate. Three of these, dubbed eTSI, use a 48V mild-hybrid system similar to numerous Audi models to produce 109, 129 and 148 hp.

Two plug-in hybrids also join the lineup. The eHybrid model boasts a healthy combined 201 hp, whereas the reborn GTE is up to 241 hp. Both feature a 13kWh lithium-ion battery capable of up to the 37 miles of electric-only range.

Regular gas and diesel options will be available too, alongside a natural gas option. The petrol lineup includes 89 and 109 hp options. Diesel models produce slightly more, at 114 and 148 hp.

A six-speed manual transmission is standard, with a shift-by-wire, seven-speed DSG auto available as an option.

We expect to see the higher-performance GTI and R models some time next year.

Deliveries will begin December 2019 for the German and Austrian markets. Other European markets will follow in early 2020. North Americans can expect the MK8 “soon”: the US will likely only receive the GTI and R high-performance models, while Canada will still get some manner of lower-spec model.