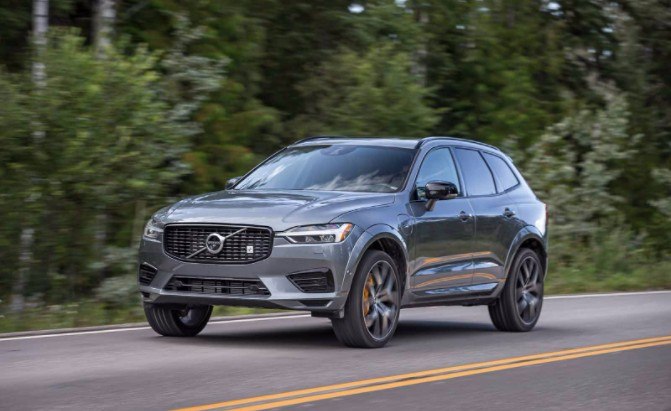 When Volvo announced that it would spin Polestar off into its own sub-brand, the Volvo faithful worried that it might mean no more Polestar versions of Volvos. Fortunately, Volvo has cleverly, if somewhat confusingly, sidestepped that problem by changing the name of its hotter cars to “Polestar Engineered.”

The first Polestar Engineered Volvo was the S60 and with its Öhlins dampers and its golden accents, it proved that the addition of “Engineered” to the Polestar name did not mean the subtraction of excellence. Now, Volvo is bringing out that car’s first stablemate, the XC60 Polestar Engineered.

A Little Excess for the XC60

Effectively a modified version of the crossover’s hybrid T8 trim, some clever computer tuning means that the Polestar Engineered gets an extra 15-odd hp and the same Öhlins dampers and bigger Akebono brakes as the S60 Polestar Engineered.

This is a good thing. Among the finest dampers in the industry, Ohlins dampers are championship-worthy technology on just about any racetrack. Although not as futuristic as the fancy magnetorheological dampers that adorn an increasing number of luxury-performance vehicles, Öhlins dampers are arguably the perfection of a well-known technology.

The secret is a dual-flow-valve. The DFV allows the fluid in the damper to move consistently in both directions. That means that when your wheel hits a bump, it not only bends to accept it quickly, it gets back onto the road just as quickly. That’s crucial for speed because the tire can only grip when it’s on the ground. The dampers are also remarkably comfortable, though, and the stability they provide gives you real-world, real-road confidence.

The dampers are also adjustable, but only through a dial on the actual dampers. That means that you have to get onto the ground and reach under the wheel well to adjust them, which could get your black turtleneck dirty. It’s a feature that’s extremely cool to people like your dear author—an avowed dumb-dumb who wishes he was Gilles Villeneuve—but I do wonder how many performance SUV-buyers will find it appealing.

Regardless, the dampers come well setup from the factory, so you only really need to adjust them if you really want to. Through the twisting roads outside Banff, Alberta, the XC60 felt exactly as sporty as it should have and was unbothered by any bumps that might shatter the sense of luxury that the interior promises.

Perhaps unsurprisingly, the drive isn’t quite as exciting as the S60’s—weight and height are, after all, working against the XC60. Despite a specially designed front strut bar, turn-in is somehow less rewarding than it was in the S60 PE, and that makes the whole drive feel a little less special. That said, it feels just as exciting to drive as its competition, namely the SQ5.

Volvo wasn’t shy about name-dropping Audi while it showed off the XC60, saying that the brand whose sales it has been stealing the most lately is Audi. And in horsepower especially, the Volvo comes out looking good. Thanks to its hybrid powertrain, it makes a whopping 66 more than the SQ5. And the special tuning means that the XC60 T8 Polestar Engineered also feels fast.

On a small airfield in the Rockies, we were allowed to give the XC60 the beans. Volvo claims the XC60 Polestar Engineered will hit 60 mph in just 4.9 seconds (SQ5 does it in 5.1) and after having buried the pedal in its plush carpeting, I can find no reason to challenge their claim. It takes off in a hurry and continues to pull hard all the way up to an electronically governed top speed of 140 mph. You will have no trouble merging onto a fast road from a stop sign. Nor will you have any trouble passing people on the highway. And if you just want to show off a little, you can do that, too.

Better yet, thanks to that electric motor pushing you along, the XC60 gets 57 MPGe combined, even in Polestar Engineered trim. The SQ5, meanwhile, gets just 21 MPG, according to the EPA. So you can be smug about that, too. And if we’re honest, being smug towards Audi-owners is all any of us wants in life.

Where the numbers don’t work quite as well for the XC60, though, are in pricing. Something had to give. With an MSRP of $71,050 (but an as-tested price of $73,490 thanks to the addition of metallic paint and 22” rims), it costs considerably more than the Audi, which can be had for as little as $52,400. You will get some help from the government when you buy it thanks to that hybrid powertrain, but no amount of help from the g-men will lead to price-point parity. If you were to apply the full $7,500 credit to the price, though, you can bring it down to $63,550, which is just a little more than the top-of-the-line SQ5 (which starts at $63,095).

The Volvo’s other big flaw remains its infotainment system. Although big and flashy, it remains just too inscrutable and Ikea-instructions-universal to be operated quickly. I will say that I have grown used to it and can now find most of the controls that I like, but I spent a good portion of my drive adjusting settings for my co-driver. It’s not a deal-breaker, exactly, but with infotainment systems becoming better and better, it may soon become one.

Can the Price Be Justified?

Ultimately, the XC60 is a very good base on which the Polestar Engineered department has done some very good work. The competition isn’t exactly bad, though, so whether or not you end up picking up this crossover will likely depend on how much you like the idea of a hybrid performance car. I happen to think it’s pretty cool, I can’t help but think that the type of turtlenecked person who might be in the market for one will think that saving the planet is cool, too.

It’s hard to find fault with the XC60 T8 Polestar Engineered from behind the wheel. It’s a very charming, beautifully designed car, that will happily give you your kicks without asking for a fortune at the pumps. From the dealership, though, the much lower starting price of some of the competition will look awfully tempting, too.