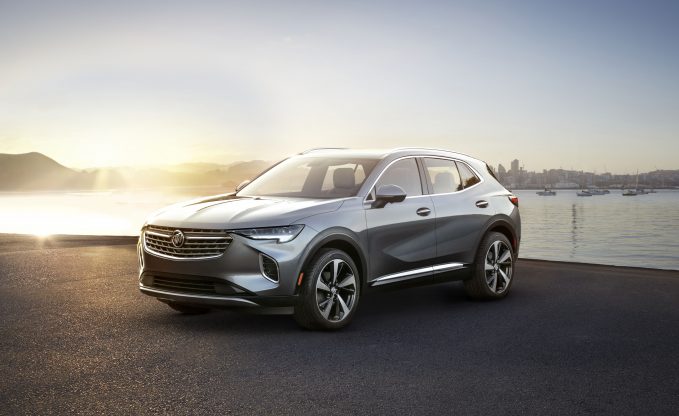 Buick has released the first official images and details of its 2021 Envision SUV. Those expecting a minor nip and tuck will be in for a rather rude awakening. To say that the 2021 Buick Envision looks striking would be an understatement.

Buick has completely overhauled its mid-size SUV’s design. The rounded-off design from the mid-2000s makes way for a sharp front-end with sleek LED headlamps and a muscular bumper around a rather prominent grille. The SUV is lower and wider than before and, dare we say, looks sportier as well.

But a new design is not all that the 2021 Envision offers. It will go on sale by early next year and prices will likely start north of $30,000. It will also offer a host of safety features as standard. Standard safety equipment will include automatic emergency braking (AEB), pedestrian detection, lane-keeping assist with departure warning, forward collision alert, rear park assist, and HD rear view camera.

For 2021 Buick will introduce its Avenir trim as a top of the line offering. It will also offer a host of convenience features, including automated assisted parking, 360-degree camera, front park assist, rear cross-traffic alert, blind-spot detection, a heads-up display, and a rear camera mirror. In-car entertainment will include a 10.0-inch touchscreen system that will come with Apple CarPlay, Android Auto and Amazon Alexa compatibility. Many of the aforementioned features will likely be optional extras or part of optional packages; some might even be exclusive to the top Avenir trim.

Buick hasn’t confirmed it but judging by the overall stance and the glasshouse design of the 2021 Envision, we suspect that the Envision shares its internals with the Blazer. Further evidence of this is the powertrain. Under the hood will be a 2.0-liter turbocharged four-cylinder engine paired with a nine-speed automatic transmission. It will probably be the same engine that joined the Blazer lineup this year. The powertrain is good for 230 hp and 258 lb-ft of torque and will likely come with both front and all-wheel-drive.