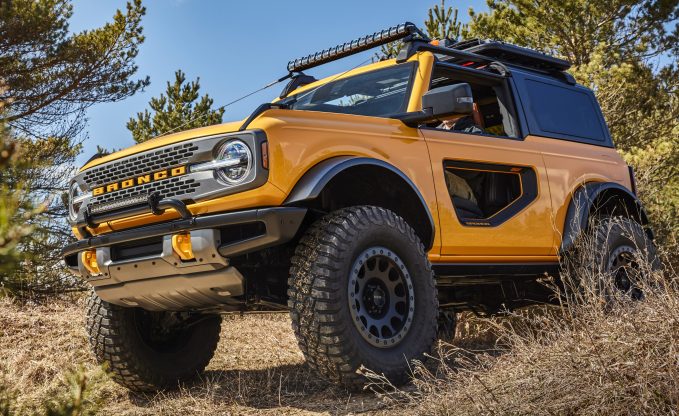 It’s a big day for Ford and nothing, not even the new Jeep Rubicon V8 concept could undermine the reveal of probably the most anticipated nameplate of the year, the Bronco. And Ford has unveiled not one but two Broncos for two separate segments. Well, three if you count the two-door as a separate model and not a trim. The two and four-door Broncos are the hardcore purpose-built off-roaders set to go up against the Jeep Wranglers. The Bronco Sport on the other hand, will rival the likes of the Jeep Cherokee. More on that here.

Did you know that you will be driving your car using VR and be part of the digital future? click for nvidia stuns to learn more about virtual reality in cars.

Prices for the Bronco start from $29,995 for the base two-door version and bookings are currently open on the Ford website for $100.

We would love to discuss the design in detail and how the front fascia harks back to the original Bronco especially with the round headlamp setup and that almost upright windscreen. Not to mention the contrasting roof which will be available in white along with some very vibrant paint schemes for the body. But we are itching to dive straight into the off-roading geek-fest that is the 2021 Ford Bronco.

By the Power of Dearborn

If you’re a purist and never fail to make a case for manual gearboxes, then the 2.3-liter motor will be the only option for you. For it is the only engine that will be available with a 7-speed manual transmission and it will be 6+1 crawler gear setup. The bigger V6 will be available with the 10-speed automatic only. However, you can opt for the AT with the 2.3-liter EcoBoost as well.

The Trims and Sizes

The Bronco twins will be available with seven trims as of now. To start off will be the Base ‘Bronco’ trim followed by thge Big Bend, Black Diamond, and the Outer banks while the Wildtrak and Badlands will be the top two trims with more focus on off-road capability than anything else. Ford will also offer a First Edition Bronco but it will have a limited-production run.

As strange as it might sound, the overall size of the Bronco twins differs according to the trim. The longest Bromco four-door is the Badlands trim at 190.5 inches in length while the shortest (Base) measures 189.4 inches. However, the Wildtrak trim is the widest and tallest at 79.3 and 75.2 inches respectively. The wheelbase though at 116.1 inches for the four-door and 100.4 inches for the two-door is constant regardless of the trim. As for the two-door, again, Badlands stands the longest and widest and Wildtrak the tallest.

The engine is only part of the package. What really affirms the Bronco as a true off-roader and a Jeep Wrangler rival is its high-end off-roading equipment. The standard transfer case will come with two-speed electronic shift-on-the-fly system while the optional one even integrates on-demand 4WD. We would give you the ratios but that would be a bit too geeky.

Also, a critical part of its off-road prowess is the Bronco’s standard Terrain Management System with its G.O.A.T or Go Over Any Terrain modes. Drivers will be able to select between seven different modes namely, Normal Eco, Sport, Slippery and Sand, Baja for mud and ruts and Rock Crawl for some advanced off-road driving. Bronco’s Terrain Management System also includes Trail Control, low-speed cruise control for trail-driving.

A little caveat here though, Ford claims that the Bronco boasts of an approach angle of 29 degrees and a departure angle of 37.2 degrees. It also claims a class-leading ground clearance of 11.6 inches and a water fording height of 33.5 inches. While the numbers are true it is worth noting that they only hold true if the Bronco has the 35-inch tire.

As for safety, the roll cage features integrated curtain airbags while the AdvanceTrac with Roll Stability Control comes in as standard. The twins will also get an optional Ford Co-Pilot 360 driver assist technology and the Trailer Sway Control.

The Ford Bronco twins will be perfectly at home in the city as they will be in nature. Also, it comes with frameless doors and a removable three-step, four-part roof which will allow its occupants to get a little closer to nature should they so desire. It will also come with bags to stow away the doors and roof panels in so as to prevent them from being damaged.

In addition, four-door models will come with a soft-top as standard and will be available with both soft and hardtop together as well.

Like its chief rival the Jeep Wrangler, Ford will also offer the Bronco Twins with almost hoseable interiors. A few trims will feature rubberized floors with integrated drains to make flushing water and dirt out easier. The seats too are made from weather and mildew resistant materials and all switches will have silicone surrounds to prevent damage water and dirt. So not too different from the Wrangler then?

Well, not quite. Ford will offer over 200 accessories to build a Bronco that is unique to each customer. Then there is stuff like attachment points that run the width of the dashboard and can attach devices like GoPro cameras, navigation devices, and the driver’s phones as well. In addition, the Bronco will also offer a 12-inch SYNC4 infotainment system. It will come with over the air updates and will also offer a 360 degree camera view with off-road spotter views to better help drivers navigate tricky terrains and rock trails. It will also feature more than 1,000 curated trail maps by NeoTreks so you don’t need to scour google for a good trail for a weekend getaway.