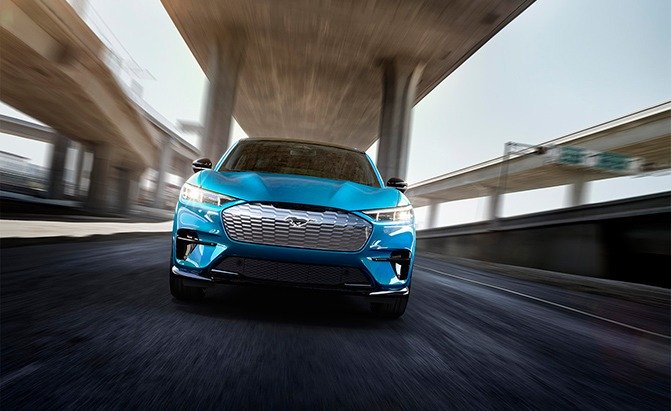 Here it is. After months of teasing—and a leak mere days before this—Ford is ready to show off the controversial new 2021 Mustang Mach-E.

At a glitzy event in Los Angeles, Ford debuted what’s easily the biggest change to the storied Mustang nameplate since its inception 55 years ago. The new Mach-E, a four- or rear-wheel drive, four-door electric crossover, will spearhead the Blue Oval’s $11 billion push into the production electric car market.

As the name implies, this new horse has plenty of familiar—if modified—pony car details. Up front, the timeless horse logo sits inside a hexagonal grille, flanked by two squinty headlights. It’s around back where the clearest influence is however, thanks to the Mustang’s triple-bar taillights, now bisected with a new element to emphasize the width of the Mach-E. The new-shape ‘Stang adopts the coupe-crossover profile that’s all the rage too. At 186 inches long it’s around half a foot longer than the 2020 Ford Escape, but features a wheelbase nearly 11 inches longer (117 in). The low center of gravity inherent to an EV should make it a much keener steer, however.

The 2021 Mustang Mach-E range kicks off with the Select trim. The earlier leak suggested an MSRP $43,895 for the Select, not including destination or any government rebates. For that price buyers will get a five-seat electric pony dishing out an estimated 255 hp and 306 lb-ft to the rear wheels. An all-wheel drive Select will be available as well: it ups the torque figure to a stout, Mustang GT350-matching 429 lb-ft.

The Select will come in Standard Range form only, translating to roughly 230 miles on a single charge (or 210 for the AWD version). Ford is targeting a 0-60 mph run in the mid-sixes for the two-wheel drive version: the all-paw will slash roughly a second off that.

Next on the pecking order is the Premium edition (MSRP: $50,600). It starts with the 255 hp Standard Range RWD setup, but also introduces the Extended Range (ER) battery option. In the RWD Mach-E that boosts horsepower to 282 hp and range to 300 miles; opt for four-corner power delivery and it’s up to 333 hp and 270 miles of range.

Sitting in the middle of the five initial trims is the California Route 1. It sticks to the rear-drive ER setup of the Premium, ringing in at $52,400.

Top of the pile is a GT trim at $60,500, because there are some traditions that just shouldn’t be tampered with. The GT was the end-of-show surprise on Sunday evening, rocking electric blue paint, a unique body kit, and 20-inch multi-spoke wheels. Ford isn’t just throwing those two letters on that dramatically-sloped tail and calling it a day, either.

There will actually be two GT models. Both the “normal” GT and GT Competition will produce 459 hp, just one pony shy of the current V8-engined Mustang GT. Torque is even more substantial at 612 lb-ft. The Mach-E GT manages these figures thanks to a 98.8 kWh battery pack; a 75.7 kWh lithium-ion battery is used for the Standard Range. Ford’s adaptive MagneRide suspension system is also standard in GT Performance guise. The gallop to 60 mph will happen under four seconds for both GTs, with Ford quoting mid-3s for the GT Performance.

The Mustang Mach-E follows the unspoken tenet of EV design: thou shalt have a big ol’ screen. Ford’s stuck a massive 15.5 inch item right in the middle of the five-seat interior. It features the latest evolution of SYNC, plus—thank goodness—a physical control dial. Ford is calling the Mach-E’s setup its most intuitive user interface yet, thanks to the ability to learn a driver’s preferences via machine learning. With a paired smartphone it can automatically save and set user preferences too. The phone can even be used as a key itself.

Despite that sloped roofline, footage from the reveal suggests a decent amount of space for back-row passengers. Thanks to the move to electric, this will be the first Mustang with a frunk too. It’s a 4.8 cubic foot cubby, enough to store a carry-on. Traditional trunk space sits at 29 cubic feet, expanding to 59.6 with the rear seats folded.

The 2021 Ford Mustang Mach-E will start at $43,895 and rise to at least $60,500 before options and rebates. Interested? Reservations are already available on Ford’s website via a refundable $500 deposit. Most Mach-E models will launch at some point next year; the GT will wait a little longer, showing up early 2021.

That price tag puts the Mach-E in a unique part of the market: it offers on-paper performance that outguns Audi’s E-Tron or the Jaguar E-Pace, while offering more space than the closer-in-price Tesla Model 3. Expect this to be the first of many all-electric vehicles over the next few years from Ford, including an F-150.

Have the official details swayed you on the latest evolution of the Mustang? Let us know in the comments!