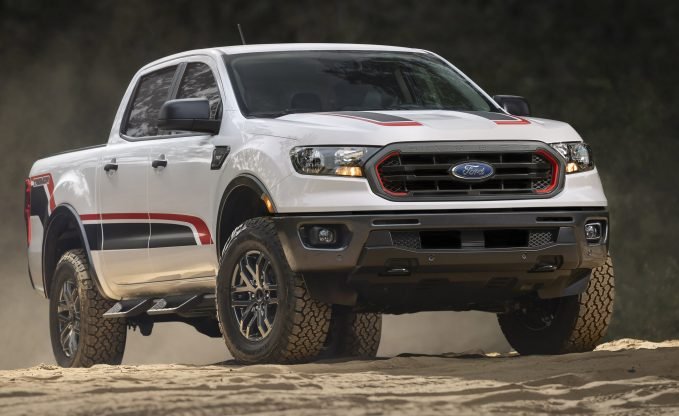 New FOX suspension and a whole lot of off-road cred.  Ford already offers F-250 and F-350 Super Duty trucks with it. It was only a matter of time before the hardcore ‘Tremor’ trim trickled down to the relatively humble  Ranger lineup of trucks. The 2021 Ford Ranger Tremor package is only available on the Ranger Lariat and XLT trims with the Super Crew 4×4 configuration only. The Tremor treatment adds $4,290 to the overall price of the car. But for the price of an old Honda Civic you get some serious off-roading kit.

For starters, the Tremor package adds 32-inch off-road Continental General Grabber A/TX tires shod on 17-inch magnetic painted wheels. It also adds suspension lift and raises the ground clearance to 9.8 inches which is 0.8 inches higher than the standard Ranger Super Crew. The front suspension on the Tremor offers 6.5 inches of travel while the rear suspension boasts of 8.1 inches of travel. As for the serious off-road kit, you get a FOX 2.0 monotube damper set along with specially tuned shocks and a frame-mounted steel bashplate for when things get serious.

The Tremor trims also come with Ford’s Terrain Management System with Trail control as well which allows drivers to choose between four off-road driving modes. It also gets a new traction control system that aids the truck gain traction in the gravel and also aid acceleration. But by far the best piece of off-road tech on the Ranger is the six-switch auxiliary power bank. It is a separate battery system with rated loads of 25 amps, 15 and 10 amps and three rated for 5 amps. These switches control add-on accessories like winches, light bars and air compressors.

All Ranger Tremor models will be available with the same 2.3-liter Ecoboost engine which makes 270 hp of max power and 310 lb-ft of max torque and sends power to all four wheels via a 10-speed automatic transmission. The production for the Tremor will begin in Early 2021 so expect the off-road worthy mid-size Ford truck to hit the showroom floors by Spring of 2021. Oh, and did we mention it is likely aimed squarely at the Jeep Gladiator? Now you know.