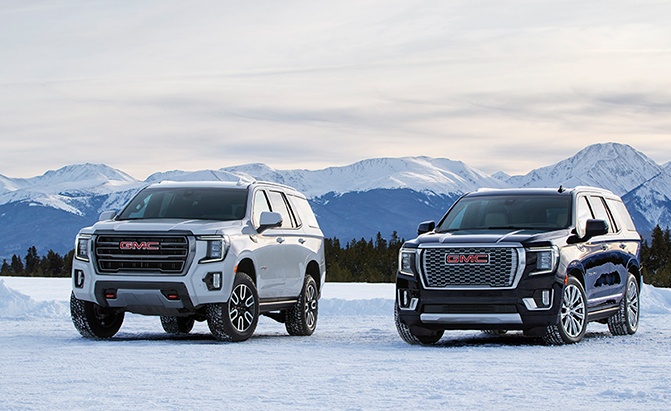 General Motors’ zero-cars brand—GMC that is, not Buick—has shown off the latest members of the SUV scene, the 2021 Yukon and Yukon XL.

It was only a matter of time before we saw the fancier truck division sharing its biggest models. After all, Chevrolet got the ball rolling with the reveal of the 2021 Tahoe and Suburban just over a month ago. And soon enough, we’ll see the ultimate luxury version of the platform in the shape of the Cadillac Escalade (and its enormous dash display).

Like its Bow Tie brothers, the reborn Yukon adopts an exterior design more in keeping with the pickups it shares dealer space with. The rectilinear redesign incorporates the brand’s C-shaped head- and taillights, both of which use LEDs. The chiselled looks stretch over a larger platform for both the Yukon and extended-wheelbase Yukon XL. Length is up 6.1 inches for the regular Yukon and only 0.9 inches for the XL, bringing them to 210 and 225.2 inches, respectively: both slightly shorter than the Chevy twins. Storage capacities are the same across the brands, at a truly cavernous 122.9 and 144.7 cubic feet.

The gains in storage space are in part thanks to the adoption of an independent rear suspenion—also like the Chevrolet models. The added benefit here should also be vastly improved ride quality. The available adaptive air suspension should help there too, while also offering added ground clearance of two inches for the AT4 trim.

That’s right: GMC’s popular off-roading trim joins the Yukon lineup for 2021. Like the Sierra AT4, the Yukon AT4 sets itself apart from the lineup with unique 20-inch rims wrapped in Goodyear all-terrain tires, skid plates, body-color or dark trim accents, and a pair of red tow hooks. Inside, overlanding enthusiasts can make use of a Traction Select System with dedicated off-road mode and Hill Descent Control.

Returning to the fold is the Denali trim, which sticks to the recipe of offering plenty of chrome outside and an interior draped with leather and wood. Denali buyers—who have traditionally accounted for roughly 60 percent of Yukon sales—can select one of four interior color schemes. The seats are also trim-specific, as is the dash architecture itself, an unusual move in the industry. Instead of the rest of the lineup’s “floating” infotainment screen placement, the Denali moves the 10-inch screen lower into the dash design, stacking a pair of vents on top of it. Both sit beside a push-button transmission selector.

Propulsion duties are handled by a 6.2-liter V8 in Denali trim, making 420 hp and 460 lb-ft. It’s optional on other trims, with a smaller 5.3-liter fitted as standard producing 355 hp and 383 lb-ft. New for 2021 will be the 3.0-liter inline-six diesel engine, worth 277 hp and a V8-matching 460 lb-ft. All three engines hook up to a 10-speed automatic transmission. While the oil-burner should be the mileage king of the lineup, cylinder deactivation in the V8s will allow them to run on as few as two cylinders at a time when possible.

Magnetic Ride Control is standard on the Denali, with options including 22-inch wheels, a panoramic sunroof, and the afore-mentioned adaptive air suspension. It also includes 15-inch heads-up display and no less than nine exterior cameras, plus rear pedestrian alert. A handy powered sliding center console can slide back 10 inches to increase front-row storage space. It’s available on the Denali, AT4 and SLT.

Hauling the Yukon into the new decade is an improved list of driver assist tech. Forward collision assist, hill hold, pedestrian detection and emergency braking are all standard, on all trims. Adaptive cruise control and lane-keep assist are both on the options list, as is a 360-degree view camera.

More info on the Yukon and Yukon XL, including pricing, should be available ahead of the trucks’ on-sale date this summer.