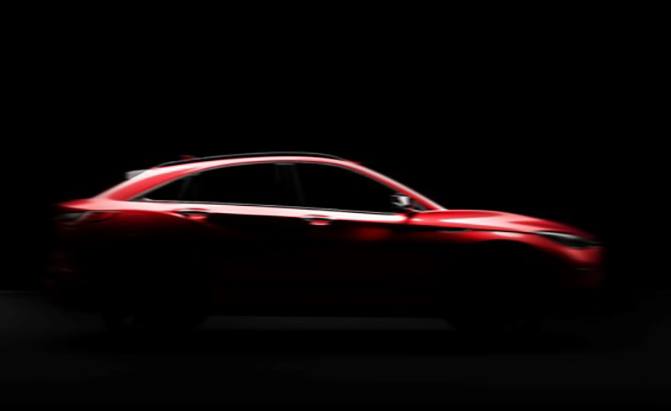 To commemorate its 30th year in operation in the North American Market, Infiniti today announced that it will add a new model to its lineup called the QX55. It will be based on the QX50 but will feature a “sportier” and coupe-esque design. In the preview image however, the roofline looks much less coupe-like than other SUV coupes on the market like the BMW X6. The flatter roofline however should translate into better headroom at the rear. Despite the flatter roof, the QX55 still features a fastback style liftgate, a short rear windscreen, and a rather large roof spoiler.

It also bears a striking resemblance to the Infiniti FX SUV which in Infiniti’s own words; “was the first crossover to fuse sports car design with SUV practicality.” The FX with its long hood and a pushed back cabin looked sportier than any other SUV on the road at the time. We are sure Infiniti is trying to recreate that bit of magic especially since then BMW and Mercedes have debuted sporty and quirky SUVs in the form of the X4 and the GLC coupe.

The QX50—our reigning Reader’s Choice Luxury SUV—is currently offered with a 2.0-liter turbocharged four-cylinder engine with variable compression ratios and it will likely be carried over to the QX55. But at this point, we are unsure whether Infiniti will go with the FWD-CVT combo or opt for the AWD configuration. We can state though that the QX55 will feature a higher state of tune as far as the powertrain is concerned.

Although Infiniti has not confirmed what the interior of the QX55 will be like, we can speculate that it will probably feature bucket-style seats for added sportiness, probably a flat-bottom steering wheel with red stitching and generous use of brushed aluminum in the cabin. It will likely feature Infiniti’s In Touch infotainment system paired with Bose Sound as well. Finally, it will command a premium pricing over the QX50 when it launches in 2020.