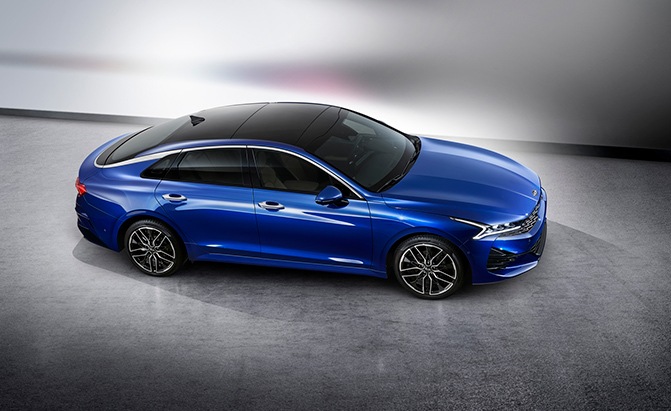 Kia will drop the Optima name for its new mid-size sedan later this year, if a recent EPA fuel mileage listing is any indication.

It looks like the Kia Optima will soon be no more, at least in name. For months rumors have swirled that Kia would retire the name and adopt the K5 badge for the car, which it uses in the South Korean market. We now have the firmest evidence yet of this, with the EPA listing the fuel mileage for the 2021 Kia K5 on its website.

The listing also confirms another feature, however: all-wheel drive. According to the EPA, the 2021 Kia K5 will send power from its 1.6-liter turbocharged inline-four to all four wheels. If that’s the same engine found in the 2020 Hyundai Sonata—which we recently reviewed—then that means roughly 180 horsepower and 195 lb-ft of torque. The Sonata’s eight-speed auto is also present.

Compared to its Hyundai sibling, the K5 posts slightly lower EPA figures: it sits at 29 mpg combined, with 26 city and 34 highway. That’s down 2 mpg combined and on the highway, and a single-digit change for city driving. It’s pretty on par for the class in terms of all-wheel drive models however. The 2020 Toyota Camry AWD matches the Kia in combined and highway ratings with a 25 mpg city number. Meanwhile the Subaru Legacy is 1 mpg better across the board on all three measures.

This drivetrain is the only one the EPA has listed so far, but we expect multiple options for the K5. The Sonata’s naturally-aspirated base four-cylinder is a likely candidate, as is the more powerful 2.5-liter turbo motor slotted under the hood of the 2021 Genesis G80. That engine will also find its way into the Sonata N-Line, which will remain front-drive. The available all-wheel drive of the K5 looks to be the big mechanical differentiator between the two cars this generation.

It’s currently unclear if the K5 name change signifies a more concerted move to alphanumerics for Kia as a whole. The K900 is known as the K9 in South Korea, while the Forte and Cadenza are K3 and K7, respectively.

With the new name and new looks, the Kia K5 will arrive in dealerships later this year.